You may have heard about fires in Australia, the Amazon, or in California, but some of the worst wildfires are actually happening in the places you’d least expect. One of these places is Siberia, in northern Russia. Some of the threatened forests are so far north, they’re inside the Arctic Circle.

If the Arctic being on fire wasn’t a shocking enough reminder of climate change’s impact on the planet, the further damage the fires pose in terms of emissions is horrifying.

Just this year, fires in the taigaThe taiga is a forest of the cold, subarctic region. The subarctic is an area of the Northern Hemisphere that lies just south of the Arctic Circle. The taiga lies between the tundra to the north and temperate forests to the south. Alaska, Canada, Scandinavia, and Siberia have taigas.forests of Siberia alone pumped 970 megatonnes of carbon dioxide into the atmosphere between June and August. This was more than all the forest fires in the rest of the world put together. 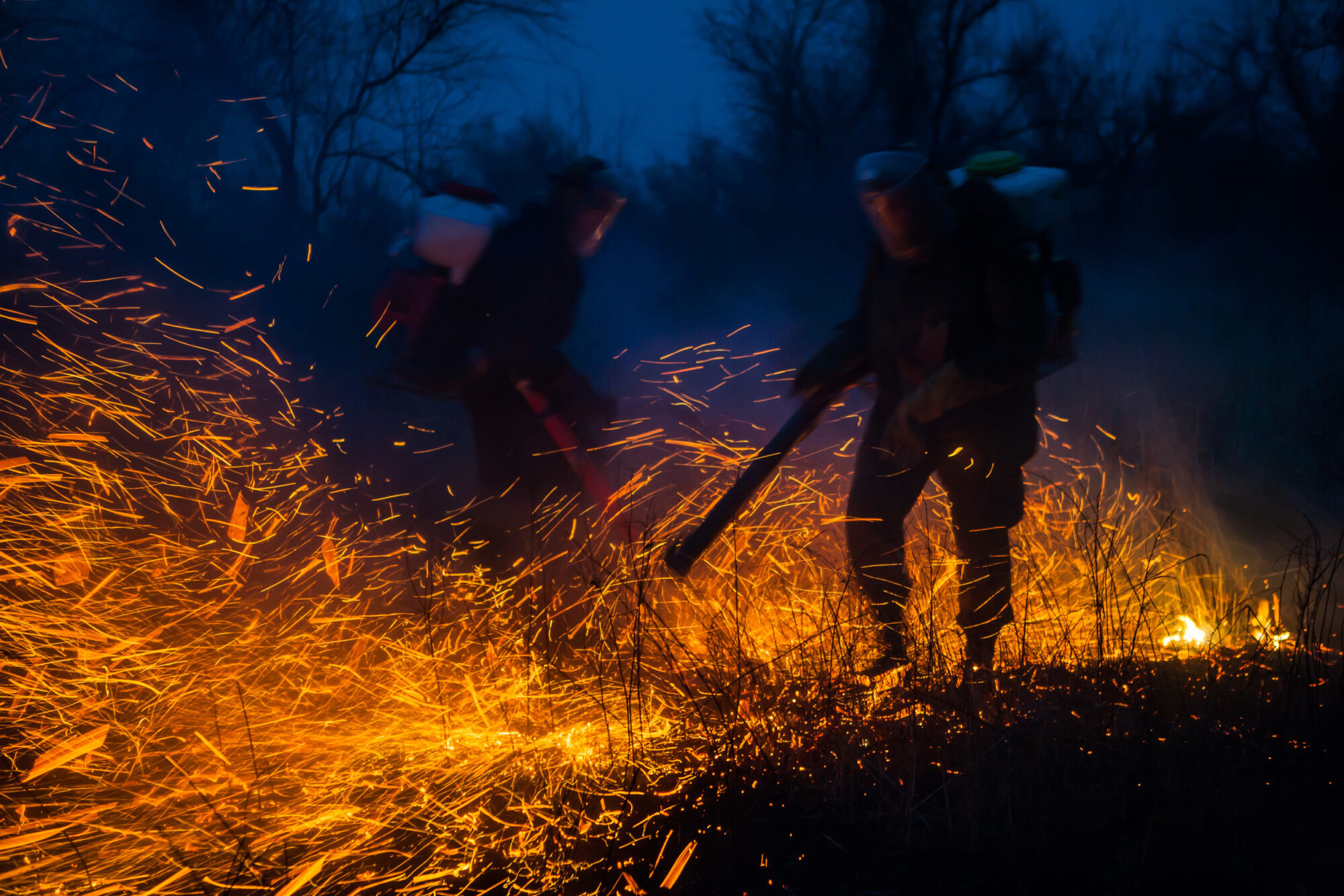 Volunteers try to extinguish dry grass fires in the Astrakhan Reserve. The spring burning of dry grass in Russia is a big problem with which forest and fire departments have been struggling unsuccessfully for years. Unlike forest fires, some of which may be due to natural causes, grass burns are manmade nearly 90 percent of the time. © Igor Podgorny / Greenpeace

Grigory’s team trains and groups volunteers, who he says are “real patriots… lots of young people who want meaning for their lives”. The tradition to volunteer for the good of the country comes from WWII, when Russians rallied to protect their land from Naziism.

The fight must feel as monumental now as it did then. These forest fires – plus fires on land with grass, reeds or tundra – could make Russia’s total area burned this year as high as 30 million hectares, Grigory estimates. That’s an area the size of Italy or Poland. The scale of the problem means Greenpeace firefighters now work closely with national brigades.

The problem is made worse by a lack of investment in preventing and fighting ever-larger and more damaging fires – and that’s where Greenpeace supporters are making a difference.

One of many projects worldwide funded by gifts in Wills through the Greenpeace Environmental Trust) involves training firefighters across Russia. And it’s getting results. In the Astrakhan region, the number of damaging wildfires fell significantly after Greenpeace organised firefighting expeditions. 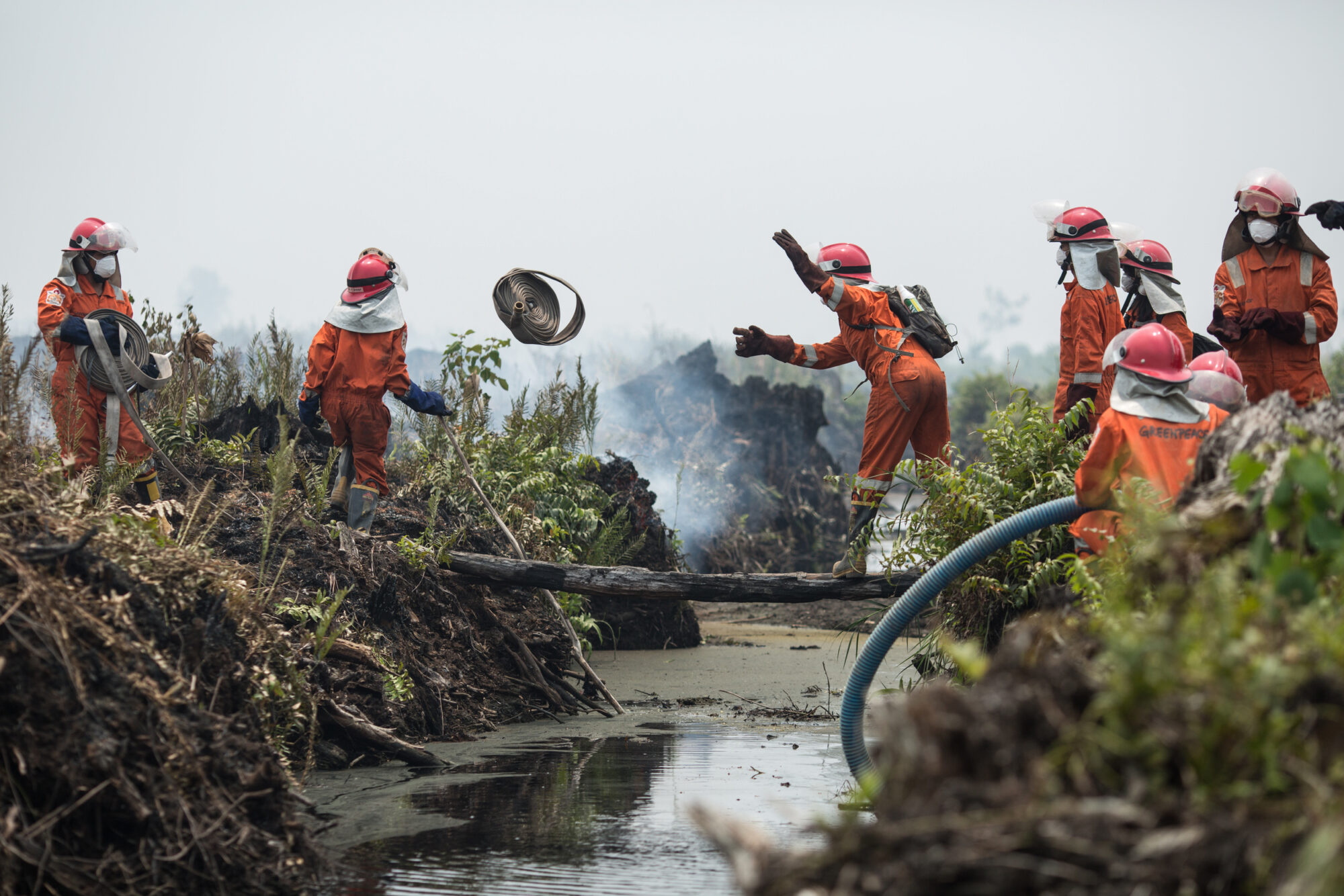 Greenpeace Forest Fire Prevention Team extinguishes a fire at a peatland area in West Kalimantan. The FFP team is deployed in the peatland area to suppress the fire and carry out investigations. © Rendra Hernawan / Greenpeace

Siberia’s unrelenting peat fires are the most dangerous for the climate. Peat fires generate enormous emissions, because peat has been absorbing carbon for tens of thousands of years. This explains the high emissions recorded in Russia this year.

Another part of the world that has seen alarming increases in peat fires since the mid-2010s is Indonesia. While in Russia people start fires to clear land for small-scale farming or to cultivate timber for export to China, in Indonesia the problem is palm oil corporations.

Palm oil cultivators selling to major companies (many of which are household names here in the UK) set fires in peatlands to clear it for oil palm plantations. These fires then rage out of control – spreading air pollution across Asia and destroying important orangutan habitats.

Indonesia’s fires first made global headlines in 2015, severely affecting air quality for over 28 million people in Southeast Asia and afflicting 140,000 with respiratory illnesses. By 2019, Unicef was warning that the air pollution from the country’s yearly fires were putting 10 million children at risk, forcing schools to close as skies turned blood-red.

Everyone has their own story as to how the fires impact their lives or that of their families, and which ultimately led them to volunteer.

Sola Graeia Sihaloho, a student at a university in West Kalimantan and Greenpeace volunteer firefighter in Indonesia, has many friends that fell sick due to the haze. One friend was vomiting blood and had to be admitted to the hospital. Her friend survived, but others weren’t so lucky. 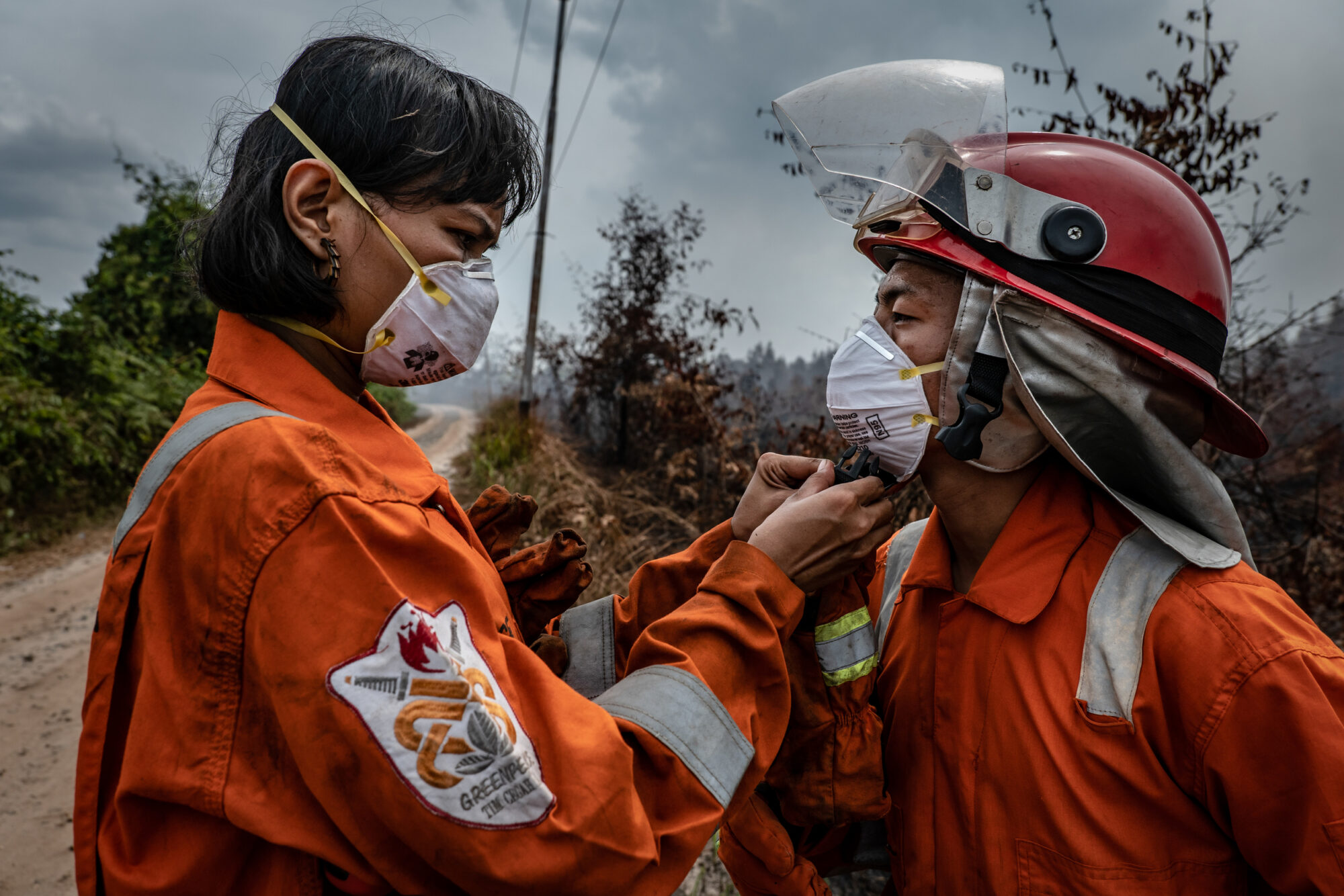 Greenpeace firefighters work on many fronts

In both Russia and Indonesia, climate change is definitely making these fires worse. But the fires are mostly lit deliberately.

In Russia, fires are lit to hide illegal timber lumbering or free up more land to grow wood for export, as well as more traditional agricultural burning. Grigory says that his team’s efforts to advocate in communities of the benefits of clean air and leaving biodiversity intact have made agricultural burning much more frowned upon in the region. Their community work teaches people to water land so it’s less susceptible to fire. The volunteer firefighters are even changing the way Russians feel about Greenpeace, and have led activists to start calling for a total ban on timber exports to China.

In Indonesia, Greenpeace supports local communities that want to put a stop to the destruction. “We want the voice of the little people to be heard, we don’t want big investors coming here and causing us to suffer just for the benefit of a few”, Ira Sahroni, a local farmer in West Kalimantan told the BBC in 2018.

And Greenpeace firefighters even take special training to learn how to treat orangutans and other rainforest animals when they are found as victims of forest fires during rescue missions. 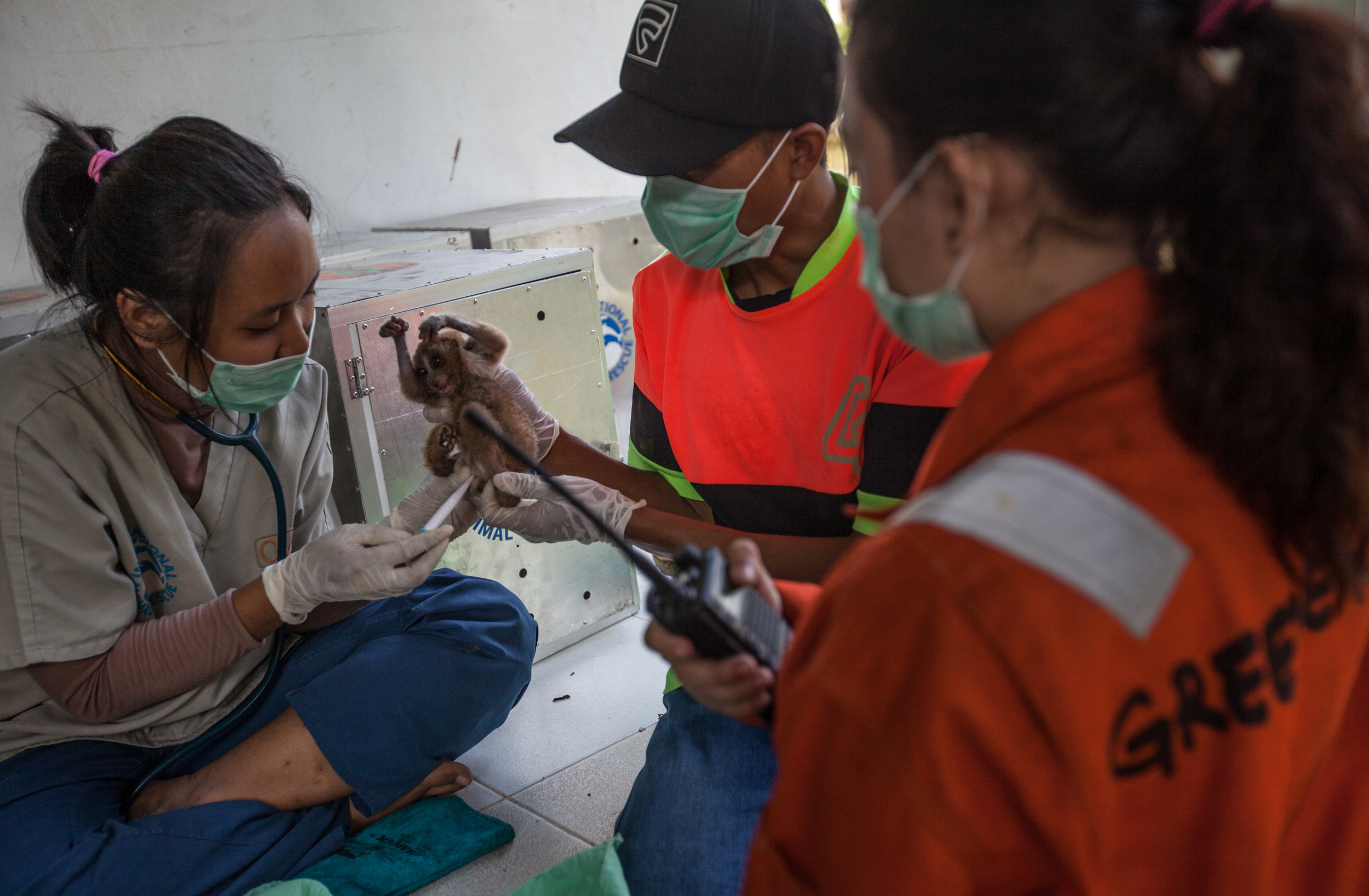 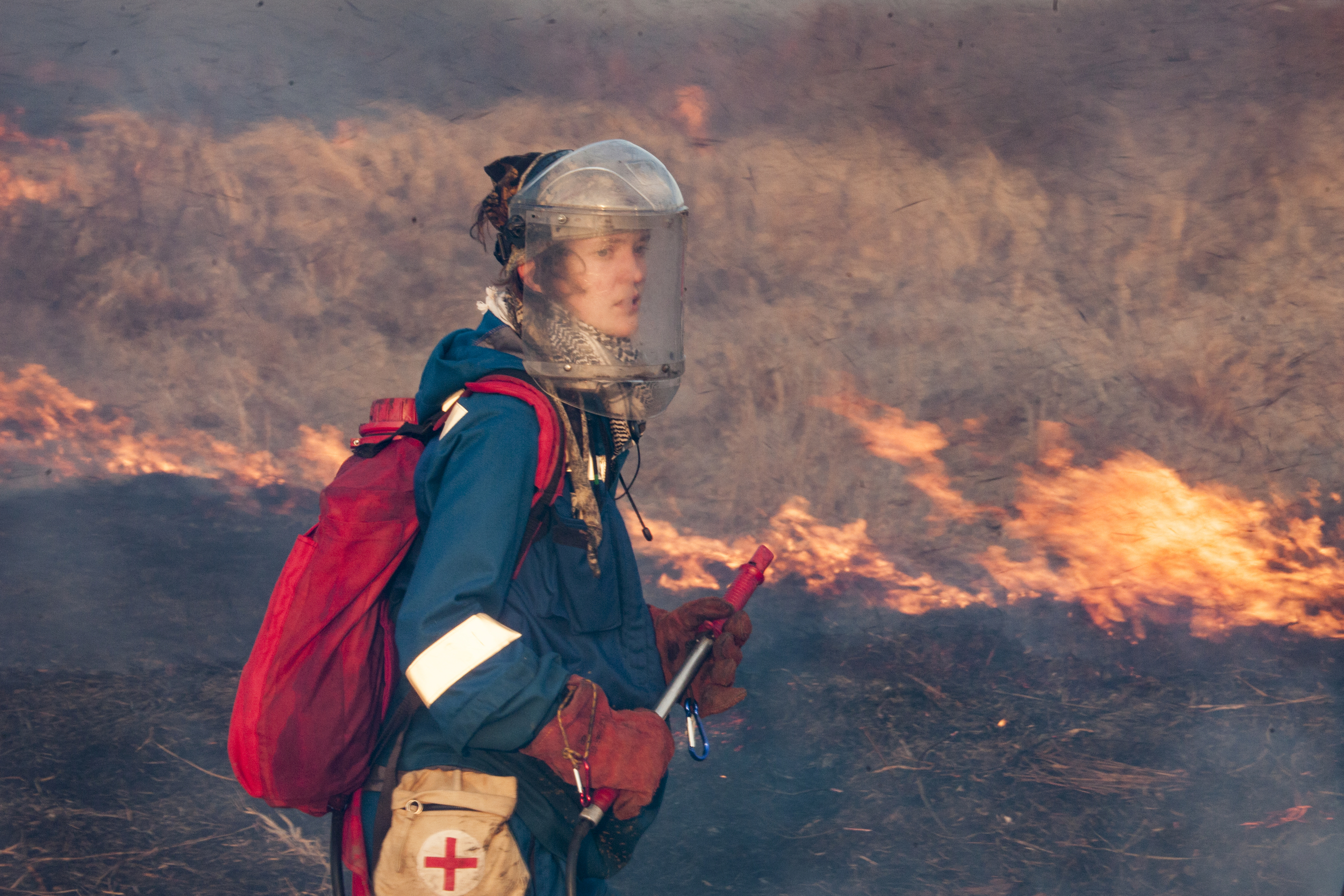 What does the future look like for volunteer firefighters?

From the Arctic to the Tropics, Greenpeace’s volunteer firefighter brigades have a huge job: showing up when fires rage out of control, but also advising local communities and advocating for fire prevention. They’re on the frontlines of climate change working powerfully against destructive corporate greed.

Greenpeace will continue to fund this vital work and tackle the root causes of deforestation. Leaving a gift in your Will to Greenpeace not only protects the future of our planet, but people living on the frontlines of climate change right now through training programmes and initiatives just like this.

No matter the size, every gift provides crucial funds for this work to continue. Find out more about the impact your legacy will make to the natural world.