Supermarkets still aren't doing enough to reduce plastic - but who's making the most progress? And how has the pandemic changed things? Find out where your supermarket ranks in the latest plastics league table.

Up to 12.7 million tonnes of plastic enter the oceans every year, and plastic pollution is now the biggest killer of marine life. Supermarkets are playing a major part in this tragedy, but they can also be a major part of the solution.

They’ve been talking the talk when it comes to reducing plastic – making pledges and commitments – but more importantly, have they been walking the walk?

For the third time Greenpeace has teamed up with the Environmental Investigation Agency (EIA) to dig deeper into what supermarkets are really doing to cut plastic. Let’s take a look at our updated league table!

You can find out more about how and why the supermarkets were ranked this way in the full report here.

How has the pandemic affected supermarkets’ use of plastic?

When ranking supermarkets on their plastic footprints we collected the latest data available from 2019. But what happened in 2020?

It’s time to address the elephant in the room – Covid-19. The tragedy that has unfolded in front of our eyes has impacted everyone, including supermarkets.

Near the end of last year – in partnership with the EIA – we interviewed nine of the biggest UK supermarkets to help get a sense of how COVID-19 was impacting progress on reducing plastic.

Use of plastic increased in some areas, and decreased in others

Panic-buying, increased demand and issues with supply chains forced them to loosen packaging requirements. Non-recyclable black plastic and plastic egg boxes made a return. However, the original packing requirements did go back to normal in most cases after the first wave.

In some cases the disruption actually led to a decrease in plastic. Pieces of packaging like yogurt pot lids became unavailable, which helped supermarkets to realise that they weren’t necessary after all!

Supermarkets reported a drop in sales of loose fruit and vegetables. This was likely due to fear of the virus being on produce, even though experts say there’s no evidence of coronavirus being transmitted via food or food packaging. Fortunately, this seems just a phase and supermarkets say shoppers are back to buying loose again.

One change you might have guessed was a big increase in online shopping, which is expected to remain after the pandemic. It’s a huge opportunity to reduce plastic. Just last year Tesco partnered with Loop, who uses completely reusable packaging, which is returned, cleaned and reused. If supermarkets replicated this on a large scale they could ditch thousands of tonnes of plastic.

It’s fair to say that COVID-19 has been a setback in the fight against plastic pollution. But from what we can tell, there’s still an appetite from supermarkets to reduce single use and unnecessary plastics.

Shoppers still care about plastic – and change is on the way

Despite the pandemic, plastic packaging is still at the forefront of shoppers’ minds. As you can see from our league table, supermarkets have lots to do if they’re going to stop fuelling the problem and start solving the problem.

Aldi and Sainsbury’s have committed to halving their plastic footprint by 2025. Greenpeace is urging the other major supermarkets to do the same. Increasing ambition on reusable packing and refill stations in-store is vital to reducing throwaway plastic. So Greenpeace is also calling for 25% of packaging to be reusable by 2025, and 50% reusable by 2030.

Trials in reuse and refill are picking up pace across all UK supermarkets. Last year Asda opened a sustainability store in Leeds, which uses refill stations to give shoppers plastic packaging-free groceries. The store stocks big brands like PG Tips, Kellogg’s, and Persil, as well as own-brand staples like pasta. Asda says the store will cut around one million pieces of plastic per year.

If Asda and other supermarkets roll out schemes like this across the UK, it will go a long way to properly reducing plastic packaging.

The biggest supermarkets must lead the way 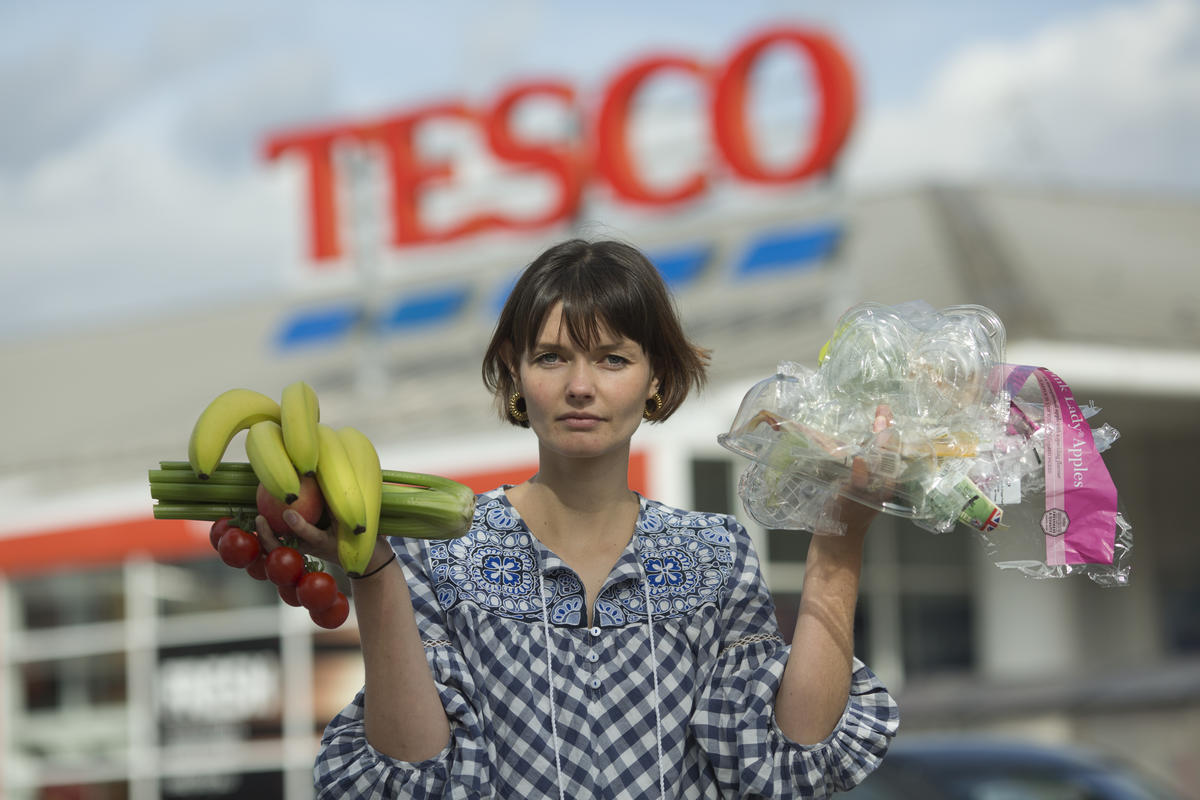 Shoppers take the single-use plastic wrapping off their bought fruit and vegetables outside Tesco in London. © John Cobb / Greenpeace

Tesco, Sainsbury’s, ASDA, Morrison’s and Aldi are the five biggest supermarkets in the UK. Because they have more stores and more customers, they produce a lot more plastic than some of the other supermarkets in the league table. That means they have a responsibility to lead the way – and an opportunity to have the biggest impact.

The pandemic has been a testing time for supermarkets – in particular their frontline staff – but they have also been making massive profits.

These profits shouldn’t be lining the pockets of executives or shareholders. Instead supermarkets have a responsibility to build back better from the pandemic.

Greenpeace has even given supermarkets all the solutions they need to halve their plastic footprints. The time for talking is over, in 2021 we need to see more action! 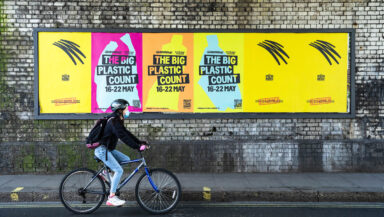