Green transport isn’t just about closing roads to cars or putting in bike lanes – leaders need to be much more strategic than that. And when local councils don’t think equally about everyone that uses the roads, even the most well-meaning schemes can fall flat.

So what’s the secret to a successful transport system, one that works for most people? And how can changes be made in as clean, green and fair way as possible?

Here’s a dive into 11 places around the world where the city planners and politicians really got transport right. These schemes have not only helped save lives and reduce carbon emissions, but are also improving daily travel for millions of people.

1. Building a bike culture in the Netherlands

The Netherlands has a strong cycling culture, and the country boasts an enviable 22,000 miles of cycle paths. But it wasn’t always so. In the 1950s to the 1970s, cycling fell out of favour as more people could afford cars. This led to staggering levels of traffic casualties – with a peak of 3,300 deaths in 1971, including more than 400 children.

Determined activists and government experiments turned the tide. Driver liability is now fixed in law – so drivers are assumed to be responsible in case of a crash with a bike. This forces more cautious, respectful driving. Cities build beautiful bridges just for pedestrians and bikes. And it’s rare to see a major road without a protected bike lane running alongside.

But it’s not just about the big things. The ‘Dutch reach’ – opening a car door with your opposite hand so as to naturally look over your shoulder for oncoming bikes – saves many lives. It is now also in the UK’s Highway Code.

It definitely takes time to change car-culture. But for the lives it saves, it is surely worth it.

Oslo’s council began removing parking spots from the city centre in 2016. Now, there’s only parking for disabled drivers and there are nearly no cars in the centre at all. Exceptions are made for emergency vehicles and delivery vehicles for a couple of hours each morning.

There was some backlash, and accusations of interfering in people’s freedoms. Hanna Marcussen, Oslo’s vice mayor for urban development, sees it differently: ‘In many ways not restricting cars is limiting the freedom of other people. Cars make it more difficult for children to play in the street or elderly people to cross the road. Oslo also has an air pollution problem – you could argue that cars are restricting the freedom of people with asthma who sometimes have to stay indoors when it gets too bad’, she said to the BBC in 2019.

It’s been a success: parking has been transformed into much-needed bike lanes, cycling is more accessible and the city centre is full of people. 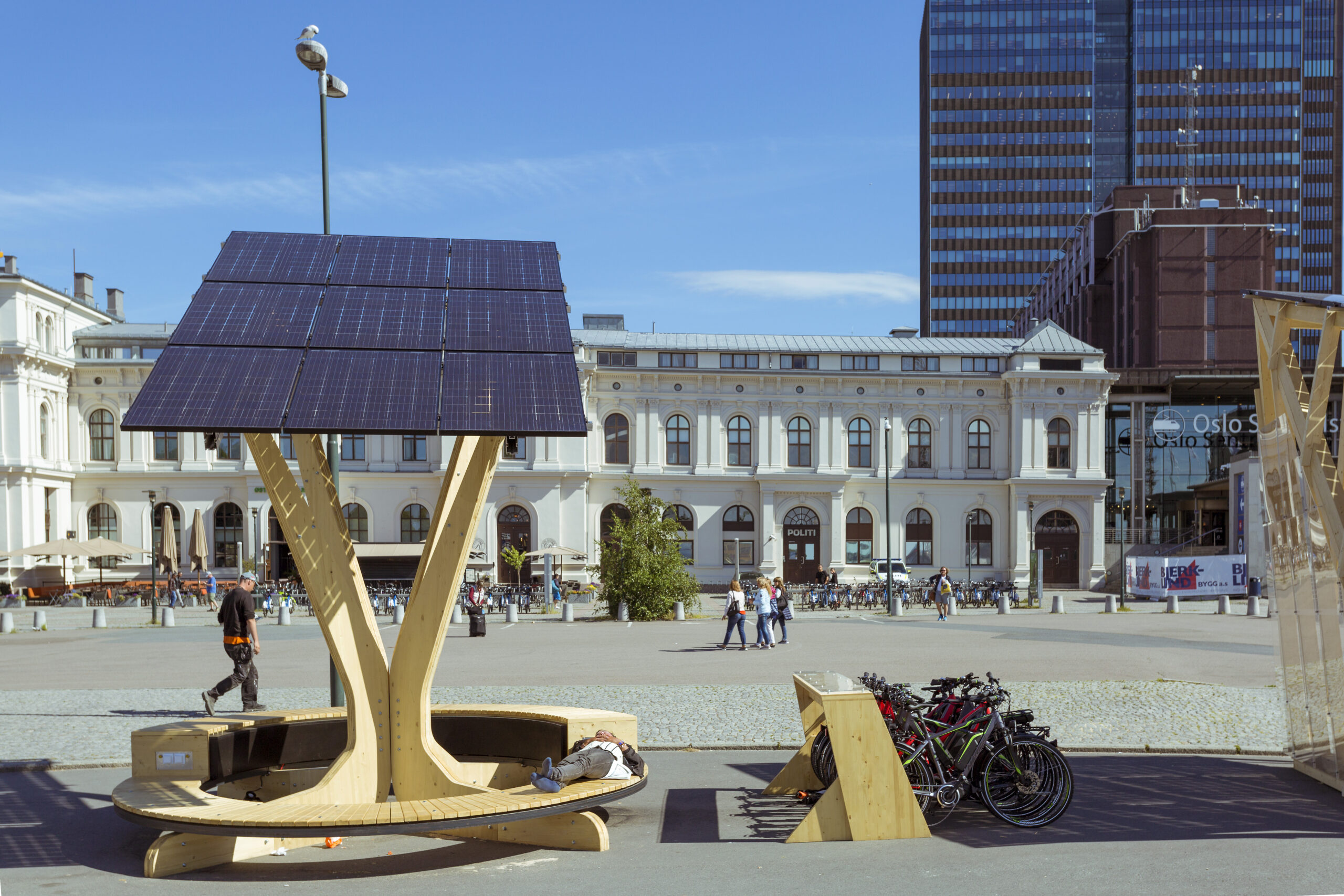 A city in Spain, Pontevedra, banned cars from its centre in the early 2000s. It went from having 14,000 cars pass through the city in a day – that’s more cars than people living there – to birds tweeting and conversations at normal volumes.

Traffic is restricted to outer areas where there are vast underground carparks, and people walk everywhere in town. While there’s traffic at busy times outside of the city, this has been completely eradicated in town.

Road deaths and CO2 emissions are drastically reduced, the city has gained more than 12,000 inhabitants and, as a result, small businesses were better able to weather the global financial crisis in the late 2000s. 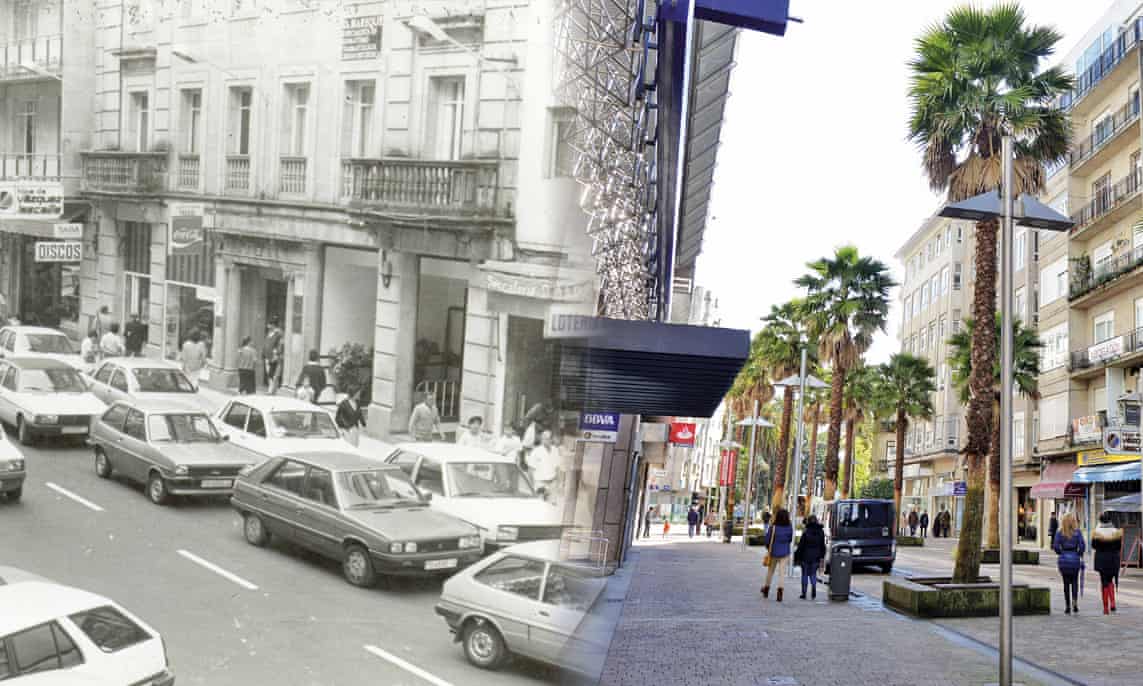 Calle Mellado in Pontevedra before and after the implementation of the scheme. (Photo: Concello de Pontevedra)

4. Joining up public transport and city-wide cycling in Bogota, Colombia

The capital of Colombia, Bogota, with a population 7 million, must be the cycle-centric public transportation capital of the Americas – if not the world.

Around 25 years ago, the former Mayor Enrique Peñalosa created a 300km network of wide protected bicycle lanes alongside pedestrian boulevards. This is now supported by the city’s rapid-transit bus network, which sees buses every 30 seconds at peak times. On-street parking removal and limiting 40% of cars during rush hour, based on number plates,  discourages car-driving.

Cycling and public transport are designed to work together. The bus transport network includes six massive park-and-ride style facilities for around 750 bicycles, and safe, traffic-free paths and ramps for cyclists.

Mayor Peñalosa explains the core value of citizen equality at the heart of the scheme, saying that ‘a protected bicycle path is a symbol that a citizen on a $30 bicycle is equally important as one in a $30,000 car’. 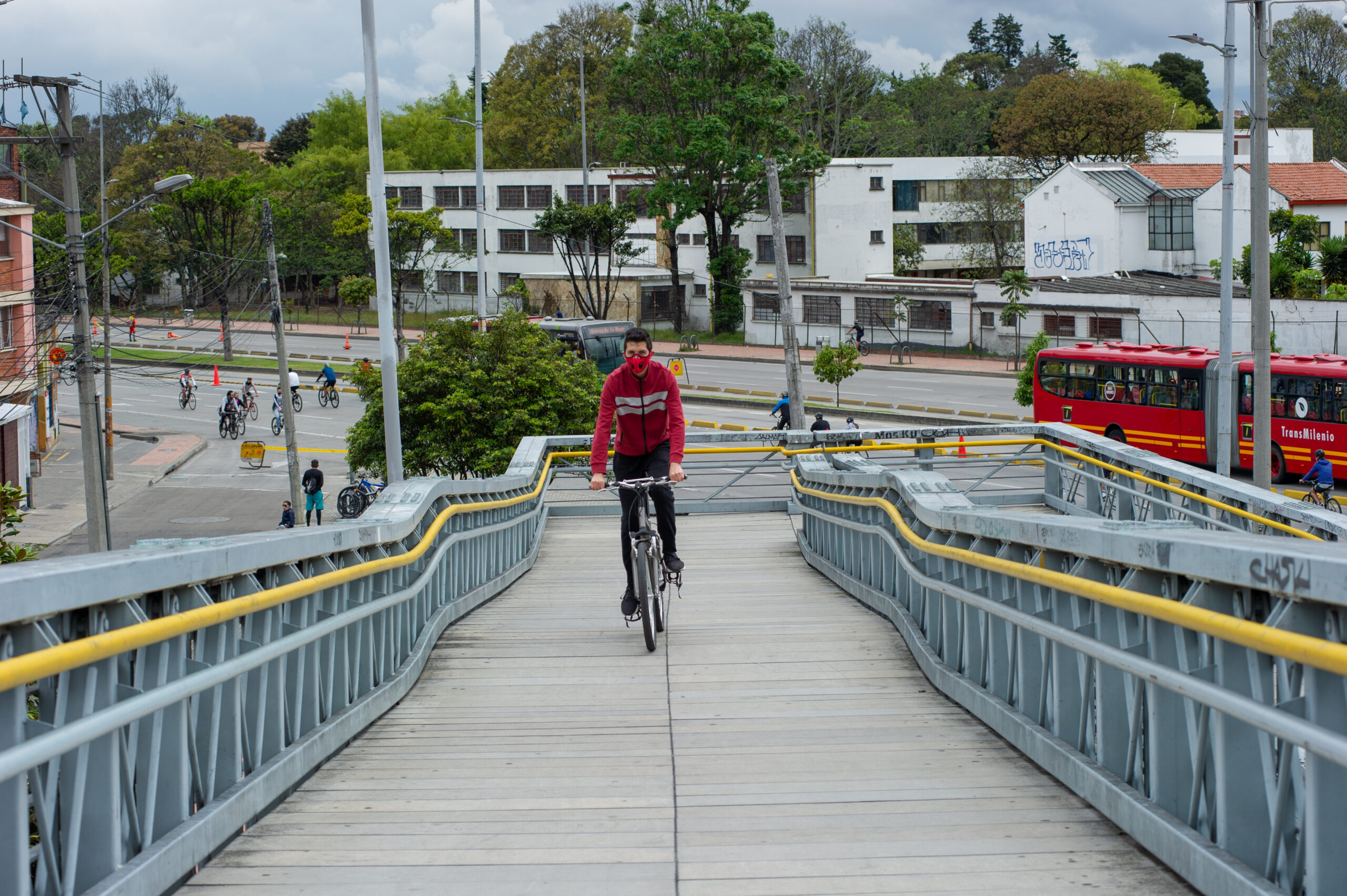 Jakarta is one of the most car and motor vehicle gridlocked cities in the world. But after a visit to Bogota in 2003, Jakarta’s governor got plans underway to build a 12.9km bus rapid transport (BRT) system through the heart of the Indonesian capital. Because a BRT is segregated, with barriers on either side, it’s far more reliable, convenient and faster than regular bus services. It was completed in just 9 months.

Following the opening of the BRT, passenger numbers went from 16 million in 2004 to 39 million in 2006. These impressive timescales and staggering numbers are a testament to the structure of the scheme. Most bus stations have elevated platforms for easy access from pavements connected by a bridge, for example, and buses run every 2–4 minutes from 5am to 10pm.

The inspiration taken from Bogota and a similar setup in Curitiba Brazil was clearly a powerful motivator for the government. And not only has it proven popular with Jakarta’s citizens – it’s thought to have reduced an estimated 120,000 tons CO2 annually from vehicles on city streets. 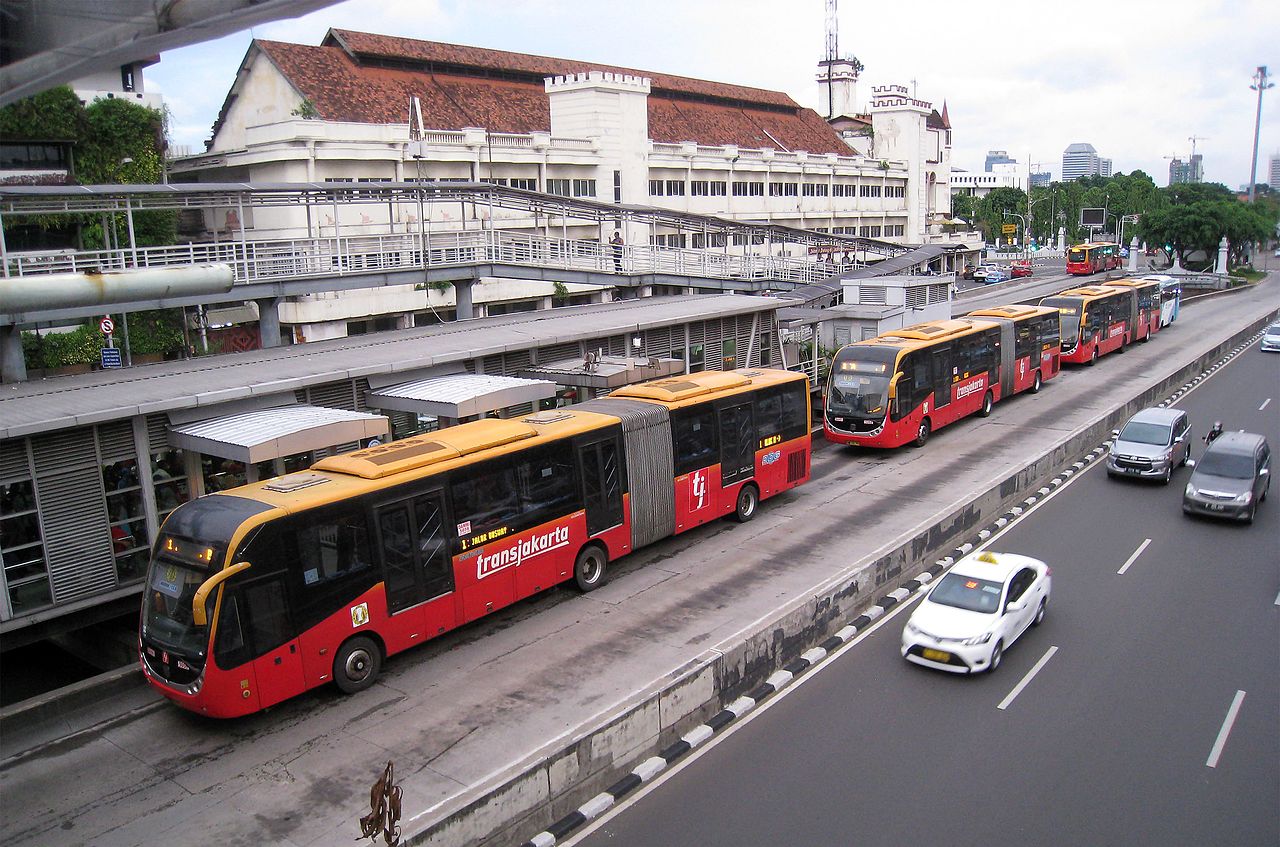 6. Pedestrians-first and plans for a ‘15-minute city’ in Paris, France

Thanks to mayor Anne Hidalgo, Paris pedestrianised the Right Bank of the Seine back in 2016. 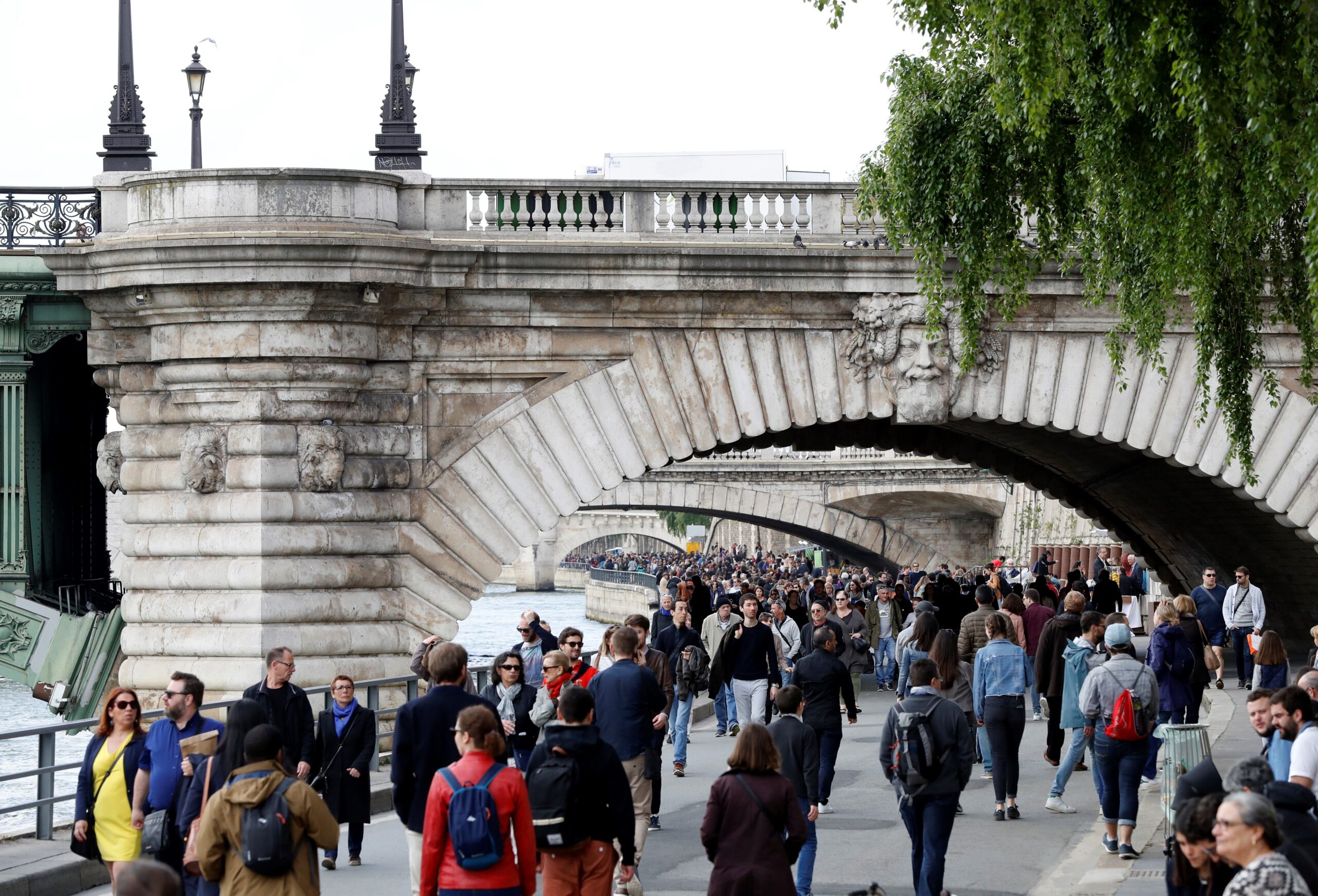 People walk on the right bank of the River Seine in Paris at the opening of the Seine Banks Park, which opened in 2017. (Photo: FRANCOIS GUILLOT/AFP via Getty Images)

What was once a loud and busy road is now a beautiful walking and cycling route with play equipment, public art, and green spaces all the way along it. And central shopping street, the Rue Rivoli, now has a very well-used bike lane:

Haven’t seen the amazing transformation of rue de Rivoli in Paris? Watch how many PEOPLE go by, in how many different ways. The cars are a bit delayed, but let’s be clear — they were MORE delayed before when there were more cars. Video HT @EmmanuelSPV pic.twitter.com/ma5CqqDAVR

This year, Hidalgo unveiled her plan to phase out polluting private vehicles completely and create what she calls a ‘15-minute city’ – in which Parisians will have what they need on their doorstep or nearby. Food shops, parks, cafes, sports and health centres and schools will be just a walk or bike ride away, with more support for working from home.

The plans are ambitious. They include a sweeping pedestrianisation programme, a €350m plan to ensure there’s a ‘bike lane in every street’ by 2024, and removal of parking spaces. Streets outside schools will be car-free, schools will be available for local residents to use during weekends and holidays, and the public will have a say in what the city spends a quarter of its budget on.

Planners in Barcelona are expanding their celebrated ‘superblocks’ – car-free islands within the city’s gridded streets spanning up to a dozen blocks. In these zones, pedestrians come first.

First introduced in 2016, Barcelona’s superblocks created more space for people. This was much-needed in a crowded city of few parks and other public spaces.

The expansion will create super-superblocks – with 21 streets in the Eixample district only accessible by motor vehicle to residents, essential services or deliveries. The squares created at crossings will be planted with trees – the most ambitious green remodelling of a city so far this century. 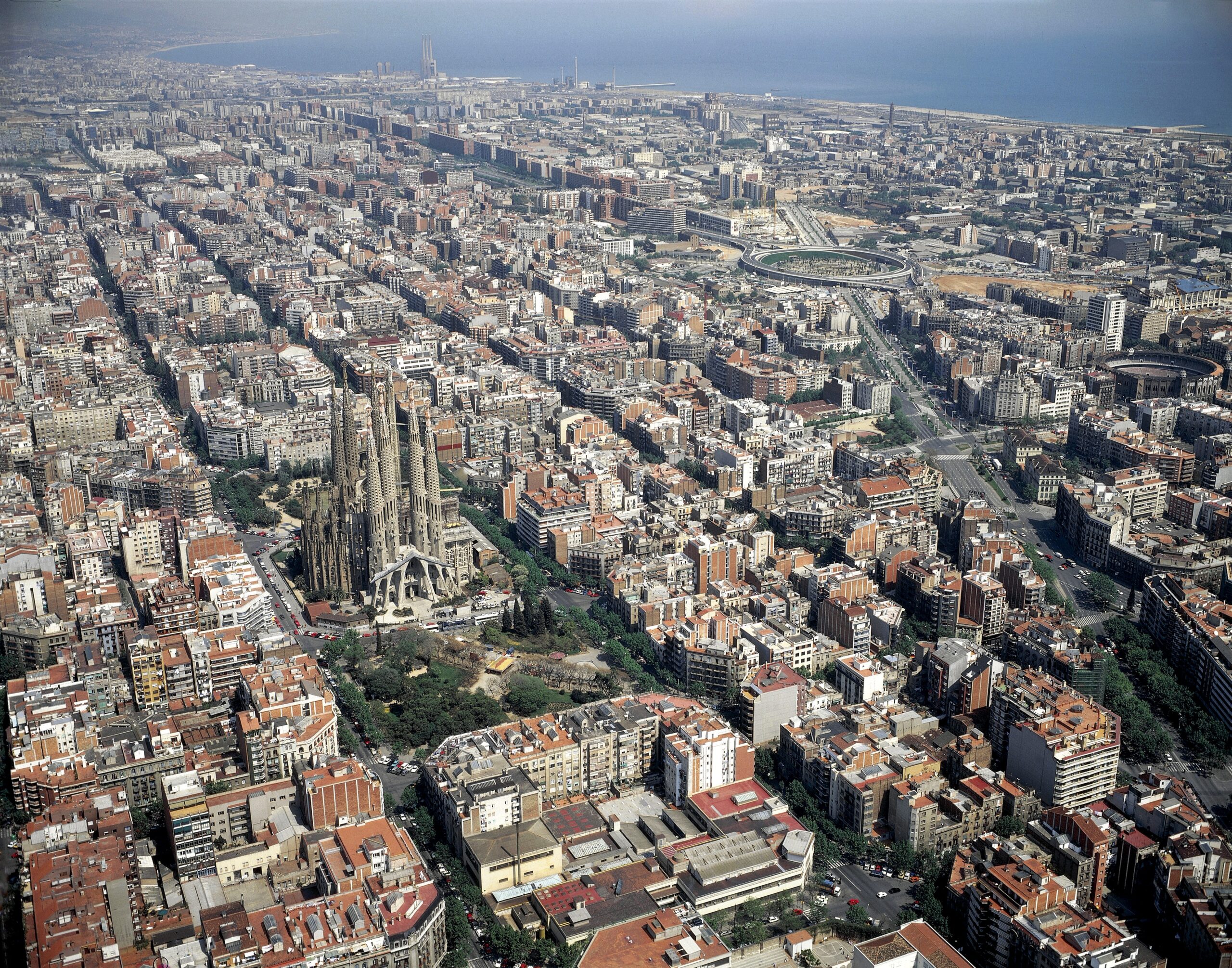 Aerial view of the end of the Eixample district of Barcelona marked by the Sagrada Família. (Photo: DeAgostini/Getty Images)

8. A railway line turned cycleway from Bristol to Bath, UK

One scheme that has changed the lives of cycle commuters, weekend walkers or wheelchair users living in and around Bristol and neighbouring city Bath is the Bristol to Bath cycle path.

The 13.9-mile path was created from a disused railway line between the two cities. It’s 97.6% traffic free and 99.7% asphalt, and wide enough for everyone along its length. It’s proven to be a popular commuting and leisure route for cyclists and walkers and an important wildlife corridor. It takes roughly two hours and twenty minutes to cycle, and four-and-a-half hours to walk.

Unusually for an off-road bike path of this length, it is fully accessible for wheelchairs and pushchairs. There are a variety level access points along the routes Bristol, and many of these have disabled car parking access too. 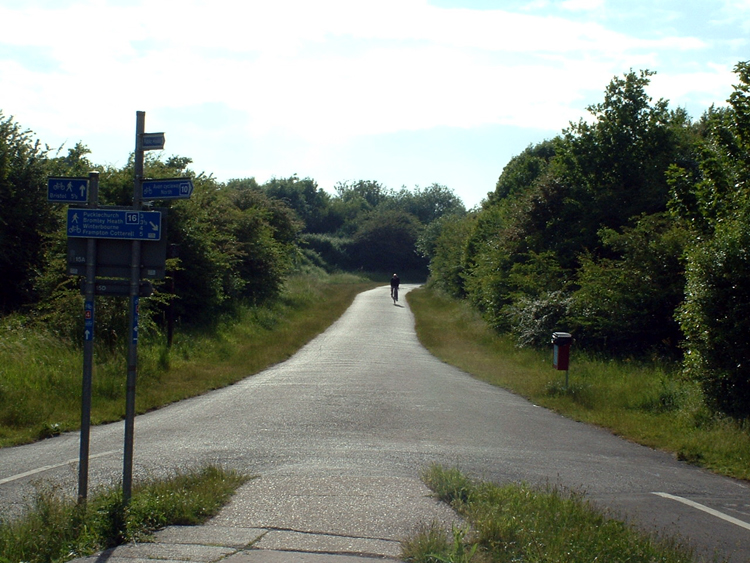 9. Reopening an old railway line in the Scottish borders, UK

Five years ago, the Borders Railway line from Ediburgh to Tweedbank was reopened after 40 years. No trains had stopped at the villages on the line since 1969 when the Beeching cuts closed thousands of local railways. This left many small towns and villages cut off entirely, reliant on car travel.

Now, residents of Stow, a village on the line, have been able to leave decades of car commuting behind. They say it’s re-energised the community – including through an increase in visiting walkers and cyclists to nearby countryside.

In just three years after its reopening, more than four million journeys were made on the line. And a campaign is currently working to extend the line to Carlisle, to give access to more visitors as the country recovers from pandemic measures. 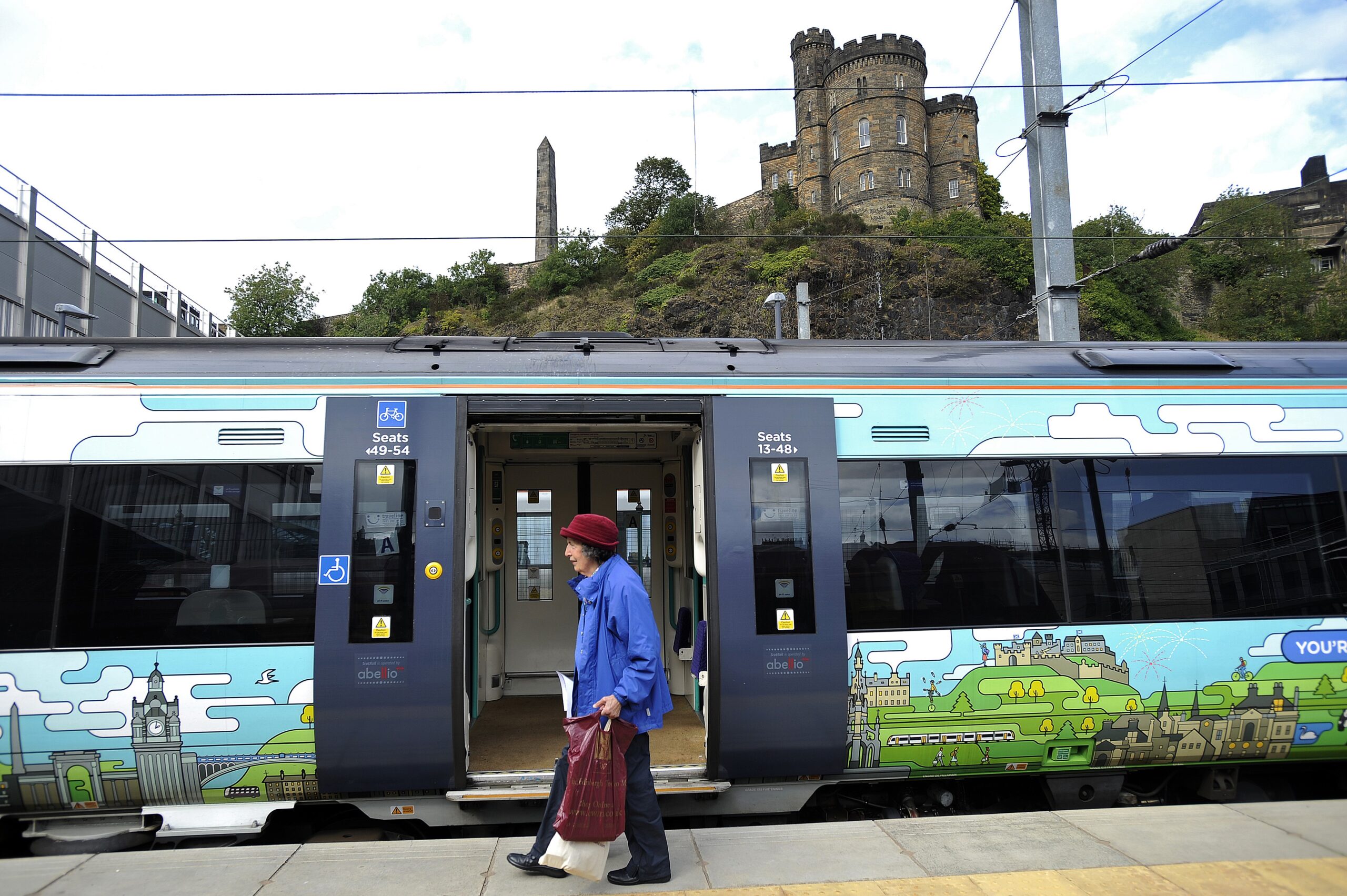 In late 2019, York councillors made an ambitious plan to limit the number of private car journeys allowed in York’s historic city centre within three years, in an effort to cut carbon emissions.

This means that non-essential private car journeys inside York’s city walls would be banned by 2023, with an exemption for people who rely on cars such as disabled residents.

The pandemic has already given many cities a taste of what drastically reduced car usage might look like, and York is no exception. In the first few weeks of the lockdown, the city recorded a 30% drop in nitrogen dioxide air pollution – a significant improvement in air quality. 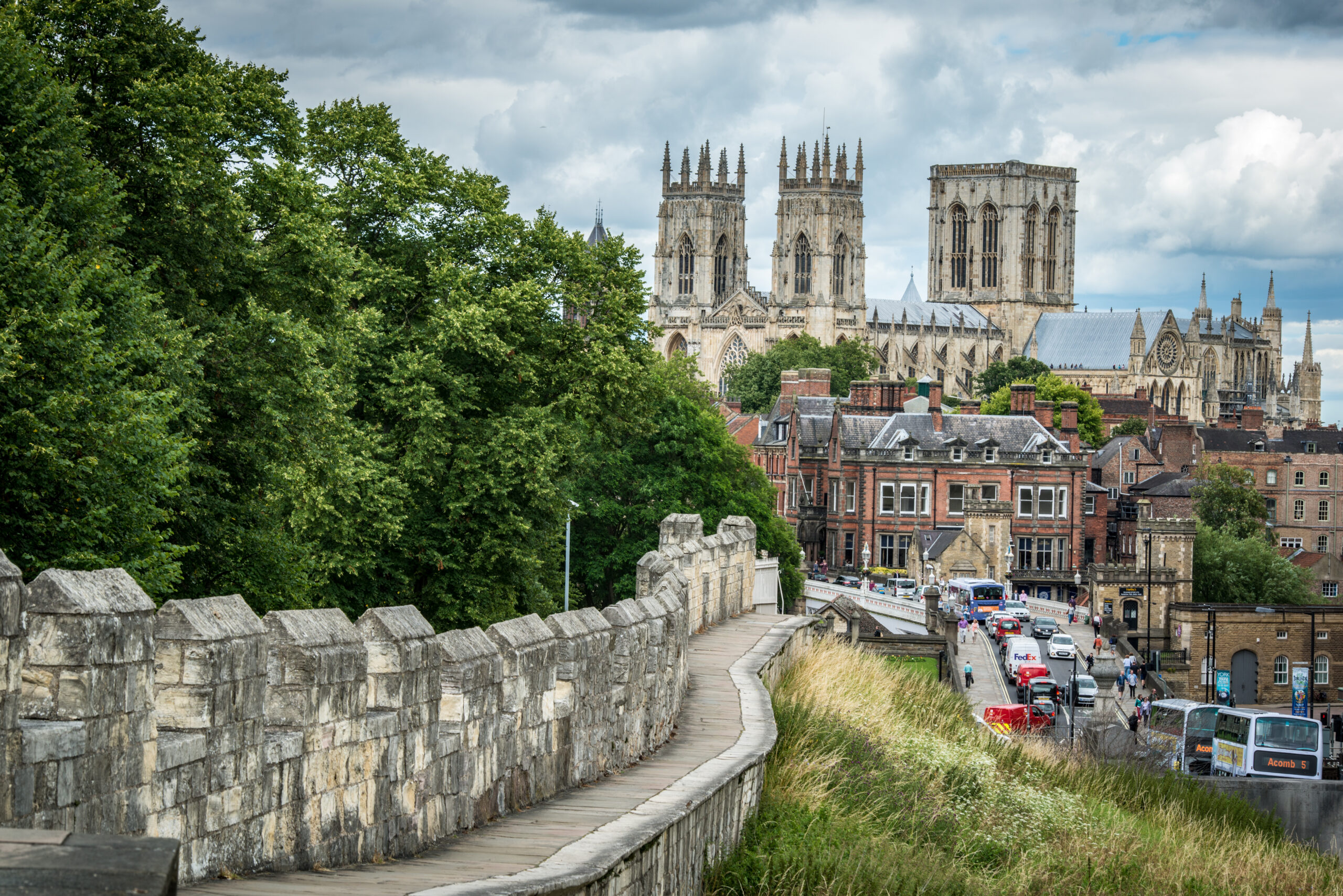 In Finland’s capital, getting the public around doesn’t just mean public transport. ‘Mobility’ is a public service which integrates public transport such as buses with cycle hire, and even ride-hailing services. These are then accessed and paid for in one simple app, called ‘Whim’.

Helsinki’s planners specifically designed the system to compete with private car ownership as a way to meet people’s mobility needs.

Users build their journey in the app, and can pay for them individually or through a monthly subscription. For €59.70 per month, the user gets unlimited public transport and bicycles as well as €10 in taxi travel. For €499 per month, Whim provides unlimited use of all types of transport. While the price is high – it’s competitive with the cost of running a car in Helsinki.