Plastic is everywhere. Useful and convenient, it’s also a massive pollution problem. Wildlife becomes ensnared in discarded plastic and microplastics are eaten by ocean creatures. Much of the UK’s plastic waste is dumped and burned overseas, affecting people's health. To stop this, we must produce less plastic in the first place.

Plastic is incredibly versatile and long-lasting, finding its way into every corner of our lives. But the very qualities that make plastic so useful also make it a huge problem. Cheap and disposable, plastic has been a symbol of our throwaway culture. As a result, vast quantities pollute our world. Much of it flows into the oceans, turning them into a plastic soup. A truckload of plastic enters the ocean every single minute and UK supermarkets produce 800,000 tonnes every year. With production increasing, that’s set to rise.

But plastic isn’t just a problem for wildlife. The UK produces more plastic waste per person than almost any other country, and a huge amount of it is sent abroad, most of it going to countries that aren’t equipped to handle it. Greenpeace investigators found British plastic waste being dumped and burned in Turkey – on the roadside, near waterways and in the open air, and people nearby have reported serious health problems. 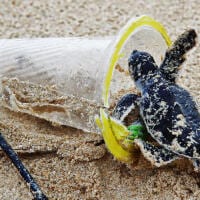 How does plastic get into the ocean?

How much plastic is in the ocean, and where does it come from? Here are the plastic pollution facts you need to understand what’s happening. 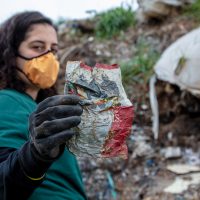 What really happens to my plastic recycling? 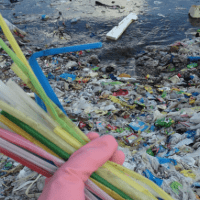 How can I use less plastic? 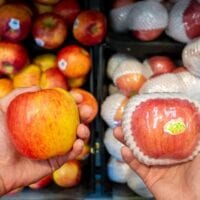 What's the solution to the plastic problem?

We’re all worried about the issue of plastic packaging – but what’s the real solution? It’s time to bust those plastic myths once and for all. 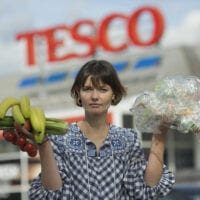 Which supermarkets are worst for plastic? 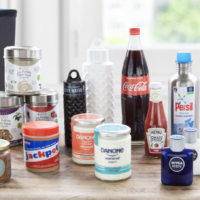 What are the alternatives to plastic packaging?

Greenpeace has released a plan showing how supermarkets can half their plastic packaging by 2025. Here’s what they need to do.

Bottles, pots and food trays are immediately obvious, but other types of plastic pollution can be harder to spot. When plastic breaks down it doesn’t disappear, it gets smaller, creating tiny particles called microplastics. Even clothes made from artificial materials shed microplastic fibres when they’re washed. Microbeads, another type of microplastic, are sometimes added to products such as cosmetics and toothpaste. Impossible to filter from waste water, they end up in our oceans.

Bits of plastic have been found in every corner of the world, including the deepest ocean trenches and on uninhabited islands. Our own researchers have found plastic pollution in Antarctica. Turtles, dolphins and seabirds can become entangled or injured by large pieces of plastic. It can even be mistaken for food. Microplastics are just as devastating. Swallowed by everything from microscopic zooplankton to giant blue whales, they enter the food chain and carry harmful toxins. Microplastics have even been found in human poo.

We’re just beginning to realise the scale of the problem, but fortunately the answer is simple: make and use less plastic. People around the world have come together to end plastic pollution, and it’s working. Greenpeace supporters have challenged Coca Cola to use less plastic, while countries like the UK have banned certain microplastics. Supermarkets are starting to talk about what they need to do.

But we need to go much further to end the flow of plastics into the ocean. Food and drink companies need to slash the amount of unnecessary plastic packaging they use. We also need to get rid of single-use plastics – like cutlery and glasses – once and for all.

Find out how your supermarket ranked in our plastic league table, and get tips on reducing plastic in your own life.