Plant-based food has hit the mainstream, with major fast food companies like Burger King and KFC releasing vegan versions of their beef or chicken classics. But is this the end of beefburgers and buckets of chicken? Or is it just hype?

Major fast food companies like Burger King, KFC and McDonald’s, and smaller cafes and high-street chains like Costa and Greggs, have been going vegan. Or have they?

Veganuary 2020 appeared to herald a new dawn in plant-based snacks on-the-go. Greggs released their steak bake (to much less of a media storm than its inaugural vegan pastry, the sausage roll in 2019). Outlets from KFC to Costa have offered up wholly plant-based options for customers to stick to their vegan month pledge.

Does this signal a long-term shift away from meat? It’s doubtful. KFC and Burger King still mainly serve chicken and beefburgers. And they are continually expanding. Globally, KFC opened eight new stores a day in 2018. Burger King’s parent company, Yum! Brands, plans to open up 14,000 new branches in the next decade – the last decade we have to do something about climate change.

Any plant-based menu item, while welcome as a step in the right direction, must be recognised for what it is: a tiny vegan token in a massive industry designed to sell huge quantities of meat.

Meat production will destroy our climate if it continues to grow

If the global meat industry continues to grow to meet the demand from fast food companies for beef and chicken, it will be a major factor preventing concrete action against climate change.

Crucial ecosystems like the Amazon rainforest and the Cerrado – the world’s most biodiverse savannah – are being burned and destroyed by cattle ranchers, or for soya plantations.

Soya is widely used for animal feed, and this is destroying these vital South American forests. With more fast food outlets selling more beef and chicken, yet more forests are destroyed to feed the animals that end up in boxes and buckets.

While a tiny step in the right direction, the addition of one or two vegan menu options won’t change the massive demand for meat in the fast food industry.

In July 2019, KFC admitted to representing around 4% of the UK chicken market, with combined annual sales across the UK, Germany, the Netherlands, Belgium and Sweden equivalent to 72 million chickens a year.

Ultimately the fast food business model, which centres around increasing sales of meat-based dishes, is incompatible with preventing the destruction of the world’s precious forests.

Ultimately, there does appear to be a bit of greenwashing, or even ‘veganwashing’, going on here. Like oil companies making a big deal on social media about researching how to make energy out of algae, while digging for climate-wrecking fossil fuels.

Maybe the companies are just offering a more modern option on a tired old menu. Or enabling vegans to have something to eat while their friends eat Whoppers or Zinger Burgers. And, just maybe, releasing them in Veganuary is a marketing ploy to capture a market of flexitarians who might not usually eat in those restaurants, but might be lured in while trying not to eat meat for a month. It’s hard to tell.

Finally, it does appear that these companies’ business models are putting the onus on customers to make changes to their diet. This is another classic move for corporations that sell climate-destroying products, and want to keep it that way. BP recently for example offered a personal carbon footprint calculator – one way to tell people to stop using oil before they’ll stop selling it.

It’s clear that these companies are just carrying on much as before because it’s hugely profitable, at the expense of a safe climate.

This is not an exaggeration: the Amazon and other forests – which store carbon and can therefore keep the climate stable – are being slashed and burned and replaced with cattle farms and soya plantations to produce meat. This brutal system is accelerating climate change, harming Indigenous Peoples and destroying our natural world.

Some of the UK’s biggest supermarkets and fast food chains are complicit: Tesco, Sainsbury’s, Asda, Burger King, McDonald’s and KFC are all churning out industrial meat that’s fuelling deforestation.

Sign the petition below to take action for our planet’s precious forests and the people who depend on them.

Tesco “Stop buying from companies owned by JBS - the biggest industrial meat producer in the world, and one of the biggest drivers of Amazon destruction. Replace half the meat you sell with plant-based food by 2025.” 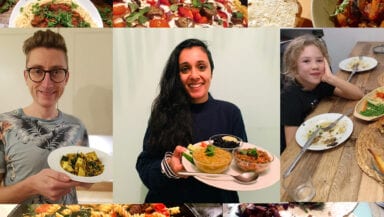 We love food, and we love our planet – we shouldn’t have to choose one or the other! Try out some tasty plant-based dishes for Veganuary that are healthier for us and our planet too.