Police Scotland are beginning attempts to remove Greenpeace activists occupying a BP oil rig in Cromarty, Scotland. A police helicopter is above the site

On the 5th day of the standoff between Greenpeace and BP, rig workers have informed the activist that the rig will be lowered 20 metres into the sea to allow the police access by boat. One Greenpeace activist is now in a portaledge attached to the anchor chain in an attempt to thwart the removal efforts.

The move comes following an injunction issued to Greenpeace in response to the occupation. The oil rig was due to head to Vorlich field on Sunday where BP hopes to access 30 million barrels of oil.

Greenpeace is demanding that BP immediately end drilling new wells and switch to only investing in renewable energy. If BP does not do that, Greenpeace say, it should wind down its operations, return cash to investors and go out of business.

“We are determined to resist removal as long as BP remains determined to drill for oil. BP’s plans are completely and unacceptably at odds with the climate emergency we are facing. If they put half as much effort into investing in renewables as they appear to be putting into removing us from their rig, the world would be looking like a much better place right now.”

If you plan to go up to the site, please let us know and we will help you coordinate speaking directly with our spokesperson.

If you would like to stop receiving emails from this sender, simply unsubscribe. 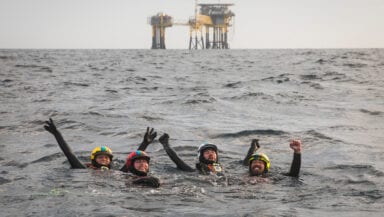 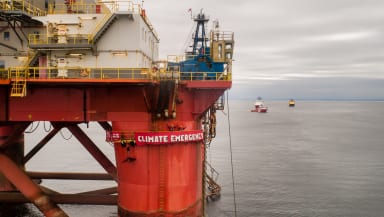