REVEALED – Tonnes of shark fins exported from Britain every year

The majority of sharks in European and UK waters are being caught by Spanish vessels. Sharks are being landed in the UK, and their fins are then sent to Spain, one of the world’s biggest shark fin exporters. From there they’re sold on to meet demand, largely in certain Asian countries, where shark fin soup is considered a delicacy.

EU rules state sharks can only have their fins removed once they have been landed. However, it is not illegal to buy or sell certain types of shark fin in the UK, so long as traders adhere to regulations.

“Many people will be gobsmacked to hear that Britain is fuelling a controversial global trade threatening a majestic predator that’s vital to life in our oceans,” said Will McCallum, head of oceans at Greenpeace UK. “With tens of millions of sharks being killed every year, the UK government should do all it can to protect these creatures, starting with a ban on shark fin exports.”

He added: “We are campaigning for limits on shark fishing and also at the UN for a strong Global Ocean Treaty which will help shark populations recover from decades of overfishing and provide greater protection for marine life in our seas”.

Graham Buckingham from shark conservation organisation ‘Bite Back’ told Unearthed: “The sheer volume of shark fins being exported by the UK is a shocking indication that global demand for shark fin soup remains high and that sharks from EU waters are paying the price. When you consider that Spain, France, Portugal and Britain feature in the top 25 shark fishing nations in the world it’s clear that European fishing fleets are making the most of the fact that there are still no catch limits for blue, mako and tope sharks.”

The Unearthed investigation comes three months after dozens of dead sharks with their fins cut off washed up on a beach in Wales. In June, Greenpeace launched a new report,  ‘Sharks Under Attack‘ which reveals how a lack of protection in international waters is resulting in the deaths of tens of thousands of endangered sharks each year.  The report highlights the devastating impact that overfishing is having on shortfin mako shark populations, the world’s fastest shark, which is closely related to the great white. Greenpeace’s analysis shows that Spanish and Portuguese ships in the north Atlantic area are catching as many as 25,000 mako sharks annually

“Its unacceptable that while the future of more than a quarter of shark populations hangs in the balance, it remains legal to buy or sell shark fin in the UK. Sharks are vital to the health of marine ecosystems. Maintaining populations of shark and other fish species at the top of the food chain is critical to keeping the right balance of marine life in our oceans”, said Will McCallum.

Sharks are also known to play an important role in mitigating climate change. Researchers at Bournemouth University found in 2016 that poor management of the oceans, specifically through overfishing and practices like shark finning, could have negative consequences for the global climate, allowing shark prey to proliferate which in turn generates increased CO2 levels. Ends. 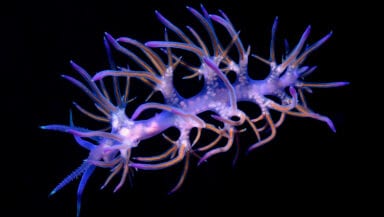 Sea slug or Christmas decoration: can you tell the difference?

Only a true sea slug master will score more than 80% on this festive quiz.