Unearthed investigation shows that a minority of wealthy families control huge swathes of fishing rights to the detriment of local, low-impact, fishermen

A landmark investigation into the UK’s fishing sector has, for the first time, mapped out the beneficial ownership and distribution of fishing quota across the entire UK (including Scotland, the largest area by quota).

The study, by Unearthed, Greenpeace’s investigative unit, reveals a vastly unequal and mismanaged system, where a tiny minority of wealthy families control huge swathes of fishing rights to the detriment of local, low-impact, fishermen.

“This stunning sell-off of British waters by our own Government is a national disgrace and an economic, social and environmental tragedy,” said Will McCallum, head of oceans at Greenpeace UK. “Successive governments have presided over a monumental mismanagement of this precious public resource – destroying the livelihoods of local, inshore, fishermen, eroding coastal communities and encouraging unsustainable fishing, while allowing a wealthy cabal of fishing barons to become the UK’s Codfathers. How long before the Government stops blaming other countries, looks at its own broken system, accepts responsibility for fixing it and creates a fairer and more sustainable distribution of fishing quota across the UK? With the Fisheries Bill rumoured to be just weeks away, there has never been a better opportunity to do just this.”

Scotland (the UK’s largest fishing nation, with two-thirds of all quota):

England (the UK’s second-largest fishing nation, with 24% of all quota):

Northern Ireland (the UK’s third-largest fishing nation, with 9% of all quota):

Will McCallum, head of oceans at Greenpeace UK, said:

“Many of these companies were amongst those touting the opportunity to ‘take back control’ of our waters by leaving the EU. They’re taking politicians and regular fishermen for a ride, because they know exactly who’s in control. And the same politicians who slammed Europe for breaking Britain’s fishing sector are the ones restricting the majority of fishing quota to this handful of wealthy families. It’s a betrayal of Britain’s fishermen.

“When Greenpeace took the Government to court in 2015, they had the gall to say that the UK’s fishing industry was all in order. They were slammed by a European Court for claiming fishing quota was distributed in a transparent and objective way.

“With the odds stacked against them, is it any wonder that fishermen across the UK have been run out of business, or that coastal economies have collapsed and the communities that they support have been hollowed out? If the Government cares about coastal communities they need to use the Fisheries Bill to reduce the power of these Codfathers. We need a fair distribution of fishing quota to local, low-impact, fishers to boost coastal economies, reduce the environmental impact and help rebuild fading seaside towns.”

Fishing is a devolved issue as Westminster has delegated fisheries management, including quota allocation, to the devolved administrations.

Unearthed’s investigation used Companies House records to trace the beneficial ownership of all significant quota holdings listed on the UK Government’s FQA (Fixed Quota Allocation) Register at April 20, 2018, mapping for the first time the distribution of the entirety of the UK’s fishing quota, including fishing rights in England, Wales, Northern Ireland, and the largest fishing nation, Scotland. Unearthed ranked owners by the proportion of total FQAs that they held. An FQA entitles the holder to land a share of the UK’s “Total Allowable Catch” of a particular quota stock. The actual amount of fish that can be caught against a particular quota holding will vary from year to year. Unearthed classed quota holdings as “owned or controlled” by a parent company where they were held directly by that company, or held by a company/vessel partnership in which the parent had a stake of more than 50%.

The full investigation will be published on Thursday 11 October. Data for the investigation is available on request: luke.massey@greenpeace.org.

For general photo and video of the UK fishing industry, see:

For the full data, information, comments and interview requests, contact: 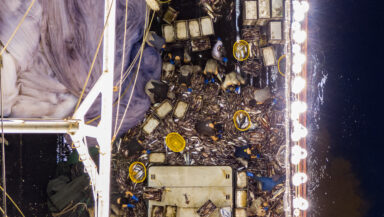 How squid fishing is harming our oceans

Behind that forkful of squid, there’s an entire industry that capitalises on a lack of fishing regulations in international waters. This industry poses a huge threat to marine life and affects coastal communities worldwide, so find out why squid matter for the future of our oceans.