Artist Fiona Banner: ‘Why I delivered a 1.25 ton boulder sculpture to the government’

This week Greenpeace activists and I dropped a 1.25 ton Full Stop sculpture onto the doorstep of the Department of Environment, Farming and Rural Affairs (Defra) in support of Greenpeace’s Dogger Bank boulder barrier.

It is called Klang, from the font of the same name, and it’s a bit of a klanger.

On Monday morning, it was blocking the entrance of the Home Office where Defra is housed; a message to the Environment Secretary George Eustice, calling out his failure to protect our ocean environment.

We are fed up with the puffed up rhetoric of this government. This is to remind them that when words become meaningless, democracy dies.

“Full Stop shows the disjunction between what a Marine Protected Area stands for and the reality of what is happening in those areas.”

It is one of a series of three full stops, an ellipsis…

The other two, called Peanuts and Orator (also fonts), were loaded onto the Greenpeace ship the Esperanza this afternoon and deployed as an installation in the sea in the Dogger Bank Marine Protected Area, which is not being properly protected.

It’s the finale of the incredible Greenpeace action that has been going on in that area over the last weeks. 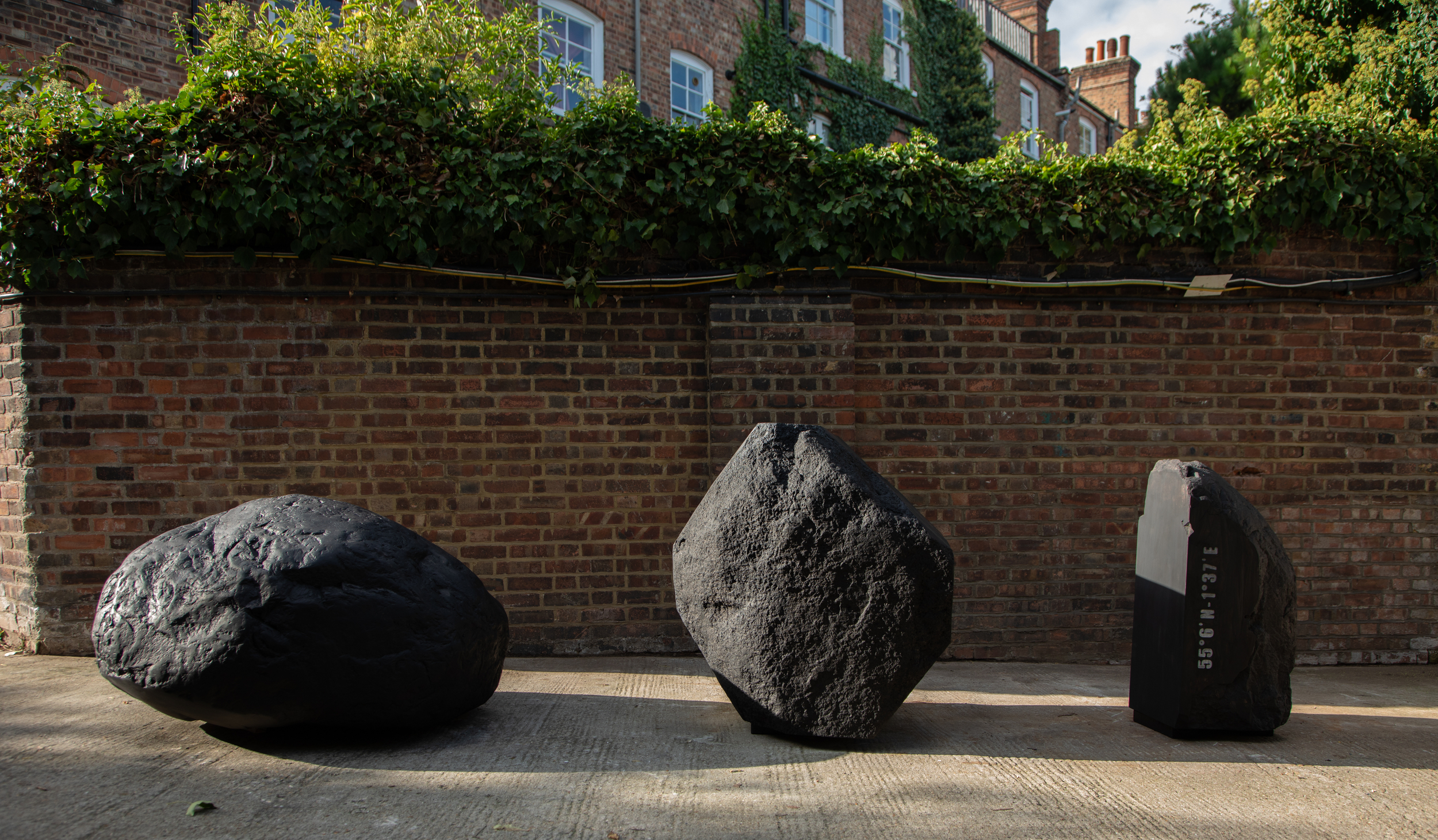 They are sculpted from granite, similar to that which was glacially deposited in the Dogger Bank – the stretch of land which once connected Britain to continental Europe thousands of years ago.

Peanuts and Orator will be left on the seabed. They will become part of an underwater barrier that obstructs big industry bottom trawler activity in this straight. 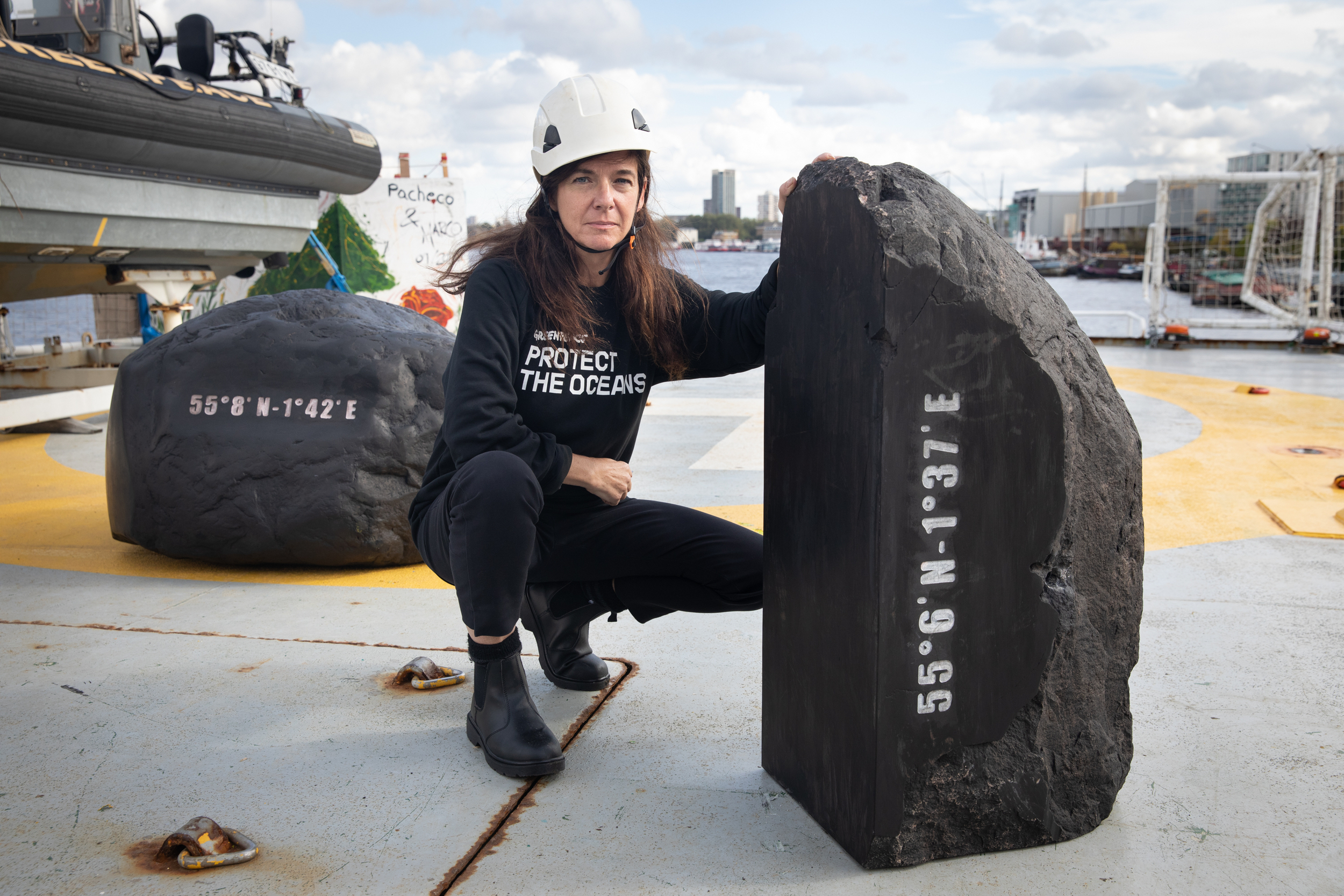 Artist Fiona Banner aka The Vanity Press poses with her sculptures “Peanuts Full Stop” (left) and “Orator Full Stop” while aboard the Greenpeace ship Esperanza, at Tower Bridge in London. © Suzanne Plunkett / Greenpeace

Taking the idea of language and fonts as couriers or messengers of information, the full stops speak of an impasse in language.

Here, they are becoming physical impasses, obstructions, but at the same time making a stand for the need to engage with each other and through action – and a need for ‘us’ to engage with nature.

Granite is an incredibly hard, mighty stone, formed over eons. Whilst trying to shape it, it became clear it was resisting human intervention – nature is strong but fragile, it cannot bend to our will.

Language is the medium of treaties, argument, debate and agreement. The Full Stop sculptures are symbols of language on the precipice – massively blown-up, made physical and confrontational.

The Full Stops symbolise an impasse and crisis in language, highlighting the slipperiness of communication in a time of polarised rhetoric during which the term ‘post truth’ has become common vernacular.

Full Stop shows the disjunction between what a Marine Protected Area stands for and the reality of what is happening in those areas. The work represents a rupture and demands a new approach.

The pandemic has made us more alert to our vulnerability and the precariousness of nature and our ecology. I am deploying these sculptures as agents for change – a call to the government to stop, reconsider and take action. It’s time to take a breath and redraw the lines. Surely the seabed is the bottom line! 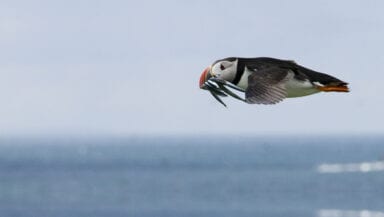 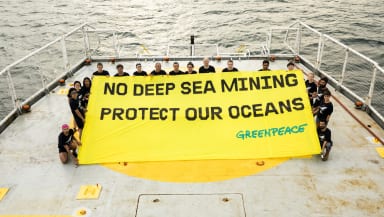 Activists on the Greenpeace ship Rainbow Warrior have taken the first ever action at sea against companies preparing to mine the Pacific Ocean’s seabed.

Mauritian scientist and climate advocate, Shaama Sandooyea, has held the world's first ever underwater climate strike at the heart of the Indian Ocean. The protest took place at the Saya de Malha Bank, a climate-critical site owing to its vast seagrass meadows, 735km off the coast of Seychelles.