What comes to mind when you imagine a Marine Protected Area?

Whatever you’re thinking, I bet it’s not this.

The giant supertrawler ‘Margiris’ fishing in the English Channel

Supertrawlers don’t belong in protected waters. Sign the petition to ban supertrawlers from the UK’s Marine Protected Areas, then read on to learn more.

How do Marine Protected Areas work?

The UK established its UK network of MPAs to protect important habitats like reefs and sandbanks, and protect iconic species like porpoises and dolphins.

On paper, the network seems pretty good – it covers 25% of the UK’s waters. However, the reality tells a very different story. A Greenpeace investigation has found that industrial supertrawlers spent thousands of hours fishing in these “protected” areas in 2019.

Supertrawlers are fishing ships over 100m in length that catch fish by dragging giant nets behind them. These nets can be a mile long, and can catch hundreds of tonnes of fish every day.

Supertrawlers aren’t the only kind of industrial fishing boat operating in UK waters. But because they’re spending so much time fishing in MPAs, and because they fish on such a large scale, they threaten the most important ocean habitats. This kind of intensive fishing in protected waters simply isn’t compatible with a healthy ocean.

What are supertrawlers doing in Marine Protected Areas?

The Greenpeace investigation found that industrial supertrawlers spent 2963 hours fishing in Marine Protected Areas in 2019 alone. That’s the equivalent to 123 days, or more than a quarter of the year.

The 39 UK MPAs affected by supertrawlers in 2019 are all in the UK’s ‘offshore waters’ – more than 12 nautical miles from the shore. They fished especially heavily in the Southern North Sea MPA, off the east coast of England. The government created this MPA to safeguard porpoises – a species that’s particularly threatened by supertrawlers.

The intensity and scale of supertrawler fishing is a real threat to the habitats within MPAs. These industrial vessels stay at sea for weeks on end, catching, processing and freezing hundreds of tonnes of fish every single day. Ocean life is deeply interconnected, so when vast numbers of fish suddenly vanish from one part of the ecosystem, it’ll inevitably have serious impacts on everything else.

Supertrawler-size ships also carry a massive extra risk if anything goes wrong. There’s simply no margin for error when you’re working with mile-long nets that can cause serious damage if they’re not used correctly. Even without the direct impacts from fishing, supertrawlers put these vulnerable habitats at risk every time they enter an MPA.

Currently, it’s completely legal for them to do all of this, which makes a mockery of the idea of a Marine Protected Area.

Why are supertrawlers allowed to fish in MPAs?

It’s simple: when the government created these MPAs, they couldn’t make the rules strong enough. That’s because EU law limits the ways countries can regulate their coastal waters. As a result, the UK’s MPAs don’t properly protect the sea life inside them, which really defeats the point.

Luckily, there’s now a chance to fix this.

What needs to change?

The government needs to properly protect our Marine Protected Areas, and that starts with banning supertrawlers from fishing in them.

If they do this, they’ll have plenty of support. 57 MPs (from all parties) have already signed an open letter calling for a ban, and over 200,000 people have joined the Greenpeace campaign. Meanwhile recent YouGov poll shows that four in five people, across the political spectrum, want supertrawlers banned from MPAs.

The government has done some good things on ocean protection internationally. And although Brexit puts our environment at risk in other ways, leaving the EU allows us to strengthen protections for our MPAs. This will leave the government no excuse for letting supertrawlers fish in protected waters. As the Brexit negotiations continue, let’s make sure they do the right thing.

Our Marine Protected Areas should be properly protecting ocean life. And that means supertrawlers simply can’t be allowed inside them. Sign the petition below to ban supertrawlers from protected waters.

Tell the government: ban supertrawlers and other destructive fishing from the UK’s offshore Marine Protected Areas, and stand up for ocean protection. 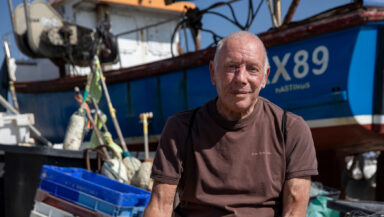