The UK might be a small country, but as the birthplace of the industrial revolution, we’ve always played an outsized role in the story of climate change. This year the UK is playing a bigger part than ever, as we’re hosting the COP26 global climate talks in Glasgow.

The government says it wants all countries to raise their carbon cutting ambition. But those words won’t carry much weight unless we’ve got our own house in order. So Greenpeace has checked how the government’s climate programme measures up, and how they can do better.

This scorecard rates the domestic and international action promised or taken by the government, in four areas:

In each of the four areas, we’ve looked at what kinds of promises the government made; what they’ve actually done and if there’s been any delays; and what they need to do this year before the UK can call itself a climate leader.

Each of these things is key to tackling the climate crisis, so by looking at them we can cut through the rhetoric and rate the UK’s real progress. Sadly, the verdict isn’t good: 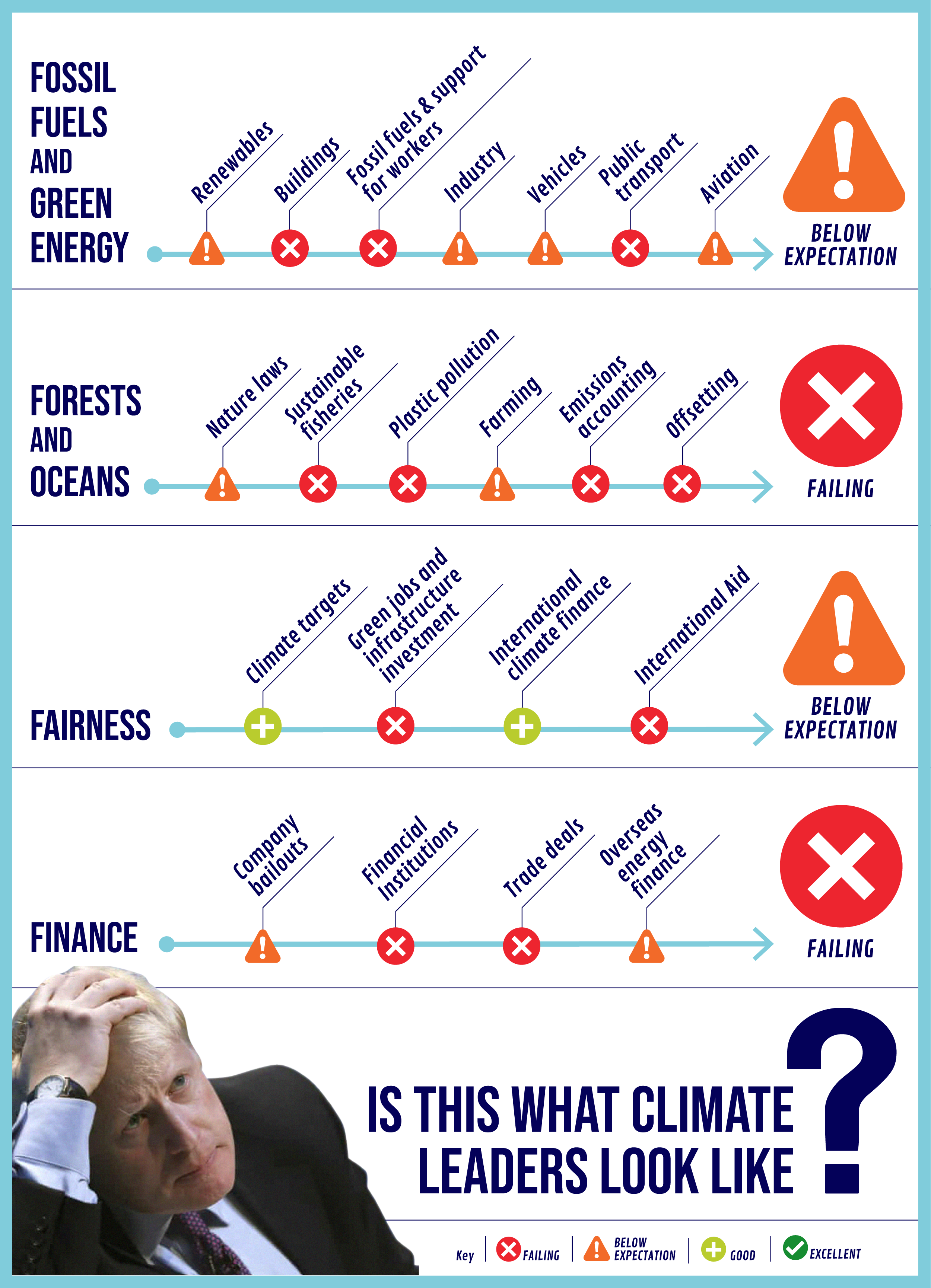 Looking for more detail? Here’s a full breakdown that explains the final scores.

How the UK can do better on climate change

Boris Johnson’s scorecard shows how badly the UK is falling short on climate change – despite the government saying over and over again how good they are.

But this isn’t about bashing the government for the sake of it. It’s about showing where they can do better on something that both politicians and the public think should be a priority.

Given we are still in a pandemic, it can be tempting to let the government off the hook for not being up to speed on climate. But climate change is a crisis that will dwarf coronavirus – with unimaginable effects for everyone on Earth – especially if strong and decisive action isn’t taken now.

So while the government currently talks a good talk about climate action, we need them to start walking the walk. So what would a high-scoring climate programme look like for the UK?

Climate change is already impacting millions of lives, including in the UK. But the incredible scientific success of the vaccine shows that the UK can lead the world in innovation, even in a crisis. We have the solutions. Now the governments of the world must implement them.

Coronavirus has knocked many plans off course. But the government is claiming to be a world leader on climate change, and we should hold them to their word.

Why climate action in the UK matters now, more than ever

This year, the UK is hosting a crucial round of international climate negotiations known as COP26.

In November, world leaders and top government officials from every country will gather in Glasgow to agree the world’s next steps on climate action. This year’s talks are particularly important, because countries are due to present their ‘Nationally Determined Contributions’ – essentially outlining the part they’ll play in the global fight against climate change.

Hosting these talks is a huge responsibility, and it gives the UK much more influence on other countries’ climate commitments than it’d ever have normally. That means for the next few months, climate action here can help unlock climate action everywhere.

“For the next few months, we can push things forward with the power of our example. Climate action in the UK can help unlock climate action everywhere. ”

But to make the most of this opportunity, we need to be able to prove that we mean what we say. By showing the world a really solid climate change programme, we can push things forward with the power of our example.

The UK is a very rich country by global standards, with great technological and industrial know-how. If we aren’t able to show that we have plans in place to reduce emissions, this would send a disappointing message to the rest of the world and fail to inspire action.

Only by getting the UK’s house in order can the government credibly ask other countries to commit to reducing their carbon emissions at COP in Glasgow this year. Boris Johnson needs to know that his government’s performance on crucial climate issues this year will reverberate through history.

How do we step up to the challenge we’ve been given?

The UK government is far from setting a good example right now – but we still have an opportunity to change course. We know the government responds to public pressure on issues – if we make enough noise (eg: the u-turn on free school meals). And we know that Boris Johnson wants these summits to be seen as a success.

If we apply enough pressure, we can hold the government to account over its promises. And force them to match their words with action.

Join us as we demand Boris Johnson takes real action on climate change – action on fossil fuels, action on the banks and investors funding climate-wrecking industries, real protection for our forests and oceans, and increased funds to support climate action in other countries, particularly those bearing the brunt of the crisis.

Add your name to our petition to the Prime Minister.