Climate debate: how party manifestos measure up on climate change and nature

The next government will be in power during a crucial time when the climate and nature emergencies need to be tackled head-on. Greenpeace policy experts have ranked the party manifestos on climate change and nature commitments to reveal how serious they are ahead of the first-ever TV debate focused on climate.

The 2019 general election is the first in which climate change is a big issue. With demonstrations by Extinction Rebellion and the youth climate strikers making global headlines, politicians have been forced to accept that climate change is not a fringe issue or something that can be ignored.

The majority of voters have said climate change will influence how they vote. And over two-thirds want the government to deliver stronger climate measures, and faster than is the case right now. And millions of people have demanded that party leaders take part in a TV debate on climate change. So there are many reasons why climate and nature need to be at the front of this election.

Parties competing for seats in Westminster should be putting these issues at the heart of their pitches to voters. There’s certainly been a lot of noise.

But how can you know for sure what the parties are promising to do?

To help you decide where to place your vote, Greenpeace policy experts have analysed the manifestos and other relevant commitments published by the main parties. Each party has been graded on how well its promises match up to key things that need to be done in four really important areas. Whatever happens with Brexit, these have to be a priority to tackle the twin threats of the climate crisis and the breakdown of nature. 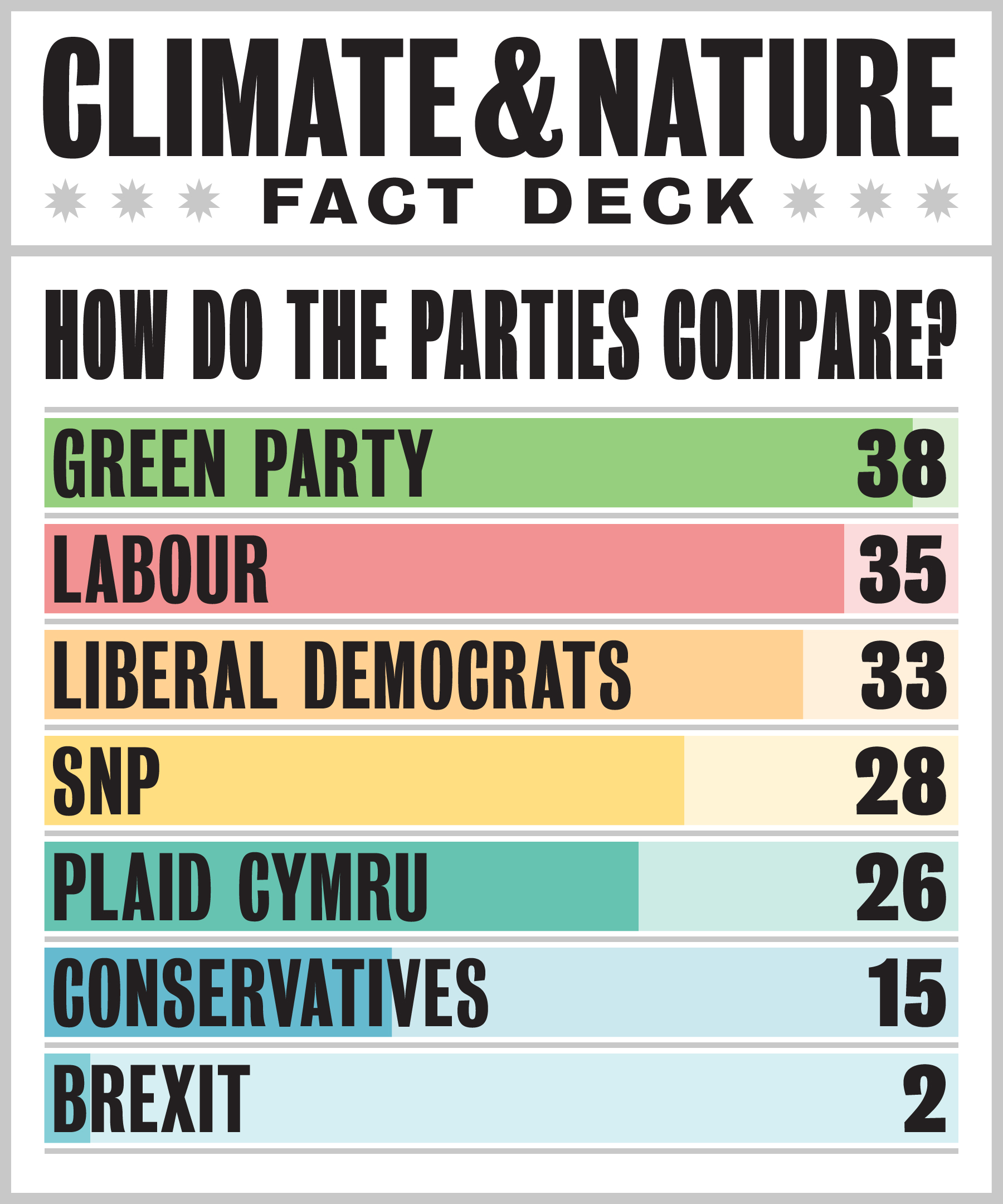 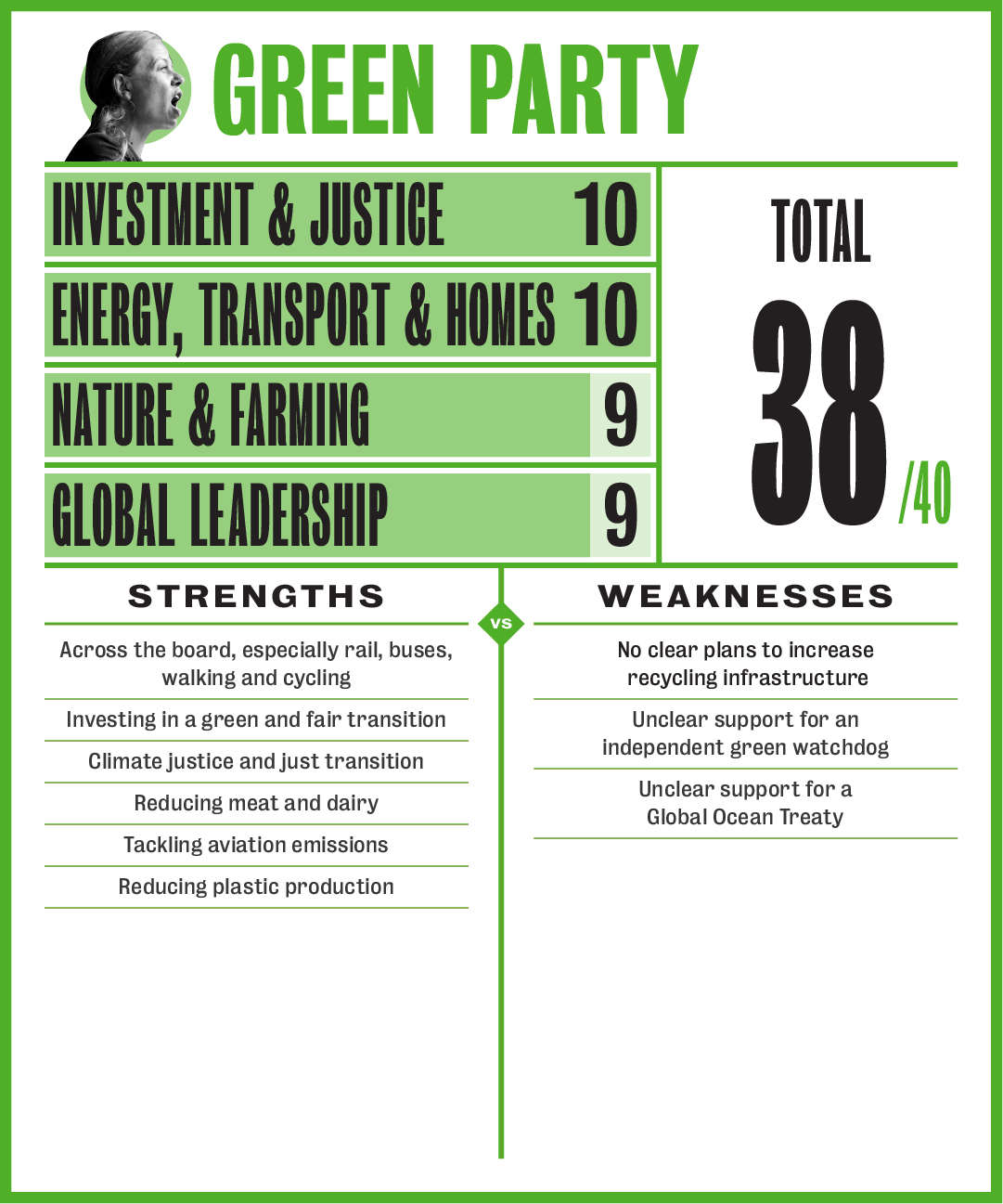 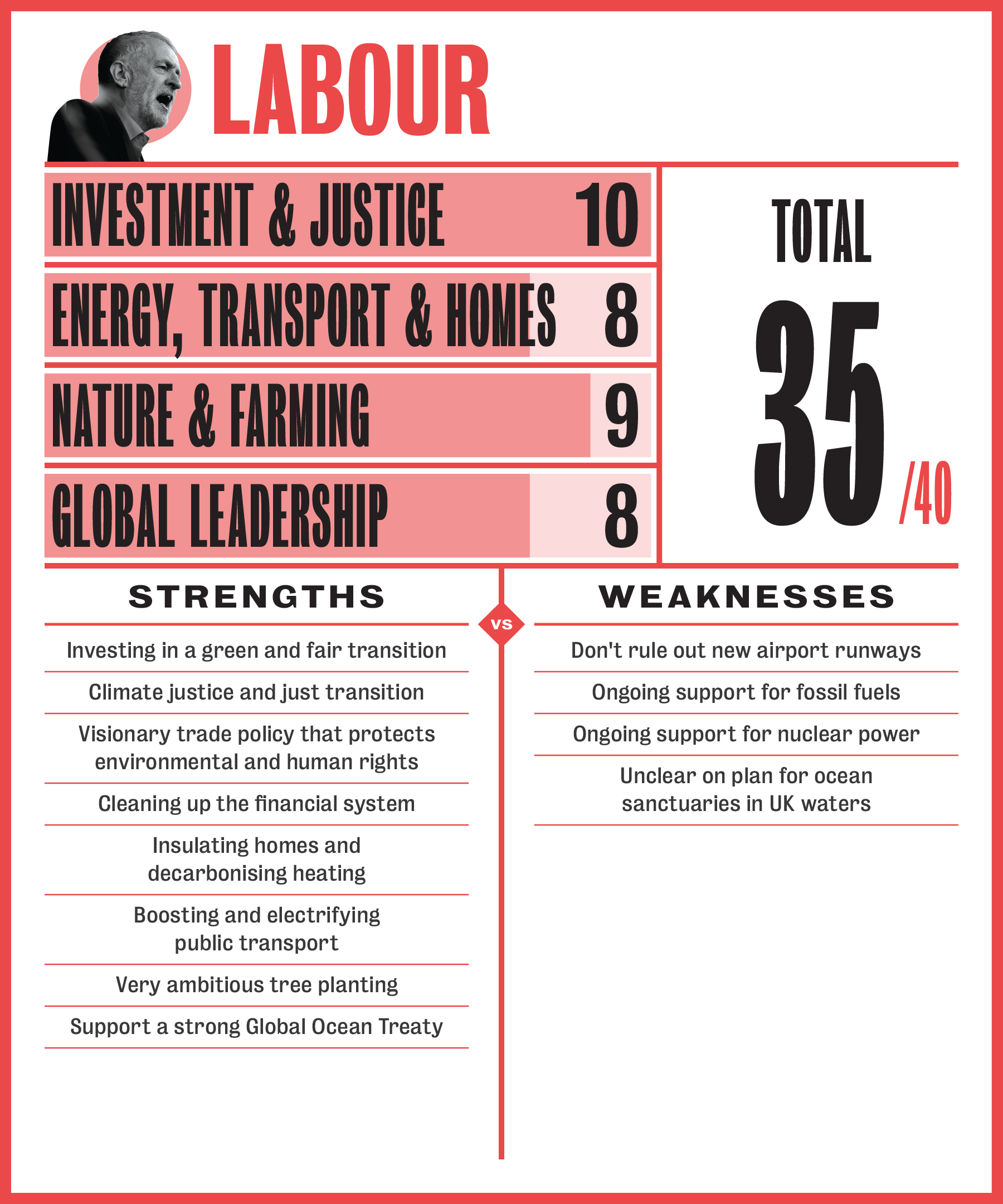 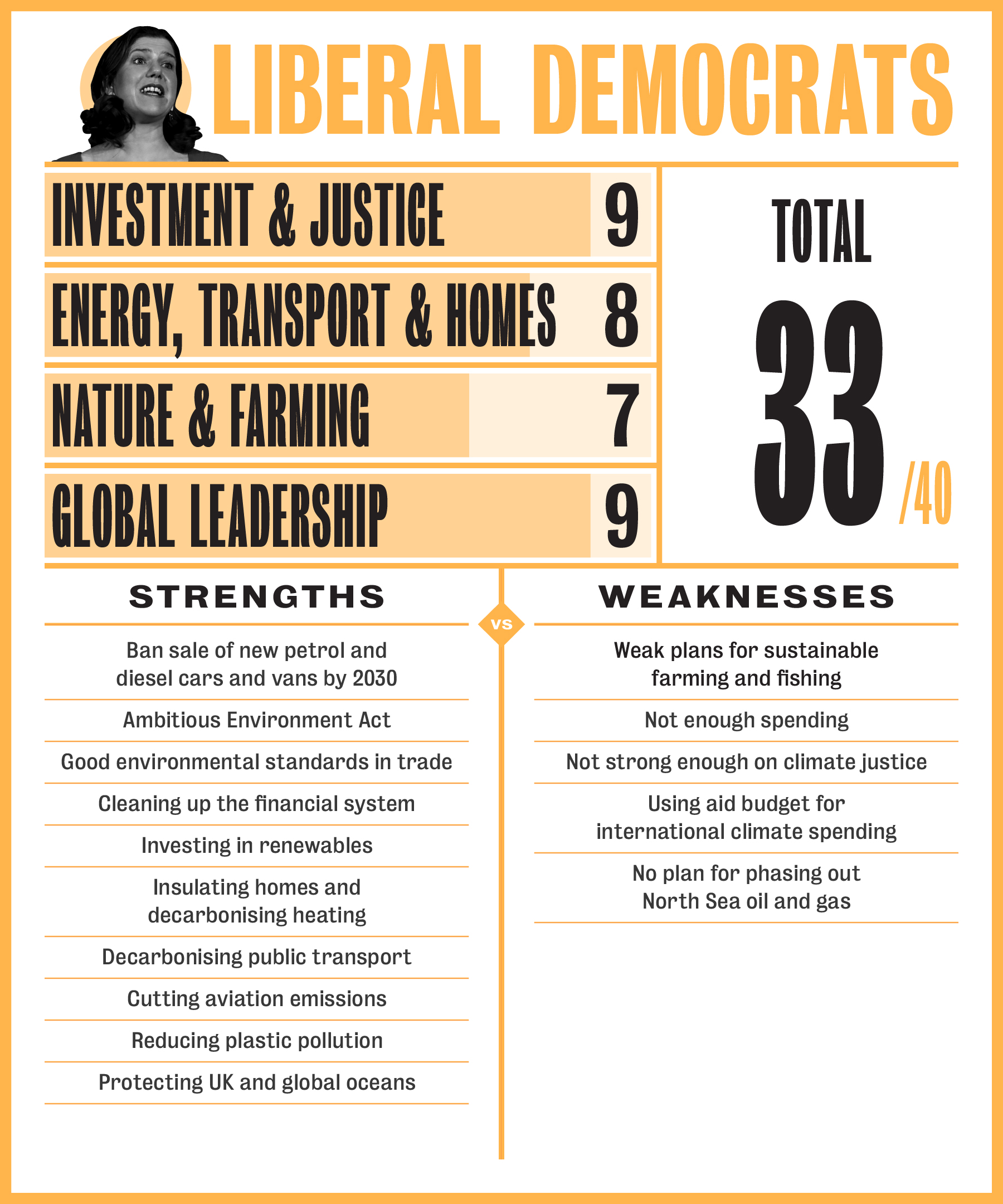 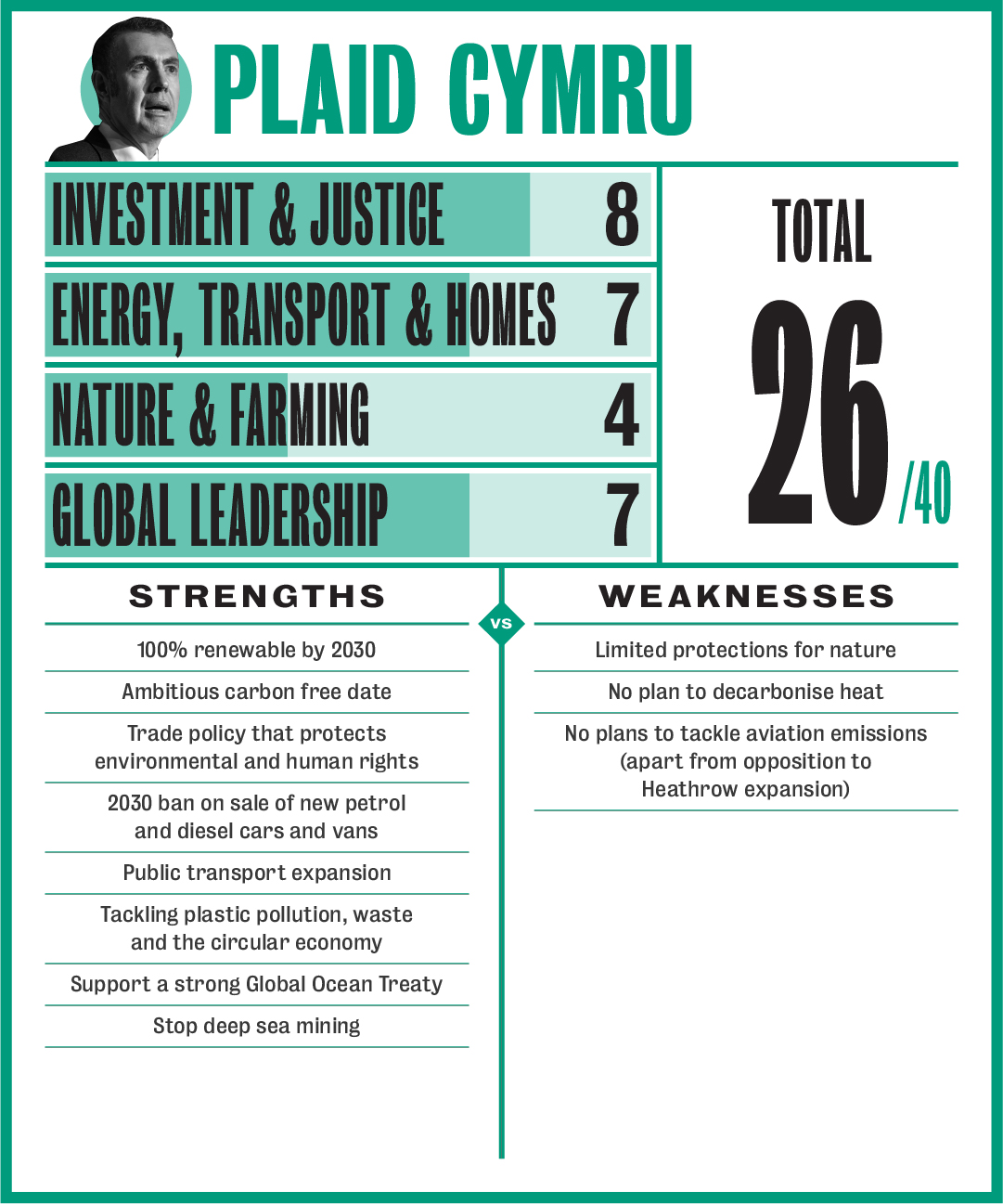 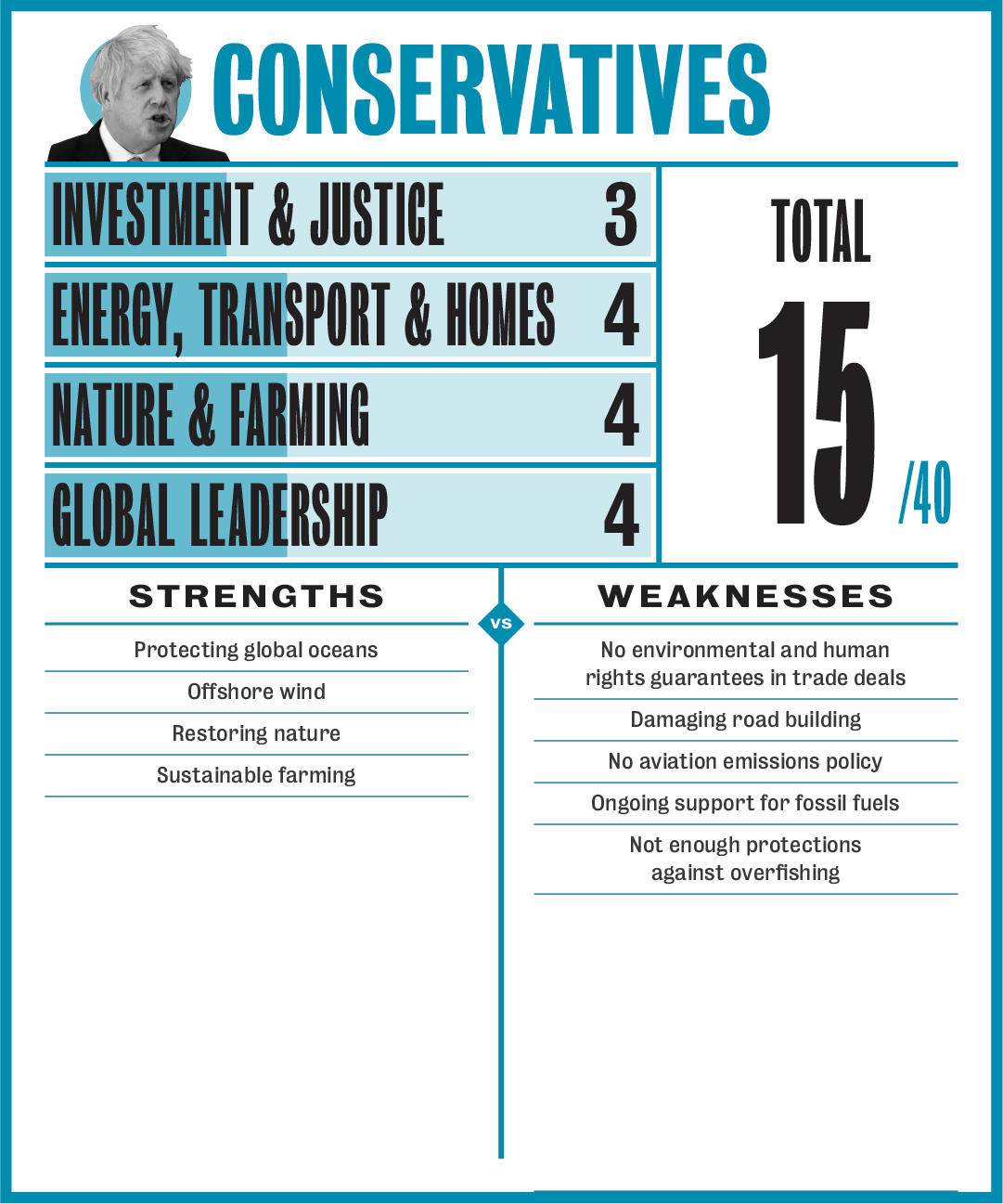 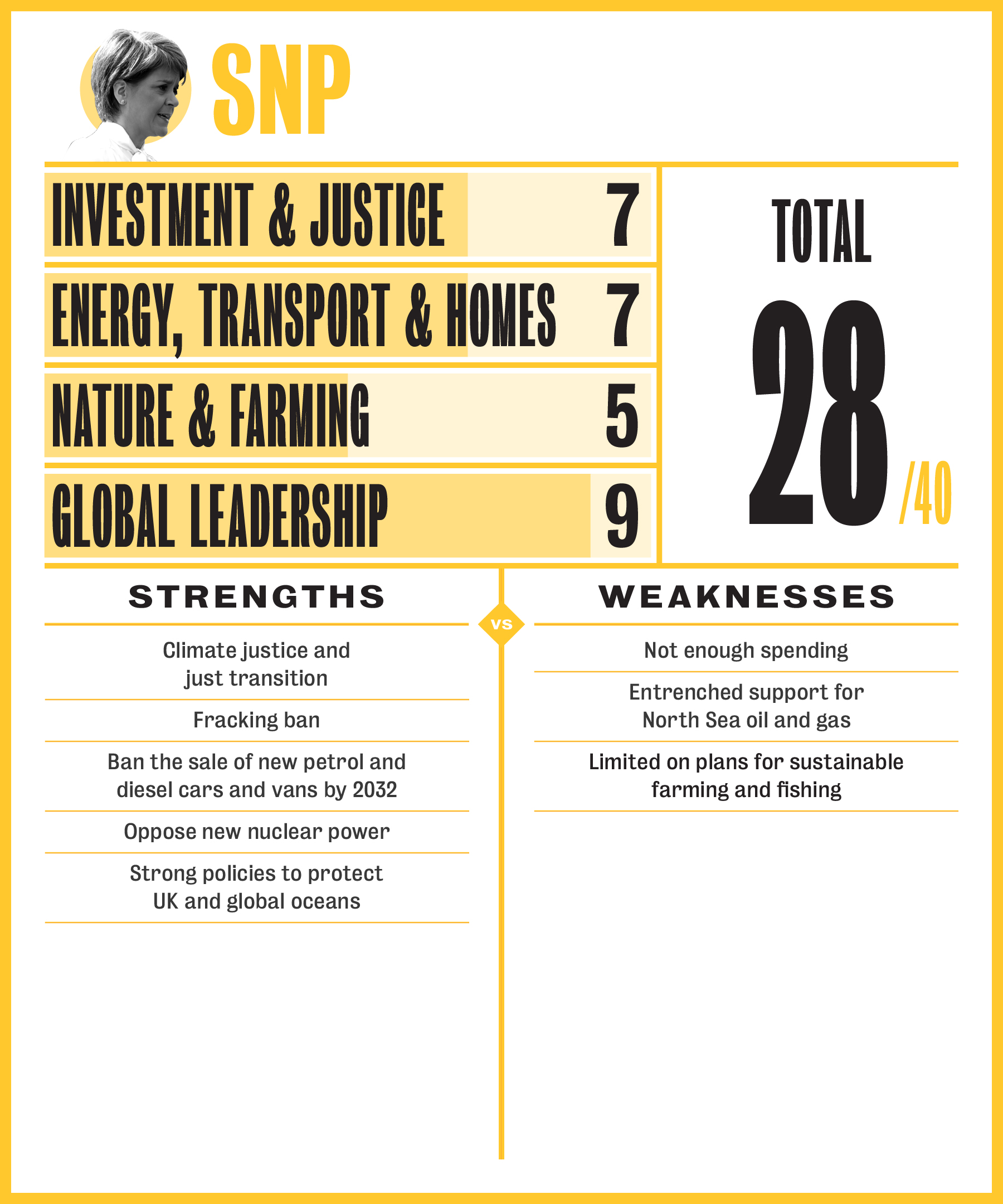 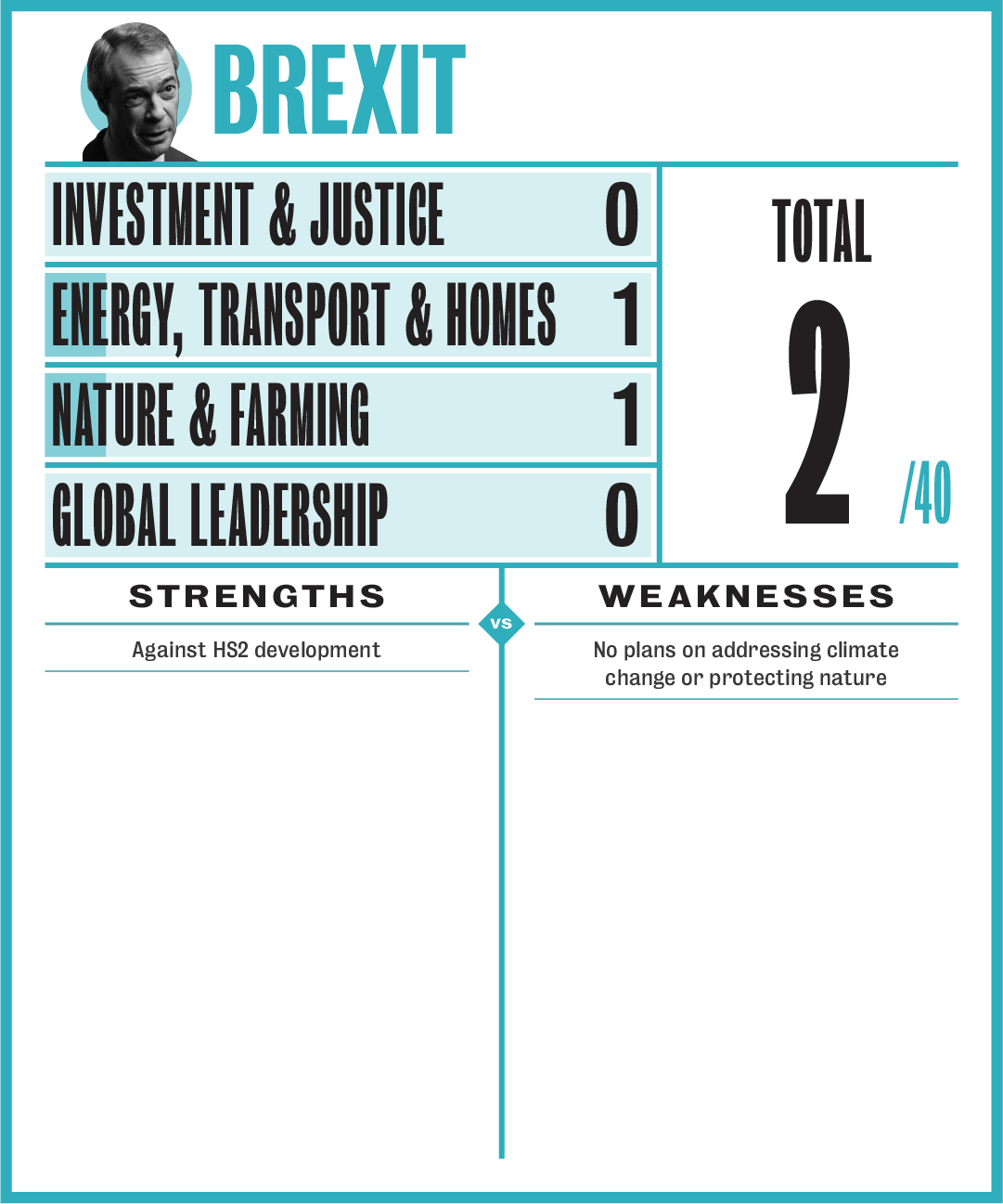 The manifestos were assessed on how they will solve four big problems, each of which is part of the solution to the climate emergency and the crisis in nature.

1. Investing to transform the economy supporting a just transition and global climate justice

The money each party will commit to climate and nature plans says a lot about their political priorities and how seriously they take these issues.

Like education, spending money on climate change and nature protection is investing in the future. The costs of not doing anything far outweigh the financial costs to the government now. It’s vital that whoever is next in power commits to delivering net zero as quick as possible, ensuring a just transition for UK communities – and taking responsibility for the UK’s historic contribution to emissions and helping support climate justice for the global south.

Changing our economy so it no longer relies on fossil fuels will need a lot of cash, as will restoring the UK’s natural landscapes to bring wildlife back from the brink. But perhaps not as much as people think. A broad group of organisations, including Greenpeace, have worked out that £42 billion per year would do it – that sounds a lot, but that’s about the same as the government spends on secondary education.

Changing the way we all use energy is essential, from how it’s generated to how much we use. Manifestos need to show how each party will power down from coal and oil, and power up with clean renewable energy like wind and solar.

They also need to demonstrate how the country’s homes will be made more energy efficient. Our heating systems will be made greener, and public transport will be improved and electrified to reduce the number of cars on the roads whilst cleaning up what remains. Emissions from flying also need to be contained.

Getting all this done will have additional benefits. Energy bills will be lower. Air pollution will be reduced, making cities cleaner and healthier. Homes will be warmer. And there’ll be better public transport allowing everyone to get about.

Nature in the UK is collapsing. Over 40% of the country’s species have declined in the last 50 years, and 15% face extinction in the UK. The next government will have to take urgent steps to reverse the situation, on land and at sea.

Farming needs to be reformed so nature isn’t pushed out, and organic food production encouraged. Fishing also needs a shake-up so the oceans can recover and so coastal communities get a better deal. Waste and plastic pollution need to be reduced, and wild spaces have to be restored so species can recover.

More and better natural spaces will help improve the nation’s mental health and wellbeing, as well as giving a boost to tourism. Allowing nature to flourish once more will mean the effects of climate change are less severe and help reduce flooding.

4. Being a global leader on climate and nature

The next government will need to be a major player on the global stage. Showing leadership in international negotiations will help protect oceans and the climate. They must also make sure trade deals safeguard human rights and forests.

Why should the UK be a leader on climate change? It was the birthplace of the Industrial Revolution, which was the start of rapidly increasing carbon emissions. So over time, the UK has contributed significantly to the climate crisis. That means it has the responsibility – and, as the fifth largest economy, the resources – to show the way.

Want more detail? Read how the manifestos were analysed and see the scores. Greenpeace policy analysts drew upon each of the party manifestos, as well as the following documents:

Letter from Sue Hayman, Labour Party Spokesperson on the Environment to Greenpeace

Letter from Labour Shadow Cabinet to Friends of the Earth

Letter from Wera Hobhouse, Liberal Democrat Shadow Secretary of State for the Climate Emergency to Greenpeace

The Green Party, Labour Party, Liberal Democrats and SNP have all confirmed that all of the additional policy clarifications in the documents above have the same status as those in their manifestos.

Party leaders rightly acknowledged in previous debates that climate change is the most urgent issue facing humanity. These manifestos show how serious they are, behind the headlines and soundbites that emerge from the climate election debate.