Although it’s not the type of extreme weather typically associated with climate change, extreme cold is yet another sign of the effects of global warming.

The 2021 cold snaps, reaching a record -25ºC in Spain and bringing snow to Greece, have impacted more than a billion people worldwide; 100 million in the US alone. From China to sub-zero Texas, people have suffered gravely with blizzard conditions, inadequate heating and failing energy systems.

There’s some pretty intense climate science behind it, explained below.

Yes, weird deadly cold may be a sign that global warming is messing with the weather

Global warming doesn’t mean that winter is cancelled. It may mean that, over time, there will be fewer, but more extreme, cold snaps like those experienced around the northern hemisphere in winter 2021.

Most people in the UK will remember the Beast from the East in 2018 – snow in March was a bit weird, wasn’t it? There were also some uncharacteristically snowy winters in 2010 and in February 2021.

Cold snaps are cropping up in places that don’t usually experience such extremes, like Texas in the US. There, the oil and gas powered systems that usually keep people warm and safe, completely failed. Some politicians still found a way to blame climate activists and renewables, though. More on this at the end.

First, let’s work out what caused the weather to get so weirdly frozen cold, and in places like Spain.

A warming Arctic, and the ‘cold blob’ in the North Atlantic, are bringing colder weather further south

Normally, the northern hemisphere’s coldest air is trapped in the Arctic. Milder and warmer air is found further south. It is this temperature difference (and the associated atmospheric pressures) between the north and the south which determines the strength of the jet stream. The jet stream (so called because it was discovered by pilots during World War II) is a powerful band of wind, high in the atmosphere.

The jet stream shapes the Northern Hemisphere’s weather, along with the Atlantic Ocean’s Gulf Stream currents. The Gulf Stream gets the main credit for making our UK winters generally milder and wetter than other parts of northern Europe.

In the past 30 years, the Arctic has warmed about twice as fast as the rest of the world, a phenomenon known as ‘Arctic amplification’. Scientists believe that with less bright white sea ice to reflect away the sun’s rays, the Arctic is getting warmer, faster than the rest of the planet.

Warmer Arctic air has shrunk glaciers and melted away a significant amount of sea ice. This has led to what some scientists are cutely calling a ‘cold blob’ – a patch of the North Atlantic ocean southeast of Greenland where glacier meltwater is cooling the ocean. This cold patch has messed with the Atlantic Ocean currents that underpin the Gulf Stream – which a new study has shown is weaker than it’s been in 1000 years.

The jet stream is also weakening. A strong jet stream will keep the cold air – and weather – contained in the north. A weak jet stream will develop deep ‘meanders’, which will draw cold arctic air southwards.

An unstable polar vortex is thought to be behind the jet stream weakening.

Along with a slowing Gulf Stream, the polar vortex could one day alter the UK’s climate permanently

The polar vortex is a giant swirling ring of low pressure and cold air, and one surrounds each  of the Earth’s poles, that keeps cold air trapped there. It’s at least 16km above the Earth’s surface. It’s too high to directly affect our weather, but it does have an indirect impact.

The polar vortex is always around the pole, but it weakens in summer and strengthens in winter. When it’s rotating nicely, all that cold air stays in the vortex. 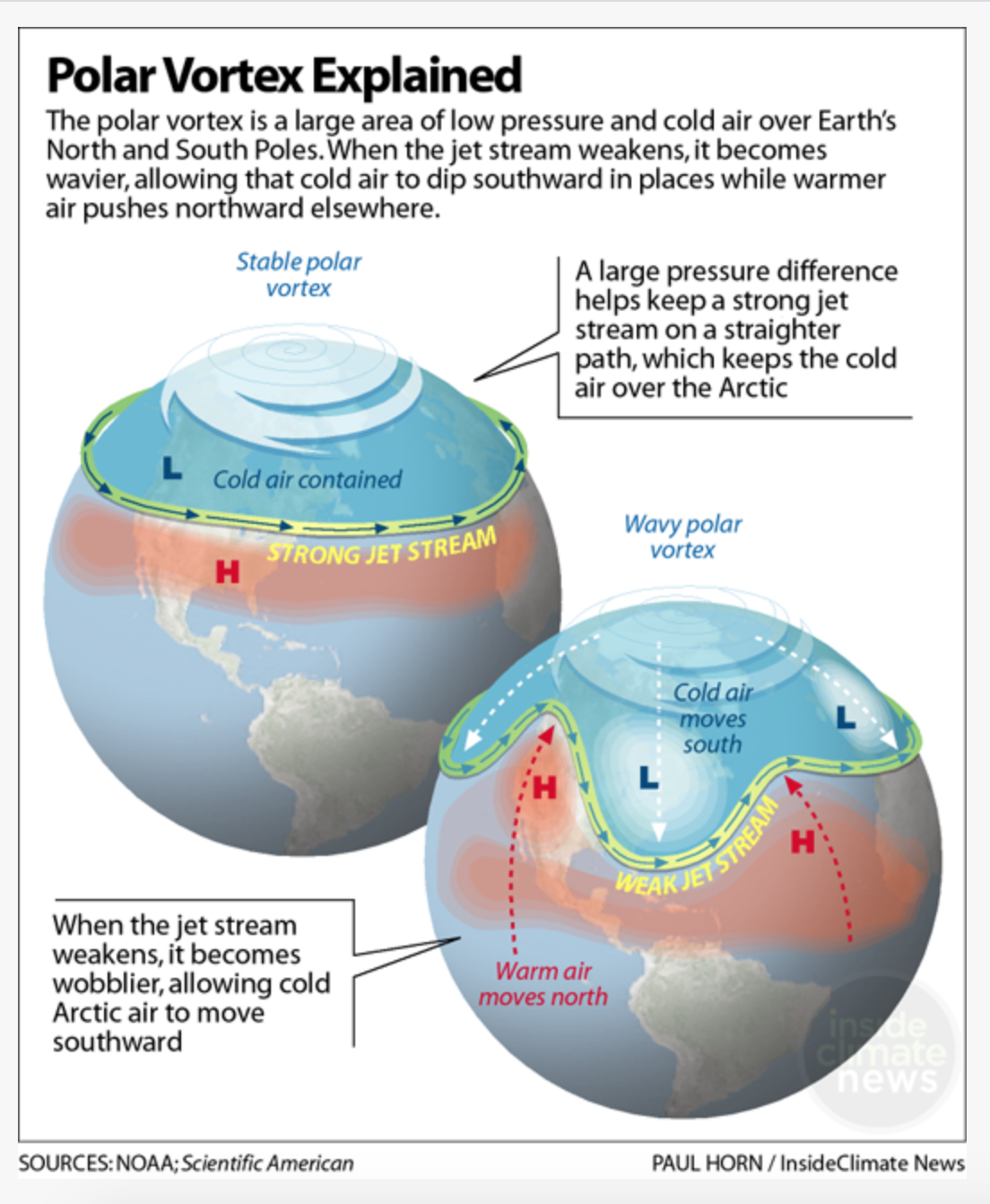 The relationship between the polar vortex and the jet stream. When the weakened jet stream starts meandering all over the place because of a wavy polar vortex, cold air (and therefore Arctic weather) escapes down to usually milder places like the UK, southern Europe and southern states of the US. Sources: NOAA; Scientific American. By PAUL HORN / Inside Climate News, with permission.

Scientists think it’s possible that warmer Arctic seas could be causing clouds of warmer air in the atmosphere, making the polar vortex more prone to wobbling or waving. This then makes the jet stream weak, pushing colder Arctic weather south.

And there is increasing evidence that the jet stream meanderings can actually become persistent and stable.

Remember the ‘cold blob’, and that slowing Gulf Stream? Scientists also think that it might slow to the point of no return, and effectively switch off. This would permanently alter the climate on both sides of the Atlantic.

So one day, we could have much longer-lived extreme weather events leading to extended cold snaps, heat waves, droughts and flooding, with extremely bad consequences for things like farming here in the UK.

In short, these bitter cold snaps, whatever the climate deniers might say, are actually further evidence of the impacts of global heating.

It’s almost impossible to say what effects an unstable polar vortex and the weak jet stream will have on our weather systems in the future. Whatever happens, many of the unpredictable climate impacts on people will no doubt continue to be severe.

What this winter has shown is that climate change isn’t just about fires and floods. It’s also about extremely complex and almost unpredictable extremes of hot and cold – that leave even the most fossil fuel energy-rich areas facing unimaginable suffering.

In February 2021, some four million Texans were left without power. Residents lit fires to stay warm. And then some of those houses ended up burned to the ground – as the water in the fire hydrants had frozen solid.

Energy has been cheap in Texas for years, thanks to its massive oil and gas drilling industry. But during its freak freeze, power cuts against a background of deregulation caused surging prices and many were left without. Conservative politicians, who spent their careers taking money from fossil fuel corporations, blamed wind turbines. In reality, frozen gas, coal, and nuclear plants were to blame.

Texas’s energy systems are the result of years of well-documented climate denial, disinformation and fossil fuel lobbying. And they were not designed to serve everyone equally.

The systems and societies which emphasise public good over private profit will be better equipped to deal with the ravages of the climate crisis. And those societies and systems will also be more able to stop the worst-case climate scenarios destroying the things we care about.