What does Brexit mean for farming, fishing and climate change?

The UK is leaving the EU. But what does this mean for environmental laws and standards? How are fishing, farming and climate change going to be handled from now on? There’s not much detail yet, but here are a few areas to watch as the government passes new laws and paves the way for future trade deals.

It also marks the beginning of the transition period, which runs until 31 December 2020, meaning not much changes until then and much carries on as before. The government has banned any extension to this, meaning the UK will have 11 months to negotiate, well, everything.

While it’s really hard to know what’s going to happen, here are a few key areas to watch.

What are the key environmental issues Brexit raises?

The UK will be removing itself from any obligations to the world’s largest body of environment laws and the institutions that enforce them. Most of our wildlife and habitat protection rules, for example, come from EU directives, as do important standards for water pollution, air pollution and hazardous chemicals. There’s now the opportunity to exceed EU standards in all of these areas.

But the full impact on the UK’s environment – and economy – brought by Brexit won’t really be clear until the EU and the UK have negotiated their future relationship for 2021 and beyond.

To complicate matters, Brexit’s highest-profile environmental issues are also major matters relating to future UK trade, both with the EU and the rest of the world – like fishing and farming.

Fishing needs a shake-up so the oceans can recover and so coastal communities get a better deal. Farming also needs to be reformed so nature isn’t pushed out by industrial agriculture at the expense of habitat restoration, and more organic and nature-friendly food production should be encouraged.

And as the UK begins to negotiate new international trade agreements, we must make sure these trade deals protect human rights, forests and other ecosystems around the world.

Will farming standards have to drop to do trade deals?

Over the coming 11 months, UK government ministers will also be tasked with deciding what system we use to replace the EU policies which have governed UK farming for several decades. These policies have rewarded land ownership, instead of what has been done with the land.

Early commitments from government suggest a move to a system of rewarding farming practices that benefit the environment and the climate. This is encouraging, but much more detail is needed.

For instance, farming needs to be reformed so that nature, which has been heavily damaged by industrial agriculture, can recover. Less land should be used to graze and grow crops for animals so more land can go back to woodland and other wildlife rich habitats. And around seven hundred million trees need to be planted in the next 10 years in order to help soak up carbon already in the atmosphere.

Another key point is what the UK will require in terms of food hygiene and animal welfare standards to replace trade deals lost by quitting the EU. This is a flashpoint, particularly with reports about chlorine-washed chicken and hormone-treated beef becoming the norm in the UK (like they are in the US) making headlines.

Investigative journalists at Greenpeace’s Unearthed have detailed how the trade officials may weaken the UK’s food and environmental standards to secure a trade deal with the US. Agreeing to US demands may in turn limit Britain’s ability to negotiate an agreement with the EU, and this in turn increase the likelihood of a hard border in Ireland.

It’s safe to say that, despite these guarantees, Brexit raises major questions about our environmental and food safety standards, certainly in terms of farming.

There are big questions about fishing as well. The government has recently suggested that all fish stocks in UK waters will be fished at sustainable levels after Brexit. But the latest draft of the fisheries bill contains a handful of get-out clauses to dodge sustainability standards.

The government’s intention is that this will be sorted in advance of the UK no longer being required to comply with EU fishing policies at the end of December 2020.

But here’s the catch: fishing is a really contentious area of post-Brexit Day trade talks. While the UK will be able to “take back control” of fishing rights to its own waters, it’s also a hugely important part of the EU’s coastal economy. This could mean fisheries becomes a sticking point in negotiations.

The UK government has always had the power to improve sustainable fishing and give coastal communities a better deal than at present. Regardless of what happens with the negotiations, the government can take advantage of this moment to change how fishing rights or quotas are distributed, to ensure that those who fish in harmony with nature and deliver jobs in the local economy get a bigger slice of the pie.

Right now, over a quarter of the UK’s fishing quota is owned or controlled by just five families, whereas the small-scale fleet (which makes up 79% of UK fishing boats) holds only 2% of UK quota.

The environmental or social impacts of fishing fleets are not considered when deciding whether they’re allowed to fish in UK waters. As a result, unsustainable fishing methods are prevalent across the sector (like the use of heavy beam trawling), and many coastal communities have also lost out in terms of employment, port-based investment and tourism.

Instead, the fisheries bill that’s currently going through parliament should require that fishing quota is allocated in a fair and transparent way, based on environmental and local economic criteria. This would reward fishing fleets that deliver genuine environmental, social and local economic benefits – helping return the lifeblood to many communities as they return the catch for processing and sale in the local area.

Will Brexit have any impact on the UK’s climate commitments?

Finally, just because we’re leaving the EU, it doesn’t mean there are fewer environmental obligations for us to worry about – particularly when it comes to climate change.

If anything, the UK has to really step up its commitment to action on climate change and biodiversity in 2020, because of its upcoming role as host to the UN climate change meeting – COP 26 – in Glasgow. Successful international leadership must start with getting the UK’s own house in order.

Brexit may have been dominating the headlines for the last three years. But now that it’s underway, the UK must focus on its own climate commitments to deliver net zero as quickly as possible, and make our own contribution to the goals of the Paris agreement.

It’s worth remembering that international cooperation – including with Europe – is essential for good environment protection and to tackle problems like climate change. There are too big for individual countries to tackle alone and don’t stop neatly at national boundaries.

The laws governing the UK's environment will be reshaped, and there's an opportunity to restore and protect nature. Greenpeace will be fighting for a land that is truly green and pleasant – get the latest updates about how you can help. 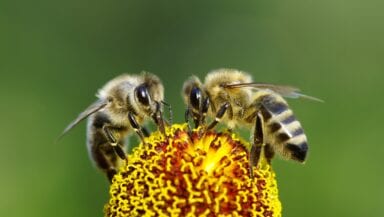 Bee-killing pesticides are making a comeback. Here's how we can stop them.

The government has just given the green light for bee-killing neonicotinoid pesticides to be used in the UK. It's up to us to reverse this dangerous decision.