Fungi comes in all joyous shapes and colours, and is everywhere in the UK. Some might make you blush, some may inspire you to wonder for the world beyond. Some may remind you that despite everything – nature is awesome.

One quick safety point before we start: this article is meant as lighthearted introduction to the UK’s amazing fungi, so you shouldn’t use it as a guide to finding edible mushrooms. Ok, let’s get to appreciating some of the UK’s most fantastic fungi!

Arguably the most famous fungus of them all. Not only is it an emoji, you’ll find depictions of the red and white mushroom in fashion, art, film, and video games. 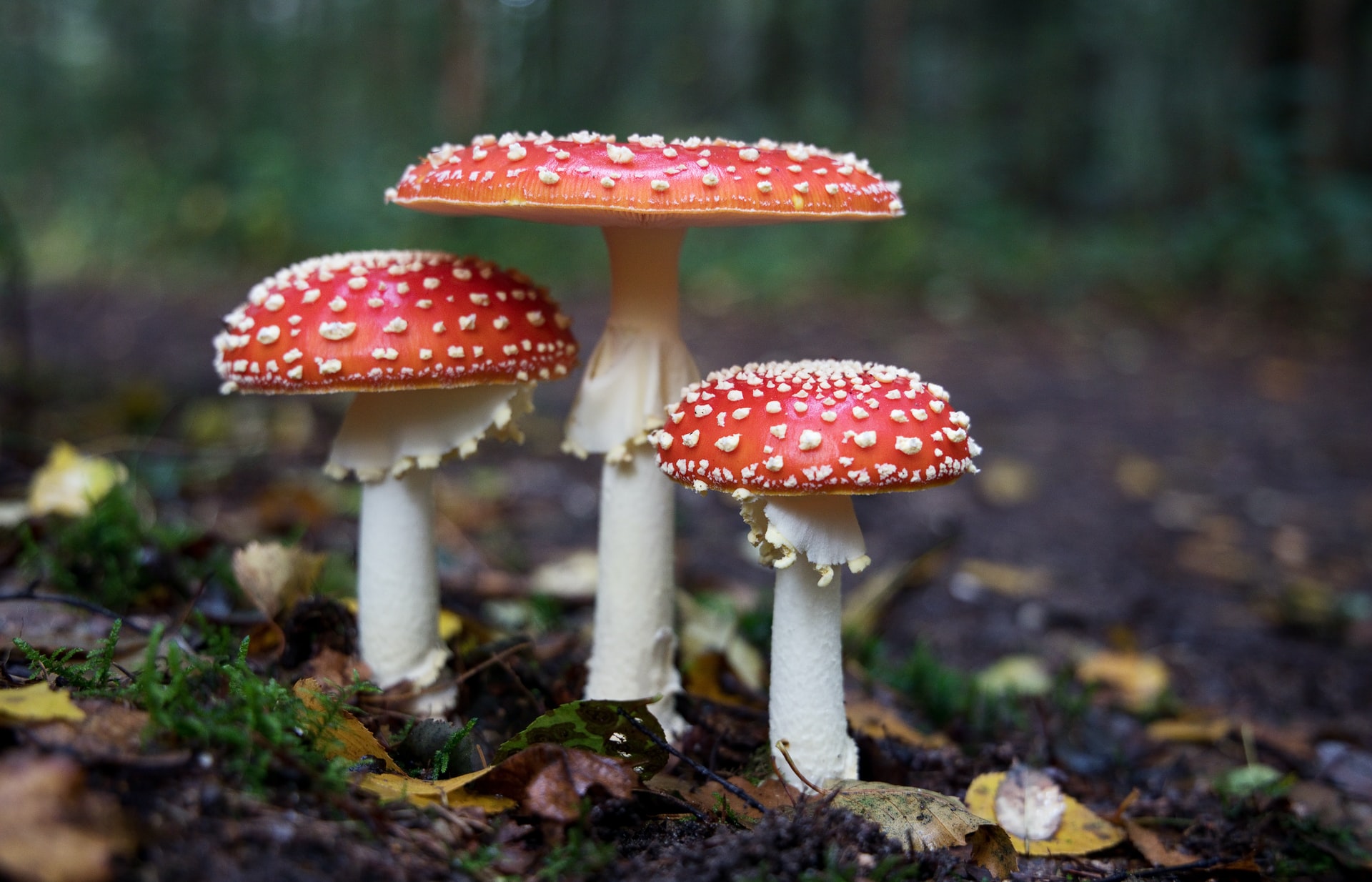 You’ll find them under Birch trees in woodland around late summer and autumn. Despite their fairytale appearance, Fly agarics are toxic. So best not try this one at home.

Ok, so these lil creatures are rare in the UK. But they’re too amazing to leave off the list.

This fungi looks like one of Cthulhu’s pets from the underworld. Its life cycle is straight out of a horror movie. First it hatches from a slimy, gelatinous ‘egg’. As it grows, the bright red tentacle-like arms erupt from the egg like something from your worst nightmares. Watch the timelapse above to see what I mean.

This fungus looks like a gelatinous, deliciously disgusting, bright, yellow mess. And most definitely has the best nicknames of the lot.

Art and actions at Greenpeace UK 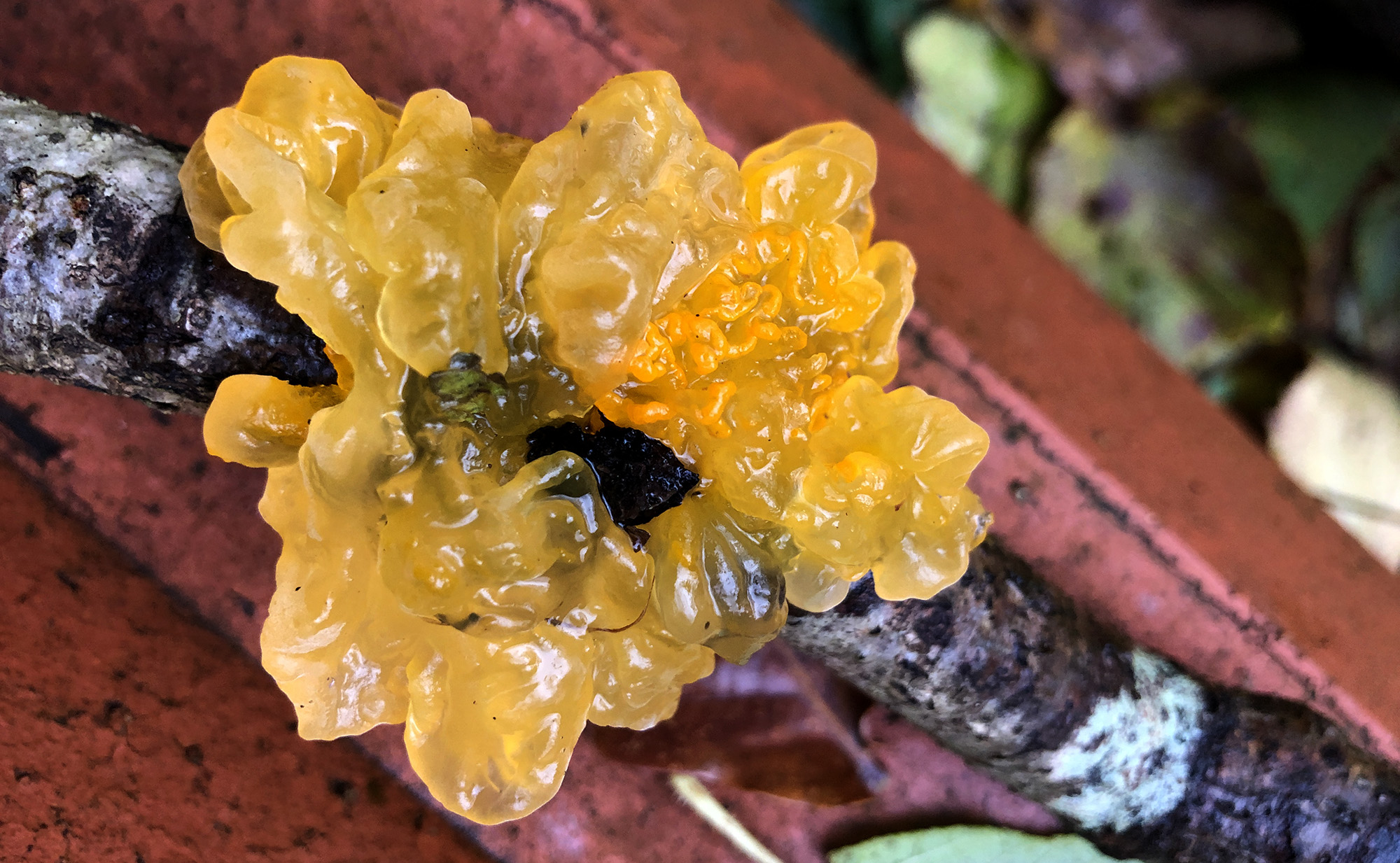 It’s impossible to resist the temptation to give this fungi a good ol’ wobble. It can be found clinging to sticks and branches.

The common stinkhorn wins by a country mile for best latin name – Phallus impudicus – but this tropical variety is probably the most impressive. Watch the video and wait for the drop…

Common stinkhorns emerge out of an egg, known as a “witches egg” and as it grows it has a green coating on the tip called the gleba – which smells like rotting flesh. Flies eat the gleba and leave behind a white conical tip. It is very common in the UK, Ireland and most of mainland Europe. It grows in all types of woodlands and gardens.

An ear-like fungus that grows on Elder trees. If you’re lucky you can find these out and about in January and February. 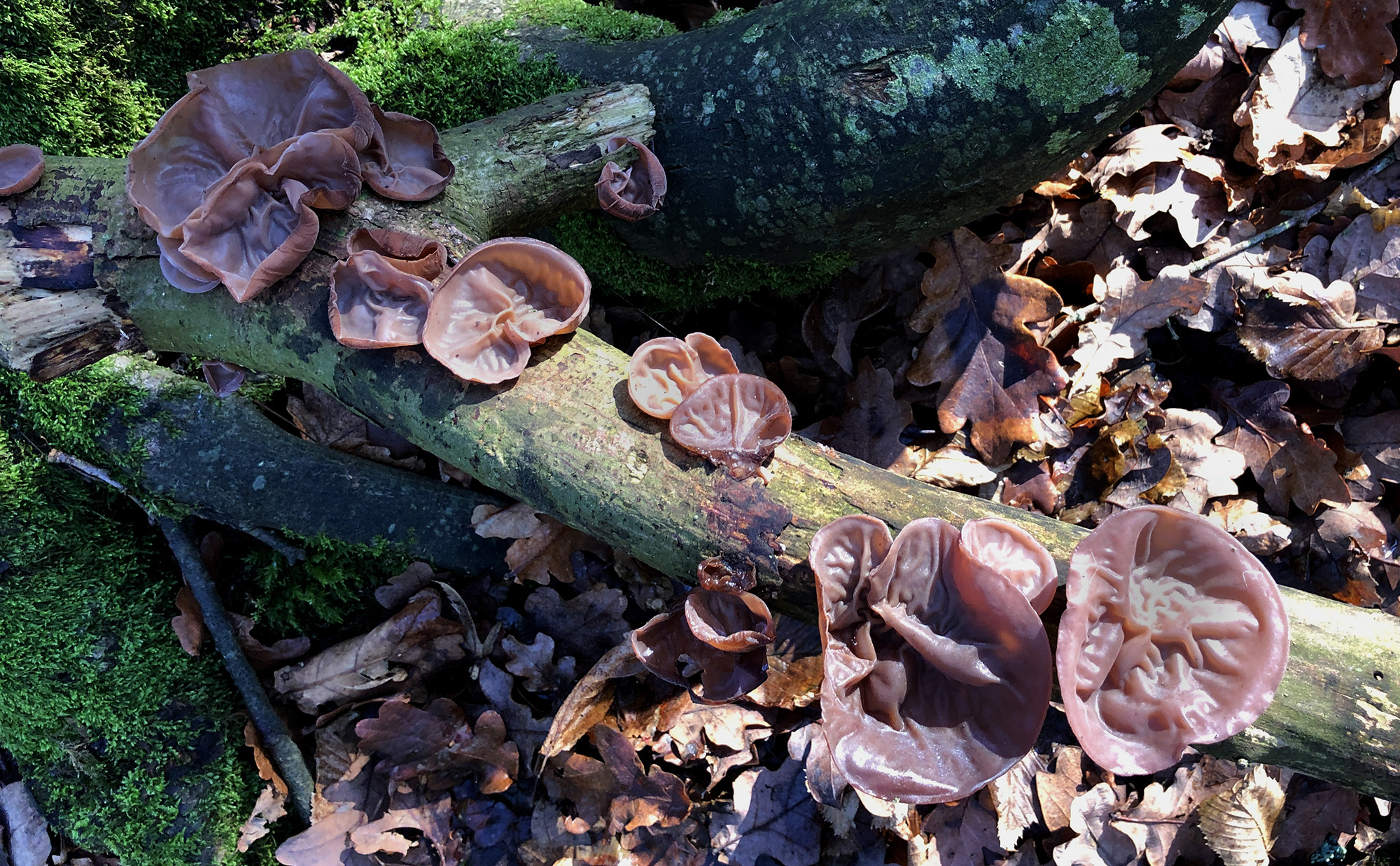 This one has an interesting and dark history. It used to be known as Jews Ear. And that is still present in the latin name. It was originally named after the apostle, Judas, who allegedly hanged himself from an Elder tree. These days, that name is no longer used or accepted. Wood ear is a much more fitting name for these fleshy humanoid fungi.

As the name suggests, this fungi looks like it’s covered in shaggy fur. The underside starts out white, then turns black and secretes a black liquid filled with spores (hence the ‘ink cap’ name). Swipe through the slideshow below to see how it transforms in just a few days.

It is very common and can be seen at the roadside, in parklands and even popping up in lawns.

7. Chicken of the woods

Huge. Weird. Alien-like. And an utter joy to find! This fungus has a bright sulphur colour that fades to a pale yellow. 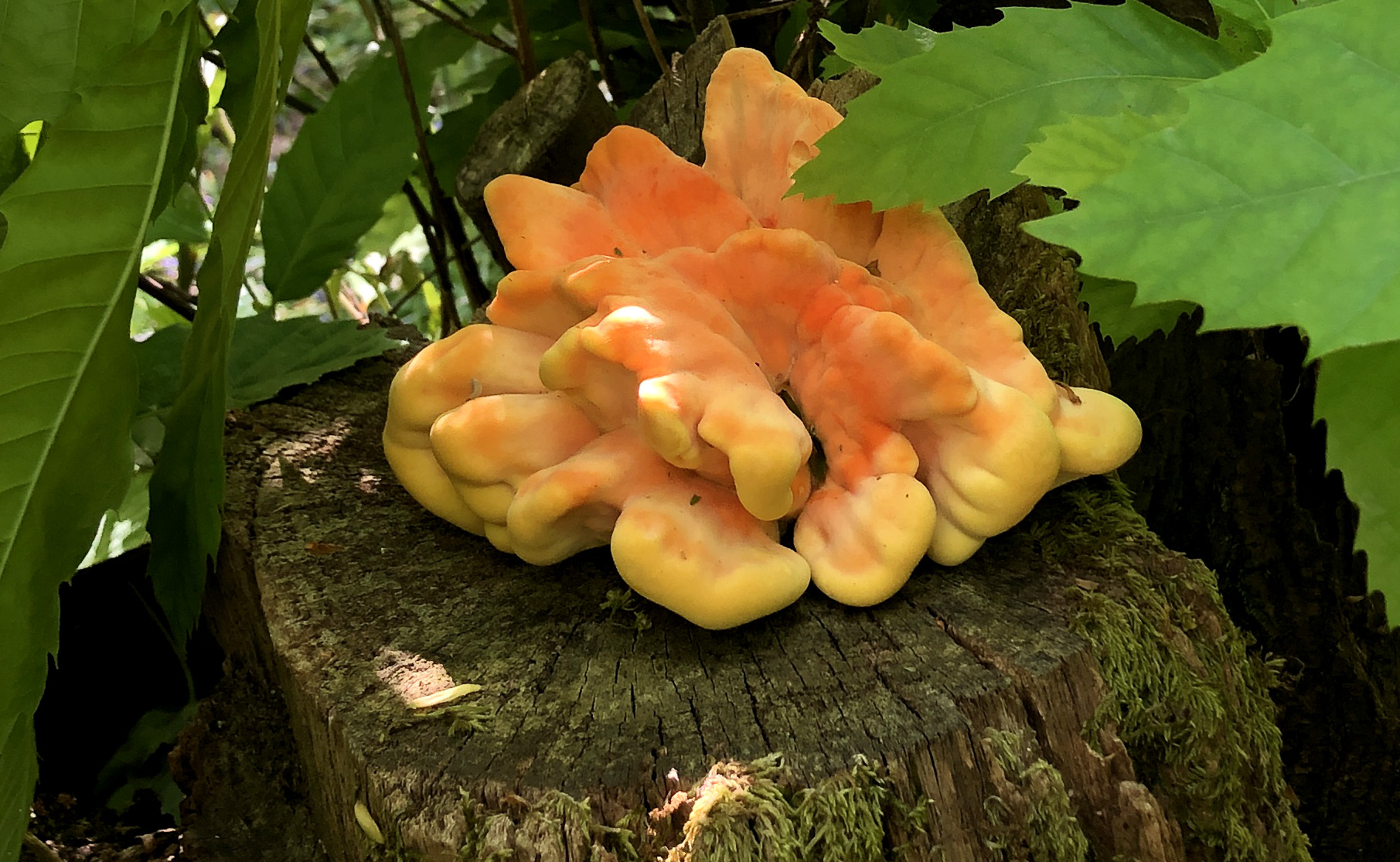 When young, they’re plump and fleshy; but as they get older, they spread and fan themselves out. It fruits from May to August on trees and stumps. Not to be confused with ‘Hen of the Woods’ which is a different fungi with a confusingly similar name.

Turkey tail is a species of fungus that closely resembles – you guessed it – a turkey’s tail. (I love how the fungi world is so literal).

This glorious fungi is very common and can be found on rotting stumps and branches throughout the year – though apparently they are at their best in autumn and winter.

The puffball grows in fields, gardens, along roadsides, and in grassy clearings in woods. Looking closely you can see it’s covered in spines and warts.

There are several types of waxcaps – some of the brightest fungi you’ll stumble across. The grassland fungus earns its name because of its waxy top (as well as being considerably slimy in wet weather). 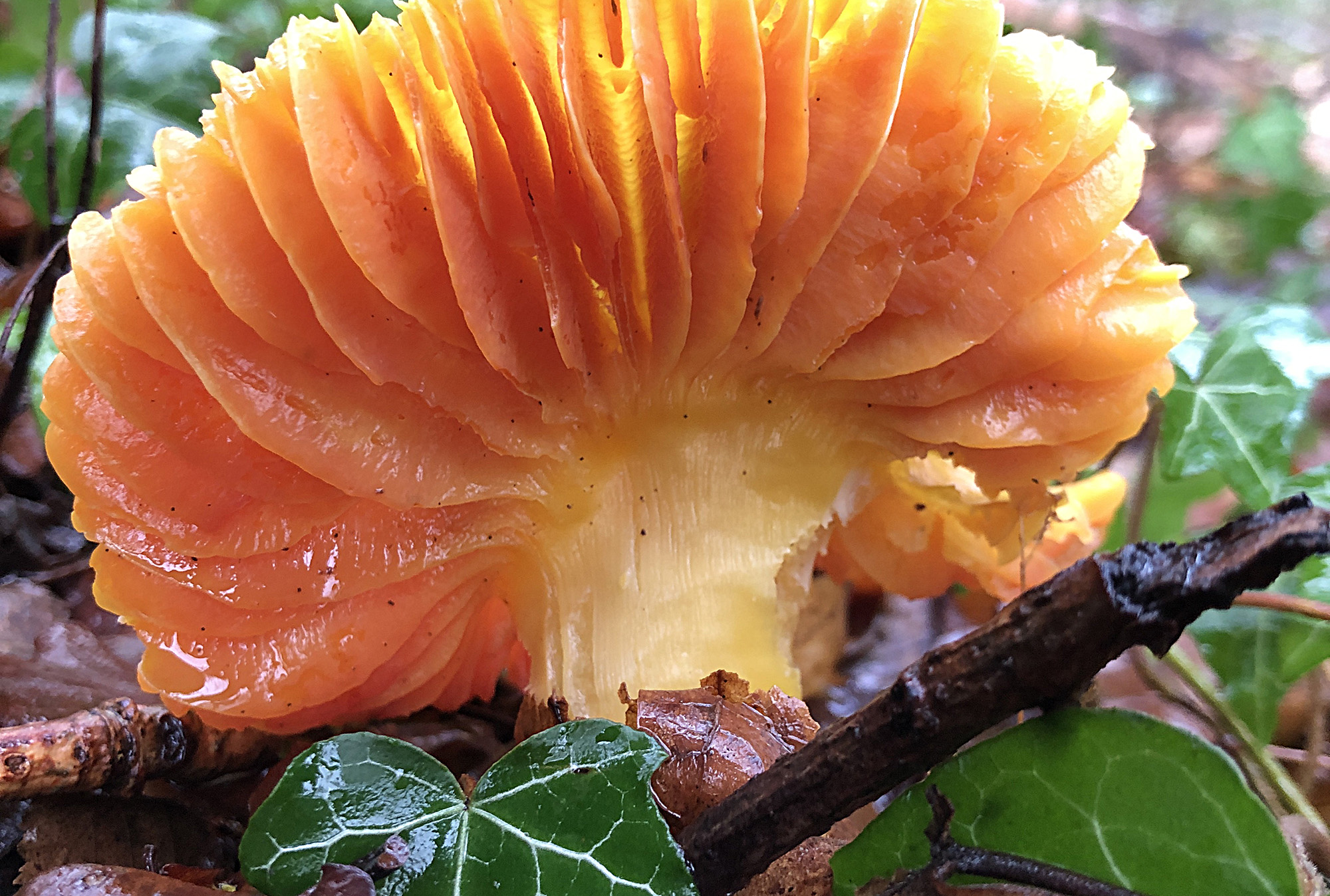 Some waxcaps are protected – so as with all fungi finding, it’s best to look but not touch. The grasslands of the UK, particularly in Wales and Scotland, are amongst the most important in the world for grassland fungi.

A small pretty purple mushroom that pops up in the autumn through leaf litter in woodland.

When they get older their colour fades and they can get mixed up with their neighbour the Deceiver (hence the name) which are just as cute, but brownish.

Where to learn more

If you’d like to learn more about the fantastic world of fungi, we recommend always cross-referencing across several sources (online and offline). Getting a few good books, avoiding those automatic ID apps (scent is often an essential part of identification), and consulting experts. Here are a few resources to get you going:

And Greenpeace UK’s own amateur enthusiasts: 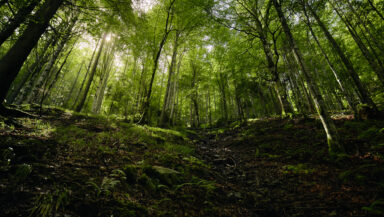