The coronavirus lockdown gave the UK a chance to experience low-traffic, clean streets – ideal for safe cycling and walking. So why is the government spending £27 BILLION on new roads for high-polluting private vehicles?

During lockdown, there were fewer cars on the road, the sky was clearer, birdsong was louder and things seemed calmer. Air pollution plummeted. Many people got more comfortable with the idea of walking, cycling, and using new forms of travel (like e-bikes and scooters) to get where they needed to go.

Transport is the UK’s largest source of greenhouse gas emissions – the vast majority coming from cars, vans and trucks. But as lockdowns were imposed across the world, the UK’s contribution to climate change temporarily dipped.

Spending £27 billion on the problem, not the solution

It feels like a no-brainer – in order to keep air pollution levels low and to help fight climate change, there should simply be fewer cars on the road.

But instead, the UK government has committed itself to the largest ever UK road building project – costing £27 BILLION of taxpayers’ money over the next five years.

£27 billion is a hard sum of money to imagine – it’s ginormous. But all we’ll have to show for it is 4,000 miles of new tarmac across 40 different projects. In comparison, the government has only committed £2 billion to help increase walking and cycling. Just one road expansion will cost up to £6.8 billion – and we are in a coronavirus-driven recession. This raises the question – is there a better way to spend these billions?

Road building at this scale is a bad idea. Counterintuitively, expanding roads won’t solve the UK’s traffic problems. It will encourage more people to buy cars, generating ever more enormous amounts of traffic. This will increase pollution, congestion and greenhouse gas emissions – and make it even harder to clean up our air and stop climate breakdown.

This amount of road building will irreversibly scar beautiful countryside and historically important landscapes. It’ll also extend the threat from traffic and its pollution to previously unspoilt areas.

Already a legal challenge against the road building project is underway. The Transport Action Network argues that it doesn’t fit with the government’s legally binding ‘net zero’ climate commitment.

It also says the programme undermines the Paris climate agreement – the global treaty to keep emissions under control.

How the £27 billion could better spent

Right now the government has its priorities in the wrong order. Fewer than one in seven people believe money should be spent on more or bigger roads.

Spending billions on new roads will only create more traffic and lock in more carbon emissions. The government needs to invest in healthier, sustainable and more affordable alternatives.

It means reworking our cities and towns to prioritise walking and cycling. And that should include e-bikes and e-scooters, which help people travel further with ease.

This electric bike is already taking me to beautiful places I haven't seen in years due to my disability. I'm so happy with it 🧡 pic.twitter.com/HQoucvcN2I

It means investing in more frequent and comfortable bus and train journeys. It means boosting public services to help people get around safely. And it means planning and designing our communities to be accessible to those without a car.

Lessons to learn from lockdown

People are understandably hesitant to get back on buses and trains. People who can afford a car will start travelling in the way they feel most safe – risking more traffic than ever.

But one of the big lessons of lockdown is that not everyone needs to travel to an office every day. The government could reduce the need for travel by updating the country’s internet services and encouraging employers to allow remote working. They could also expand the hugely popular ‘Fix Your Bike Voucher Scheme’, and encourage train companies to introduce cheaper and more flexible season ticket prices.

They could invest in new, cleaner and faster buses and trains – making public transport less crowded and better for social distancing.

Keeping private cars off the road would help keep our air clean and reduce the UK’s climate impact. These are all things people already want – even the prime minister himself!

It’s not enough to switch to electric vehicles (EVs) alone. Not only will the transition take too long to address the immediate climate crisis, EVs have their own environmental impacts, and do little to reduce road casualties and congestion.

Equal access to better transport is crucial. It’s particularly vital that the the transport system meets disabled people’s needs. Shamefully, only 45% of trains in the UK have been built to modern access standards – and 41% percent of stations do not have step-free access to all platforms.

Walking, cycling or taking public transport won’t always be possible for everyone. For some – especially those living in rural areas – the only option right now is to drive. But if the government makes the right choice, millions more people can have more access to sustainable, fair and affordable transport.

This isn’t just to reduce emissions and increase air quality. Problems with poor public transport links to cities can also contribute to social isolation for people without cars. For example, residents from a small community in Bridgend said they felt trapped and isolated after their evening local bus service was cut during the height of the pandemic.

By failing to invest enough money into helping people get around without a car, the UK government is worsening the massive inequalities people already face.

The UK is one of the most car-dependent countries in Europe. Many services are now based on the assumption that users will access them by car. But if you’re a lower income household, it’s likely you don’t even own a car.  This means many people can’t access important local services and activities. Jobs, learning, healthcare, food, shopping or leisure are often out of reach because there aren’t adequate transport options.

Beyond this, low income households and other vulnerable groups (such as children, the elderly, people with mental disabilities or long-term illnesses) are also more exposed to air pollution from road traffic because they are likely to live in dense urban areas.

Investment in fair, affordable and sustainable travel doesn’t just make sense for the environment – it will also help fix the inequalities in our society.

Volunteers spray chalk stencilling to call for a green recovery 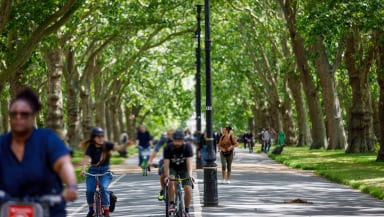 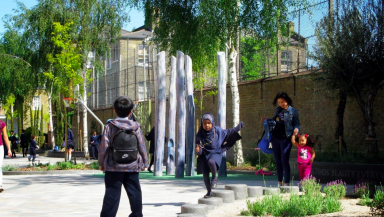 Social distancing has forced cities to rethink their streets, turning car-dominated spaces over to walking and biking. When they see the difference it makes, they might never turn back. 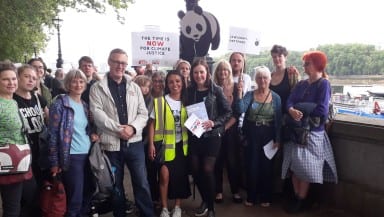 While Greenpeace’s work makes the headlines, people behind the scenes are making sure that MPs and other representatives hear the message too. Our UK-wide network of political lobbying volunteers is helping to win some major victories.