You’ll likely have heard some stats and facts about plastic pollution in the ocean, like the common warning that there’ll be more plastic in the ocean than fish by 2050.

Plastic pollution in the oceans seriously affects sea life – injuring and trapping turtles, dolphins and whales and confusing birds and other creatures into thinking it’s food. Ocean plastic therefore very easily enters the food chain, and is consumed by people when they eat fish or shellfish.

But given that it’s all manmade, it’s not as hard as you think to cut single-use plastic pollution, by aiming to buy better as much as we can – and by putting pressure on those with the power to make changes at scale.

How much plastic is in the ocean and how did it get there?

Researchers have estimated that up to 12 million tonnes of plastic ends up in the ocean every year – that’s the equivalent of a rubbish truck every single minute. But how does plastic get into the ocean?

Most of the plastic pollution in the ocean starts out on land. It mainly comes from household and commercial waste, which blows from waste bins and landfill sites into rivers or sewers, then flows out into the sea.

Plastic pollution in the ocean also comes from our clothes. Tiny “microplastics” escape down the drain when we run synthetic clothing through the washing machine. An average load of laundry might release around 700,000 microplastic fibres, less then a millimetre in length, into the water. These are too small to be filtered and so they end up collecting on riverbeds or washing out to sea.

Around 20% of plastic in the ocean comes from human activities at sea – mostly fishing. In 2019, a Greenpeace report found that each year, 640,000 tonnes of “ghost gear” – abandoned, lost or discarded fishing equipment – enters the ocean and is left there. That’s 50,000 double-decker buses’ worth of plastic every year.

How does plastic pollution in the ocean affect sea life? And is ocean plastic harmful to humans?

Plastic in the ocean affects all kinds of sea life. Turtles mistake plastic bags for jellyfish, which they eat, and sea birds often confuse bits of floating plastic with food too – leading to stomachs full of plastic, which can end up killing them. 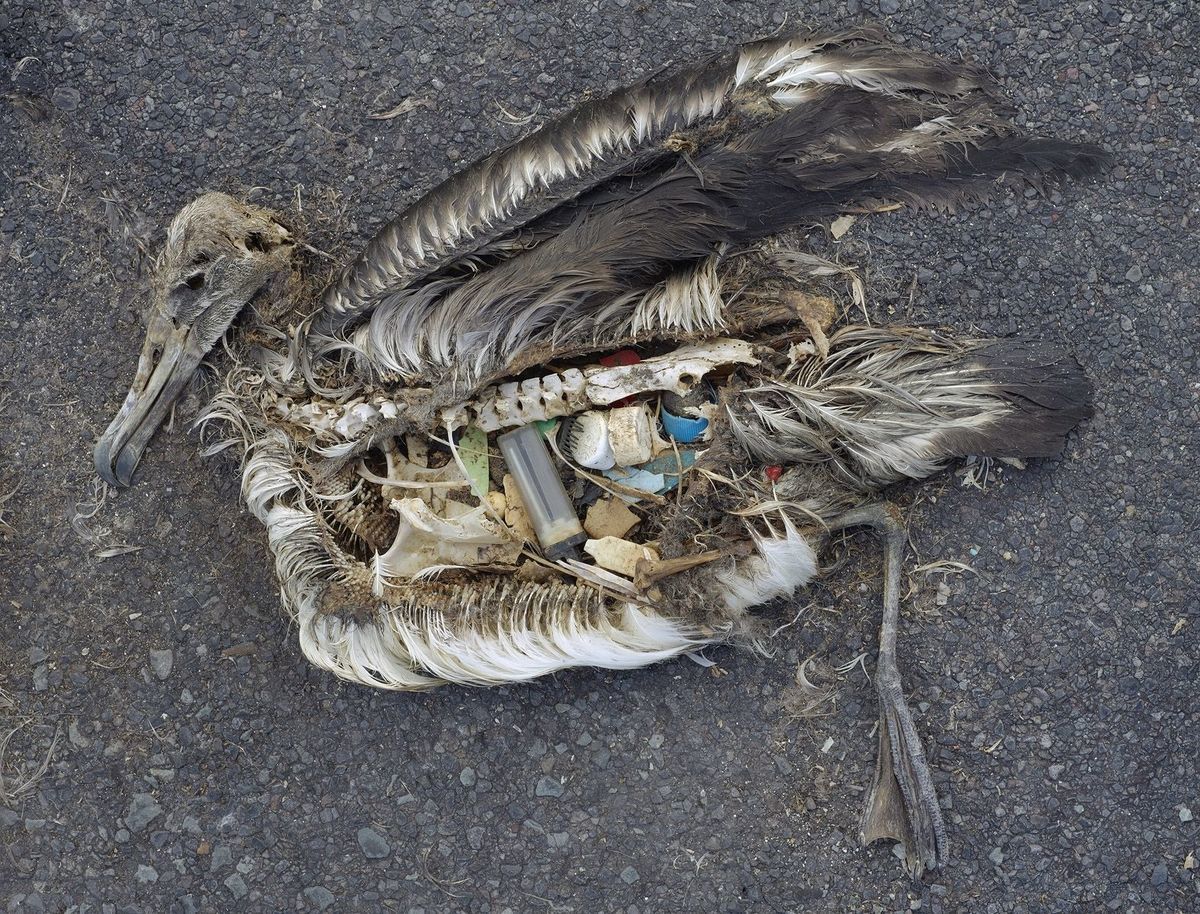 The unaltered stomach contents of a dead albatross chick photographed on Midway Atoll National Wildlife Refuge in the Pacific in September 2009 include plastic marine debris fed the chick by its parents. © Chris Jordan / CC BY 2.0

Whales also eat pieces of plastic. One whale was found washed up dead on a Scottish beach in late 2019 with 100kg of plastic fishing nets and rope, packing straps, carrier bags and plastic cups in its stomach.

And because fishing equipment is designed for actually catching sealife, huge nets and long ropes left discarded in the sea often trap and kill sea creatures. In 2018, around 300 endangered sea turtles were discovered dead, entangled in a ghost fishing net in Mexican waters.

Why do we need to cut single-use plastic as much as possible?

Even if you don’t eat seafood or fish, there are very real concerns that microplastics in the air and water can have profound impacts on human health. In 2016, researchers found that microplastic particles in food can damage organs and leach dangerous hormone-disrupting chemicals, known to affect immune systems, growth and reproduction.

Can we reduce plastic in the ocean?

Yes – mainly by making sure society makes and uses less plastic in the first place. In 2019, Greenpeace supporters showed how people power works by demanding a reduction in single-use plastic packaging in supermarkets, for example, forcing Sainsbury’s to commit to a 50% reduction by 2025.

There’s a long way to go, but continuing to eliminate single-use plastic from your purchases  – and finding ingenious ways to reuse and refill what you do end up purchasing – is a great place to start. Here is a guide with nine ways to reduce your plastic use to get going today.

To avoid contributing to the microplastic pollution from synthetic clothing, choose natural fibres, buy clothes that last, learn how to mend and upcycle, and wash synthetic clothes using a whizzy microplastics guard like the Guppy Bag or Cora Ball.

By cutting out plastics where we can, and pushing the government and plastic-producing businesses to tackle the problem at the source, we can stop plastic pollution from hurting sea creatures and humans alike.