How can we live in harmony with nature? We know that how we’re living now is harming our planet. And that collective change is essential for its future. But with so much to do and bad news nearly everyday, it’s easy for our hope to dash away.

World Environment Day’s #OnlyOneEarth theme highlights how we can live in harmony with nature and transform towards greener lives. Whether using new technologies in the city or adopting sustainable farming practices, people globally are coming up with creative solutions to make the world a better place.

We picked out a few that remind us a greener future is possible. Many of these ideas are still at the experimental stage, and some will be more valuable as conversation-starters than large-scale solutions. But they’re all great reminders of what’s possible when we’re willing to get creative and reimagine the world around us. Because all we need to restore our hope is a jump into our imagination.

Glow in the dark cycle path

In Lidzbark Warmiński in northern Poland, cycling has become a bit safer. This experimental cycle path absorbs sunlight to light up in darkness, making the path safer for cyclists at night. It’s made of blue luminophores, which are small crystal-like particles that can take in energy from the sun then slowly release it as light. It looks similar to a glow-in-the-dark sticker that you can put up on a ceiling. The path is currently being tested for wear and tear. 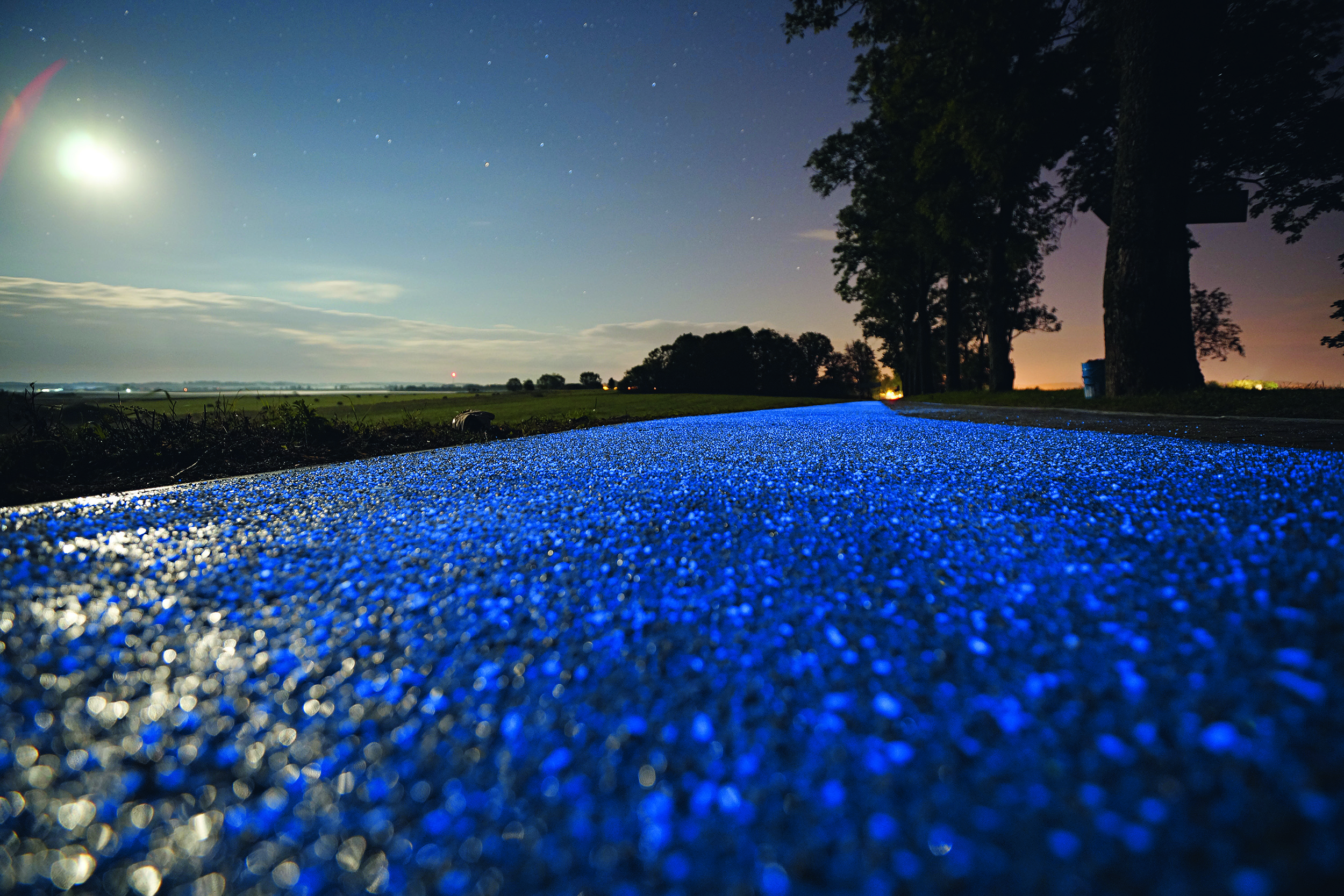 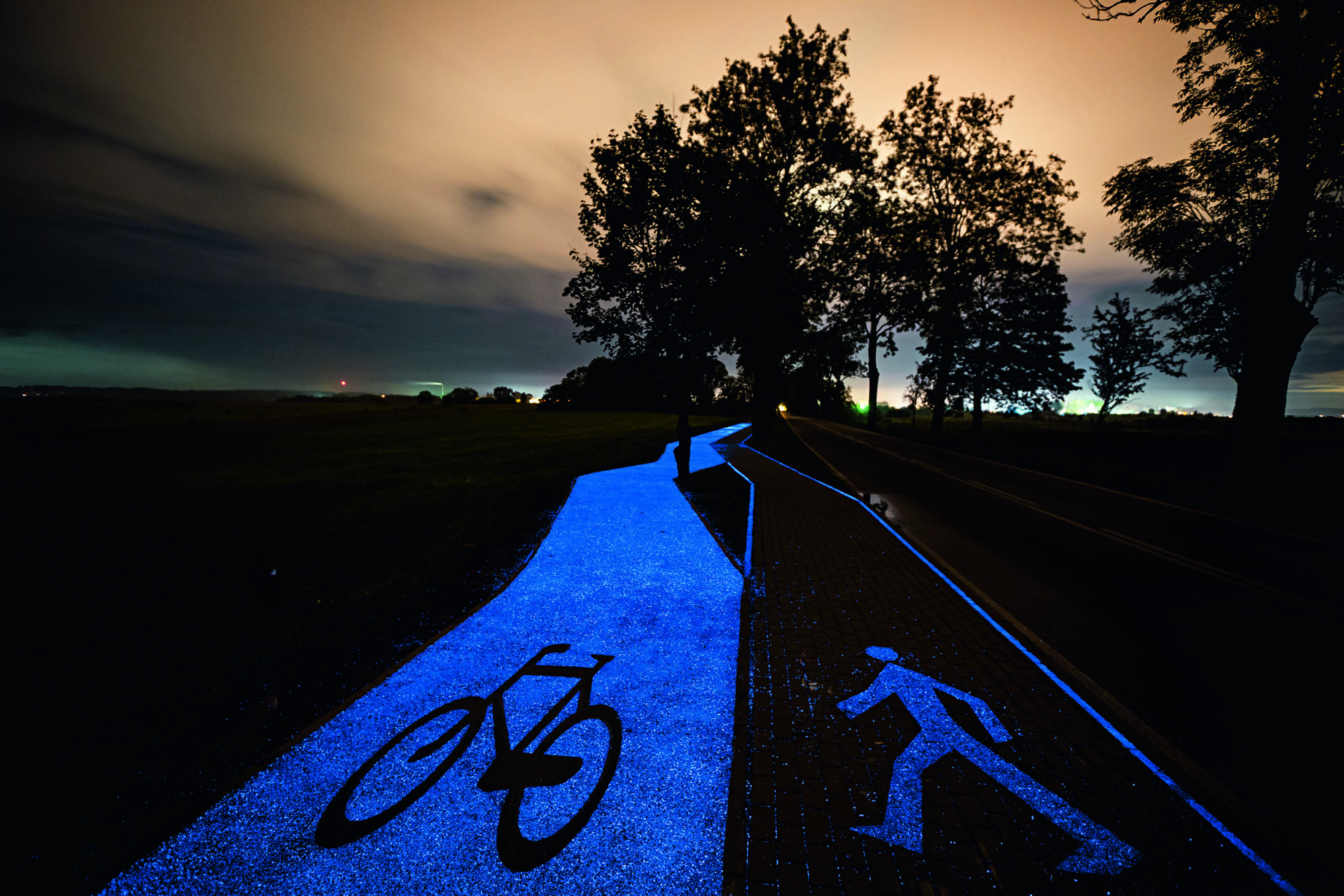 Pedestrians in Washington DC are doing more than just walking. At the Connecticut Avenue Overlook pocket park, they power outdoor street lights. As they walk, special tiles harness the energy generated by their footsteps. The project is a collaboration between the clean-tech British company Pavegen and the D.C. government. 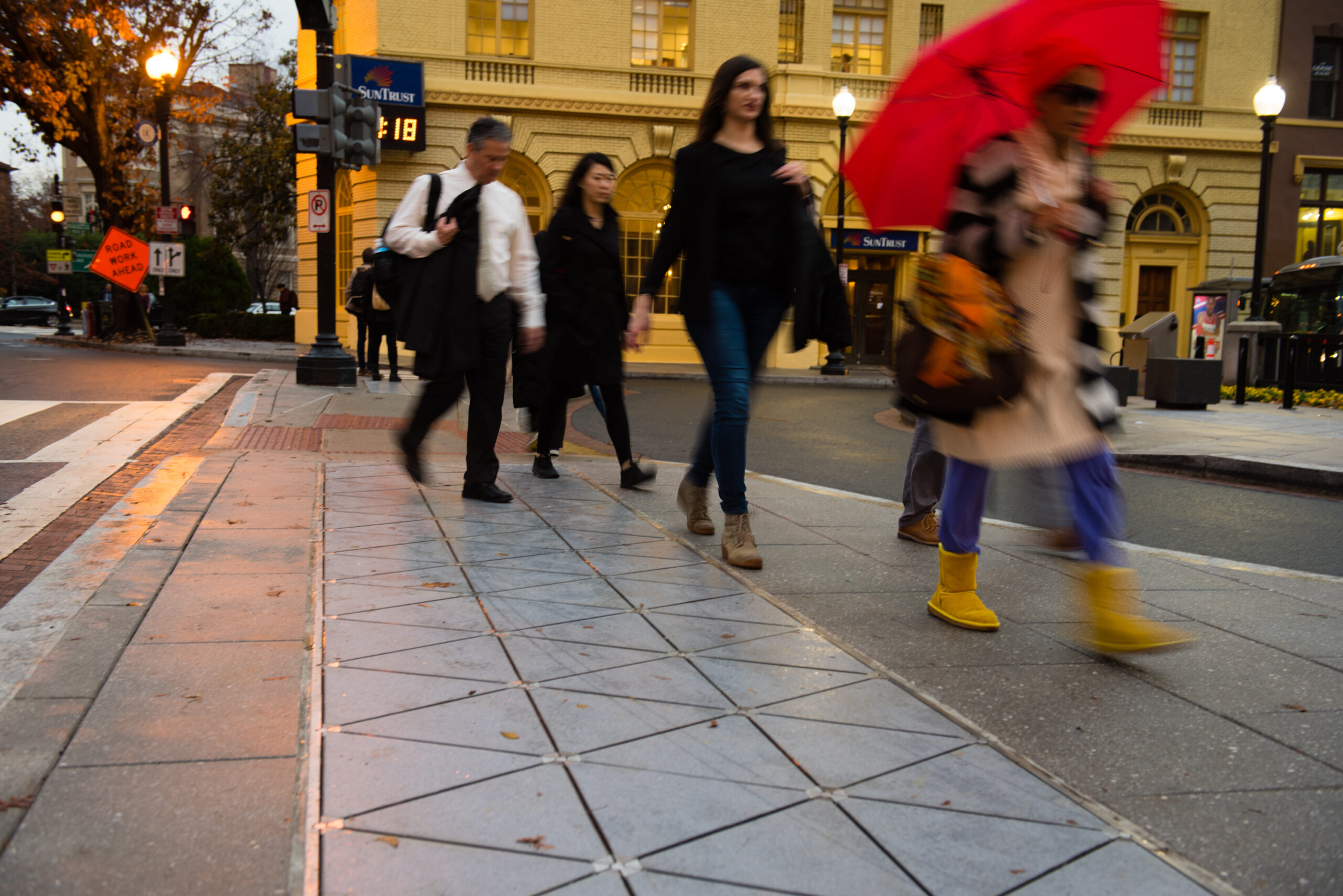 Hamburg houses the first algae-powered building in the world. At the BIQ (Bio Intelligent Quotient) House, the panels in the front are filled with growing algae. The plants are able to generate renewable energy, heat water and help shade the building. 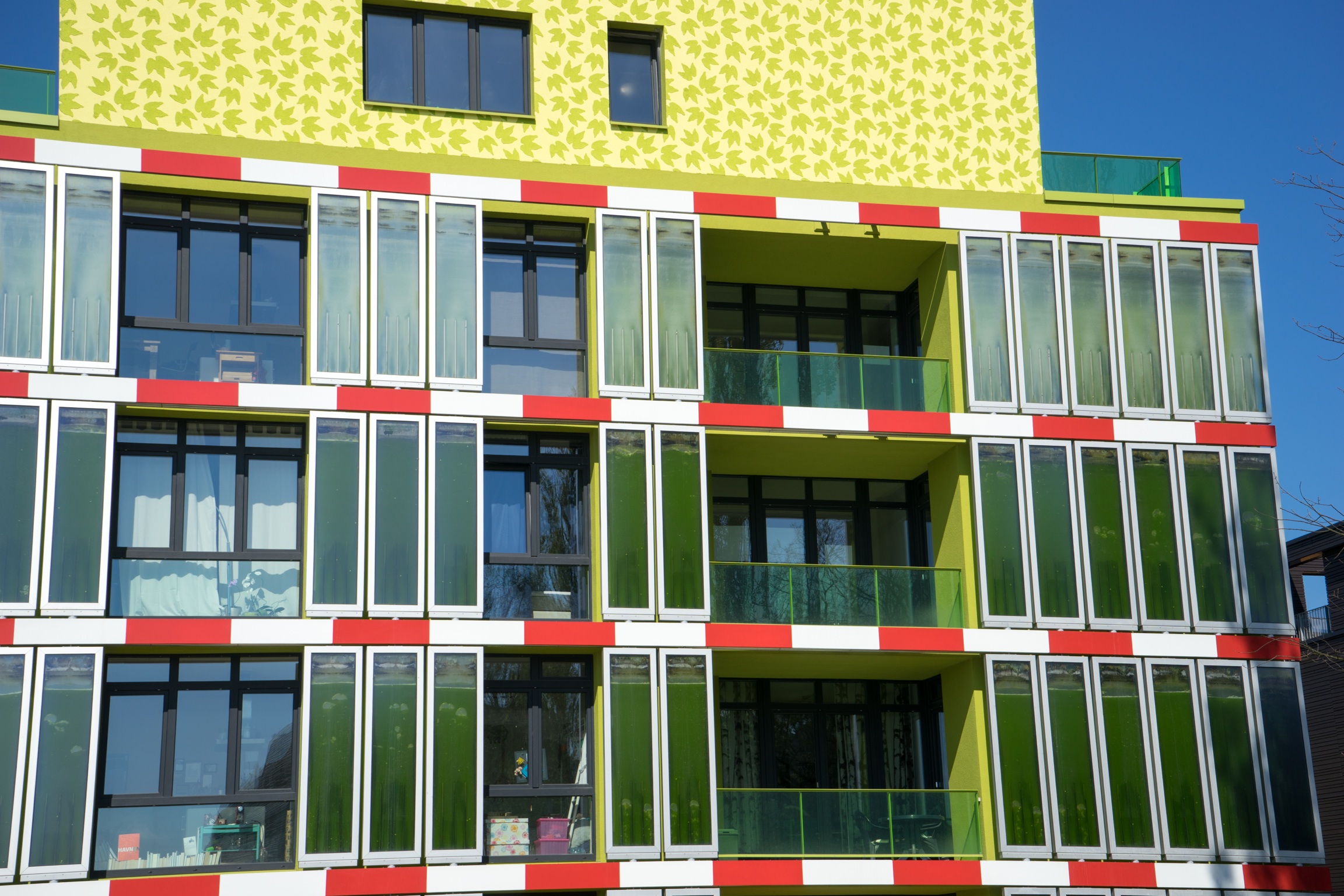 Called Supertrees, these tree-like structures behave as vertical gardens. Designed by Grant Associates, They generate solar power, act as exhaust air towers for nearby conservatories and collect rainwater in Singapore. 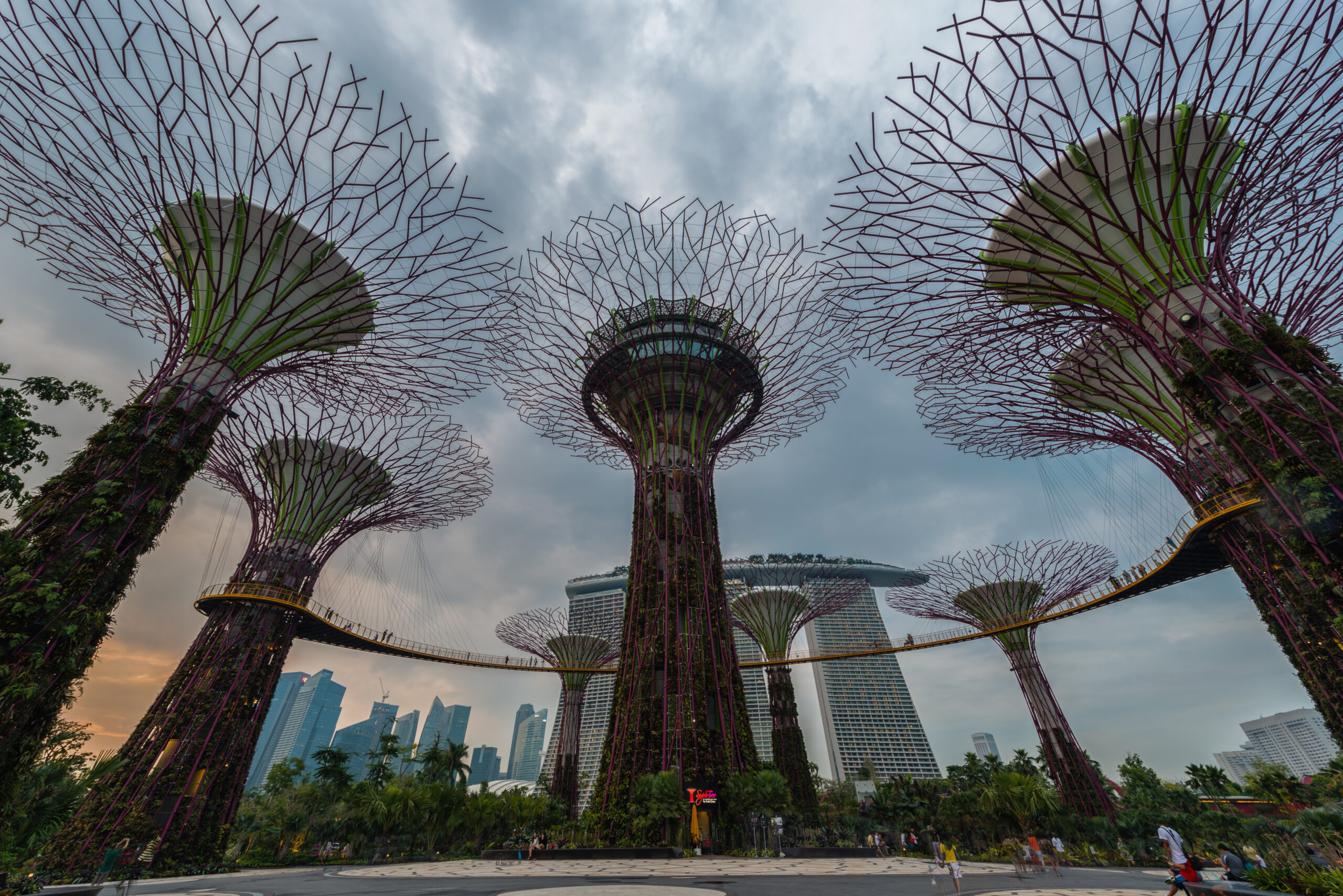 A majestic view of the Super Trees at Gardens by the Bay, Singapore. © Edward Tian / Getty Images

In Tláhuac in Mexico City, Greenpeace Mexico collaborated with Mexican engineers to present an electric pedicab prototype. The batteries of the pedicabs are recharged at a solar station, delivering a zero emissions solution for the local population. 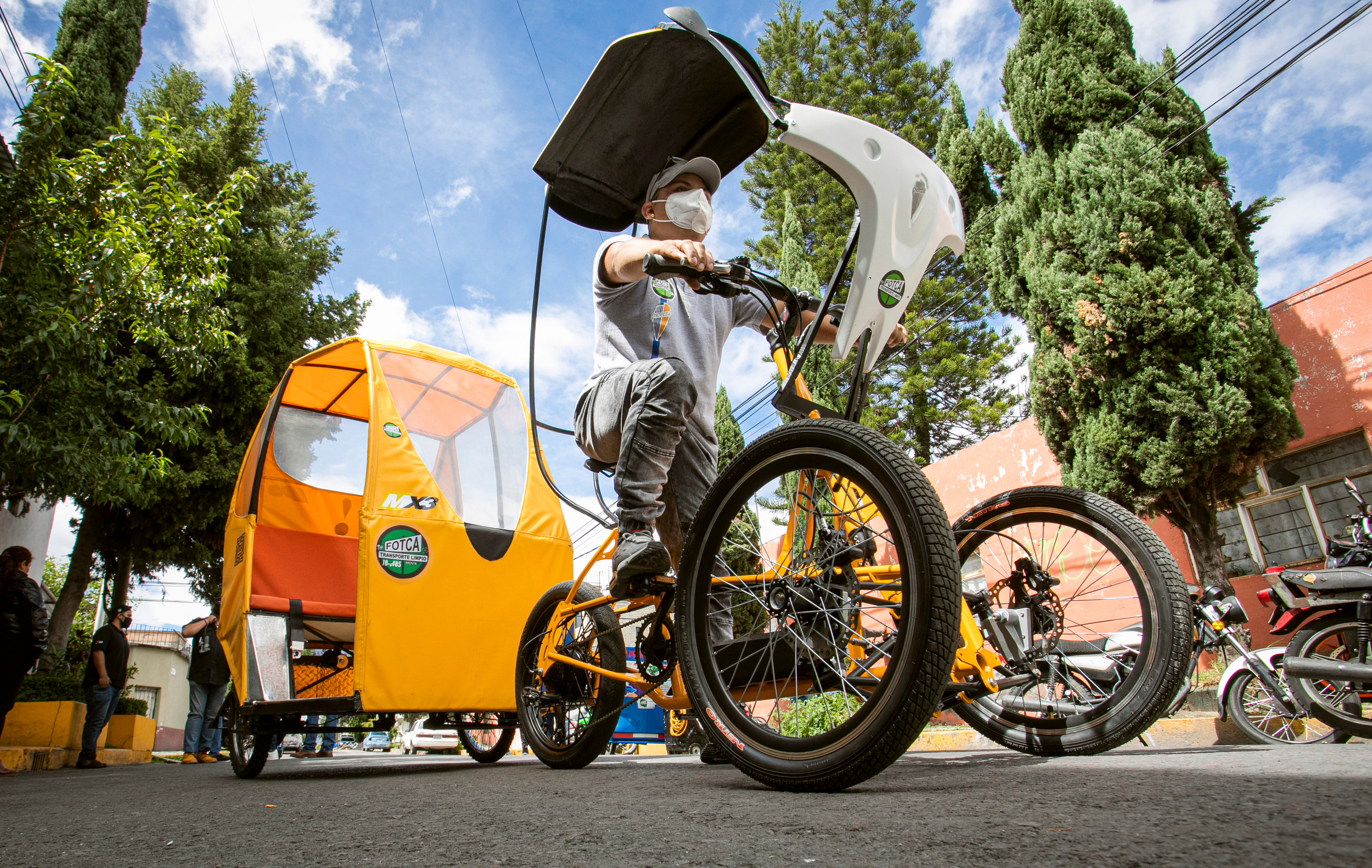 “Wind trees”, micro wind turbines that can work in a city, are a renewable energy innovation. They’re built in the shape of a tree and each of its 72 “leaves” acts as a mini wind-turbine to generate electricity. The trunk and branches are made of steel and the leaves work at speeds as low as 4.5 miles per hour. Although they don’t generate as much power as full-size wind turbines, they’re an eye-catching reminder of the clean energy that’s all around us, just waiting to be harnessed. These wind trees are photographed at Le Bourget, on the outskirts of Paris during COP21. 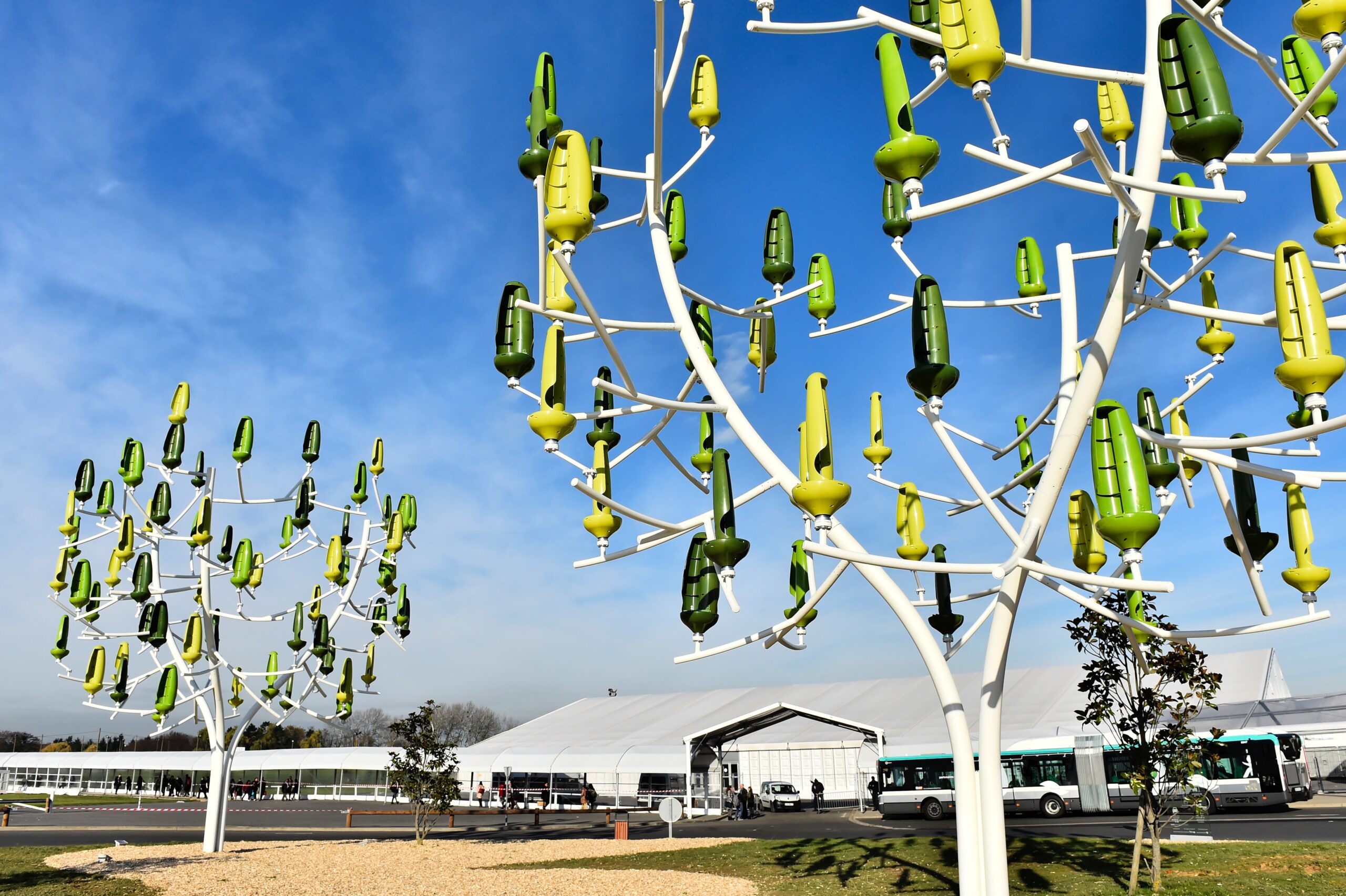 “Wind trees” displayed at Le Bourget, on the outskirts of Paris during COP21. © Loic Venance / AFP via Getty Images

The “Bosco Verticale” (Vertical Forest), is a pair of residential towers designed by Italian architect Stefano Boeri and located in the Porta Nuova district. It is aimed at creating a welcoming habitat for humans and wildlife alike. 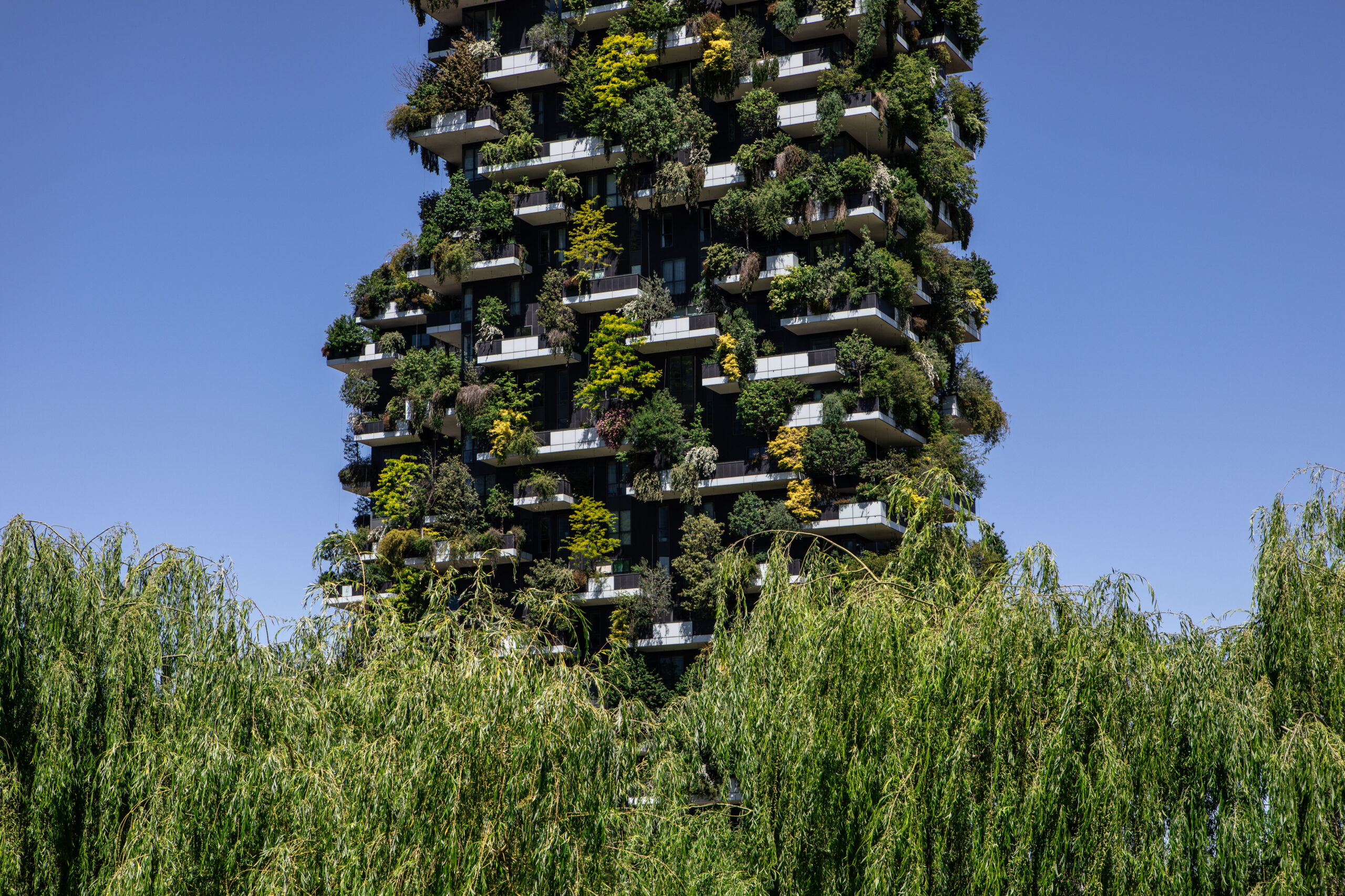 Urban farming is allows the people of Jakarta to grow crops with limited green land available. It gives people space to connect with nature, their local community and grow things in a place they can easily access. 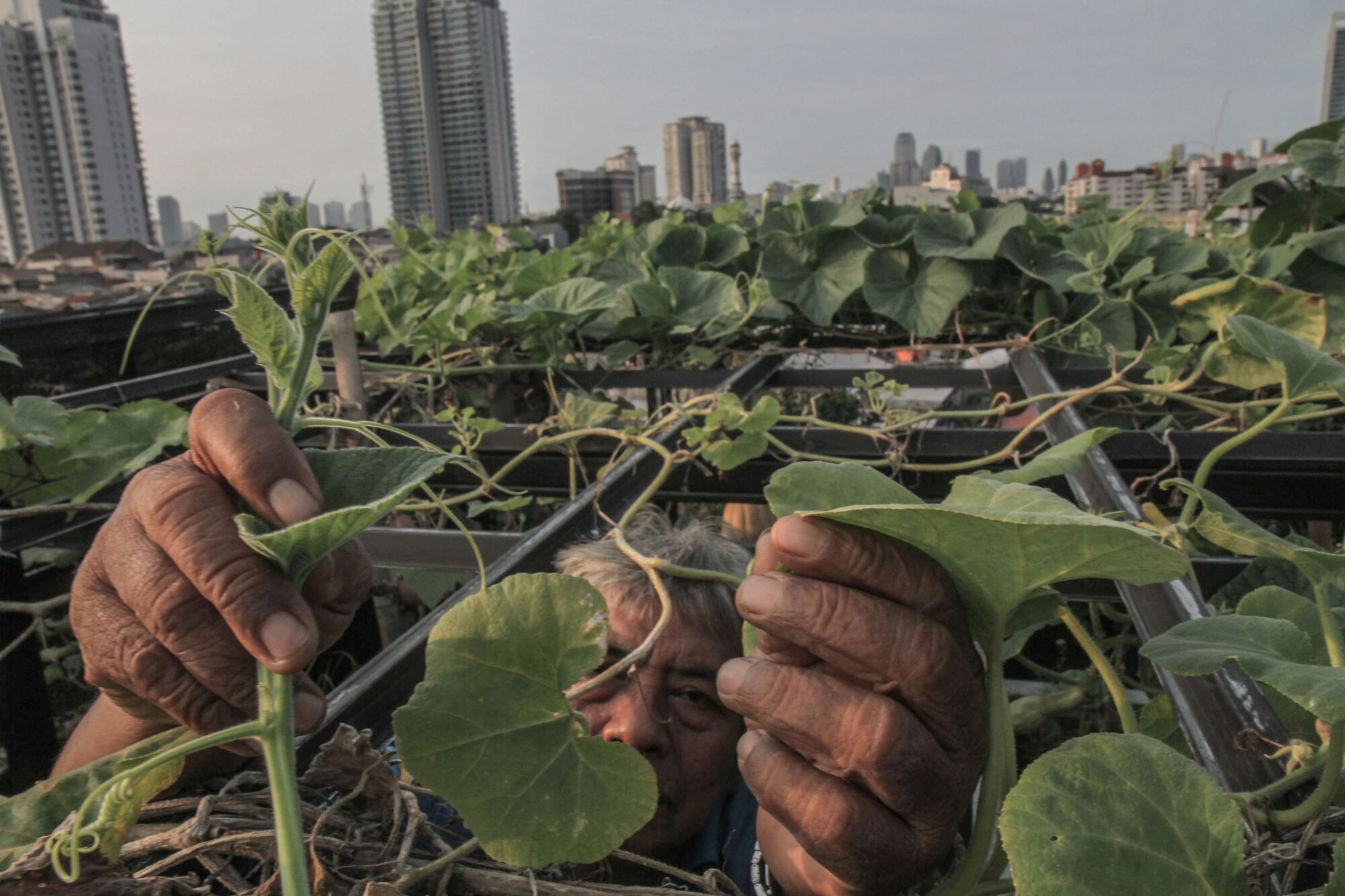 Abdulrahman (60 years) is caring for plants on his roof in Jakarta, Indonesia. © Sijori Images/Future Publishing via Getty Images

This solar-powered bus shelter – also known as a ‘Bee Bus Stop’ – has a roof planted with a mix of wildflowers and sedum plants. These plants are rich in nectar and a favourite of bees and other pollinating insects. They’re installed in many cities across the UK. 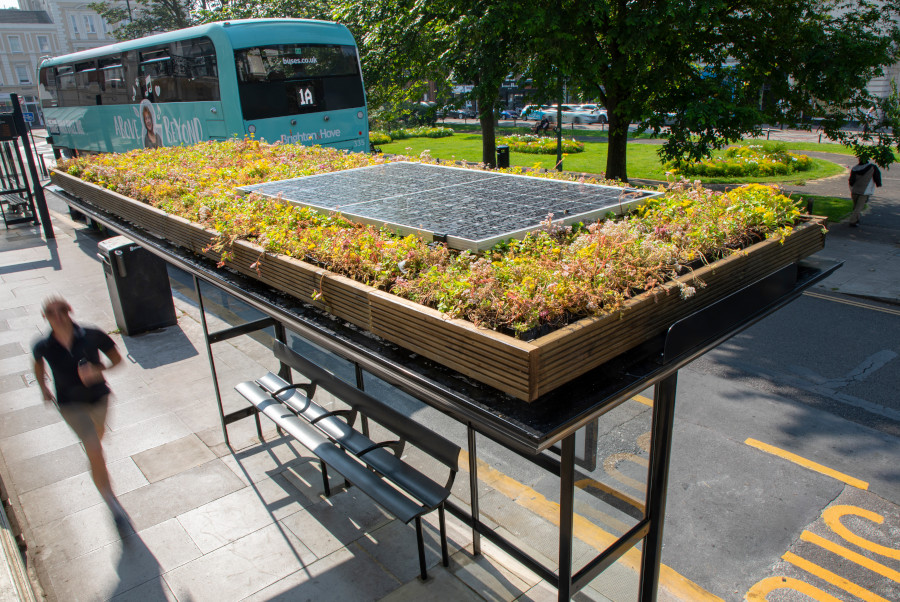 In Khan Kradai Bay in Thailand, the local community agreed to keep a sustainable fishery. To do this, they choose fishing equipment and methods for the type of fish they want to catch. They also set up fish houses to create nurseries for marine animals and won’t fish during breeding season. 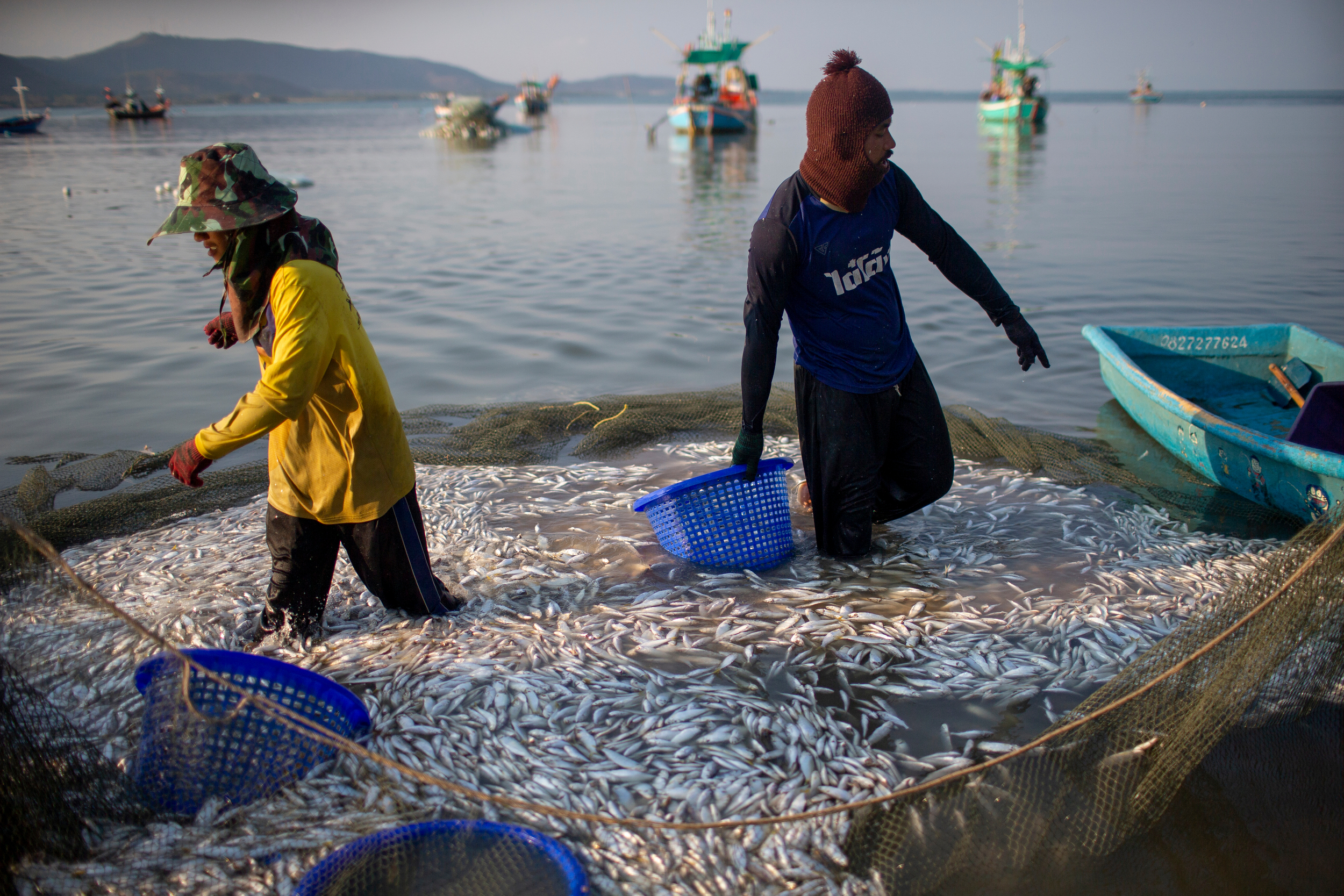 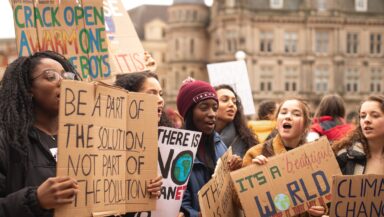 All the bad news about the environment can be overwhelming. But if we work together, we can take on the world’s worst polluters, and solve its biggest problems. This page is full of practical things you can do to help protect the environment, all designed by Greenpeace’s world-class campaign teams for maximum impact.