Mining company Global Sea Mineral Resources’ pilot tests with the nodule collector Patania II have resulted in the loss of control of the 25-tonne robot on the deep seabed, due to breakage of a cable. Operations are being carried out by Normand Energy, the ship chartered by GSR to operate the Patania II. GSR has confirmed that “the connection between the Patania II and the cable has indeed come loose, so that Patania II is currently on the seabed.”

Dr Sandra Schoettner, deep-sea biologist from Greenpeace Germany speaking from on board the Rainbow Warrior in the Pacific Ocean, said:

“It’s ironic that an industry that wants to extract metals from the seabed ends up dropping it down there instead. This glaring operational failure must act as a stark warning that deep sea mining is too big a risk. Losing control of a 25-tonne mining machine at the bottom of the Pacific Ocean should sink the idea of ever mining the deep sea.

“The deep sea mining industry claims it’s ready to go, but investors and governments looking at what happened will only see irresponsible attempts to profit from the seabed spinning out of control. This industry has ‘risk’ written all over it and this is exactly why we need proper protection of the oceans – a Global Ocean Treaty that helps to put huge areas off-limits to industrial activity,” said Schoettner.

This is not the first time GSR’s Patania II has failed during pilot tests. In 2019 the company had to stop the trial of the same prototype nodule collector due to damage caused to the vehicle’s communications and power cable (‘umbilical cable’).

Last week Greenpeace International activists painted “RISK!” across the side of the ship Normand Energy, the ship chartered by GSR to operate the Patania II, to highlight the threat of deep sea mining to the oceans. GSR has been awarded a 75,000 square kilometre exploration contract area – 2.5 times the size of Belgium – to operate in and was scheduled to do another test series in Germany’s contract area.  The tests were supposed to be a significant step for the industry’s planned development. 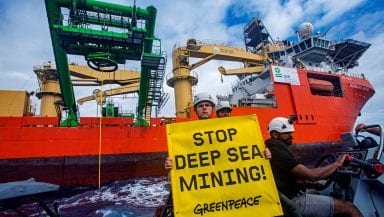 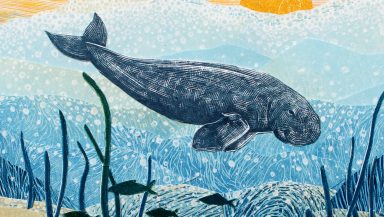