In the wake of international condemnation against the Amazon fires, Brazilian environment minister, Ricardo Salles, set off on a public relations tour of the US and Europe. It’s likely the aim was to greenwash his government’s disastrous environmental record and complicity in the fires.

The tour did not go as planned. Salles was met with protests every step of the way and was caught off guard in a number of interviews.

But who is Ricardo Salles? What is his part in the Bolsonaro government’s assault on the Amazon and Indigenous communities? And just what went wrong on his ill-fated PR tour?

Who is Ricardo Salles?

Brazilian president Jair Bolsonaro ran for election on a hard-right ticket with a promise to open up the Amazon Rainforest to commercial exploitation. Sadly, it’s a promise he’s kept.

To help him with his plans for the Amazon, Bolsonaro appointed Ricardo Salles as his environment minister. The choice of Salles for such a sensitive role was a sign of things to come.

Salles was appointed despite failing in his 2018 bid to get elected to the Brazilian senate. His election campaign was one of the most divisive in the country.

And in December 2018, Salles was found guilty of altering a map to benefit a mining company during his tenure at the São Paulo environment agency. As a result, a Brazilian court banned him from standing for elected office for 3 years.

Just three weeks later, he was the environment minister for the whole of Brazil with responsibility for protecting the Amazon.

Brazilian environmental governance bodies have been dismantled and weakened. Salles has slashed the budget and staffing of the environmental regulatory agency, Ibama. Highly trained units have reportedly been unable to do their work. The value of fines imposed for environmental offences has dropped by 43%.

It’s against a backdrop of the government encouraging deforestation that 2019 has seen a spike in fires in the Amazon – many of them started deliberately to clear land for cattle ranches and growing soya for animal feed. On 10 August, farmers in Pará state organised a “Fire Day”, following which fire hot spots in the area rose around 300% overnight.

French president Emmanuel Macron put the Amazon fires at the top of the agenda for the G7 summit in France at the end of August. And the trade deal between the EU and the Mercosur group of South American countries is now in jeopardy as a result of Brazil’s failure to protect its forests.

Despite Bolsonaro’s protestations at the UN Summit in late September, blaming “media lies” and the “colonial spirit” of criticism from global leaders – the damage to Brazil’s reputation was done.

Salles goes on a PR offensive

With Brazil’s reputation at stake, the government sent Salles on tour to reassure governments and businesses in the US and Europe that Brazil was doing all it could to protect the Amazon – and that the fires were nothing to worry about.

The PR offensive didn’t quite go to plan.

And curiously for an environment minister, Salles also spent a lot of his time meeting with fossil fuel companies and car manufacturers, and even the Competitive Enterprise Institute – a US think tank that denies the dangers of climate change.

Here are some highlights from Salles’ PR-fail tour:

Salles arrives at the US Chamber of Commerce in Washington DC, where he is greeted by protestors from Greenpeace, Code Pink, Amazon Watch and Brazilians for Democracy and Social Justice. 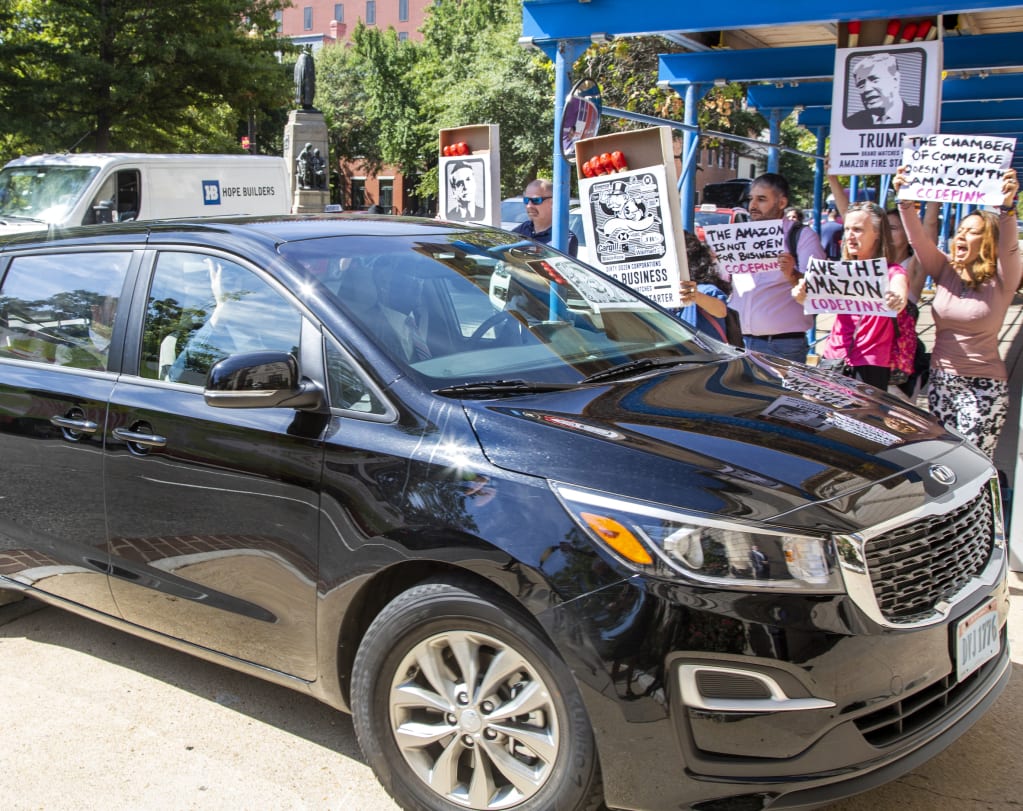 Next stop for Salles was Paris, where Greenpeace activists protested outside the Brazilian ambassador’s residence: 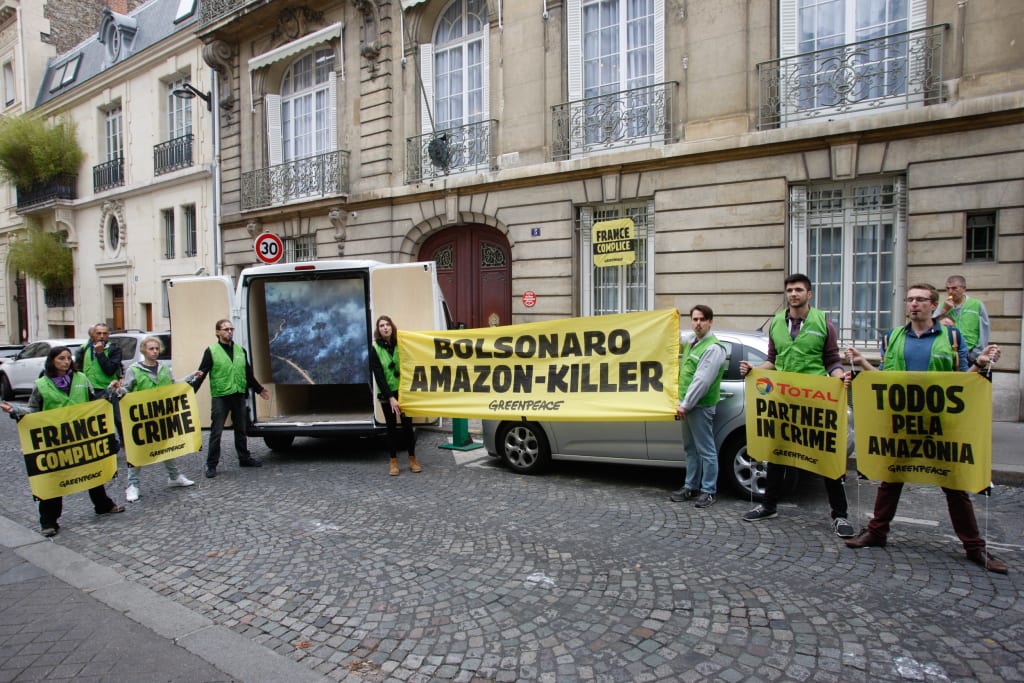 By the time Salles reached Germany, there were protests everywhere he went during his visit. And there was fire. 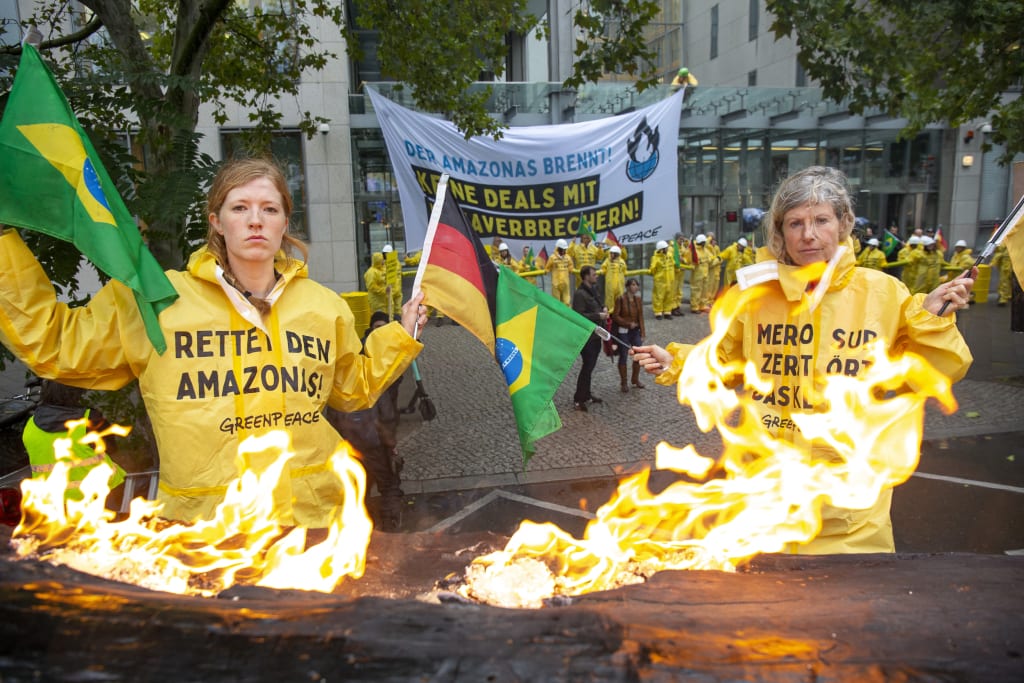 On his final stop, London, protestors from a coalition of groups led by the UK Student Climate Network, which including Survival International, Greenpeace and the Fire Brigades Union, held a demonstration outside the Brazilian Embassy. 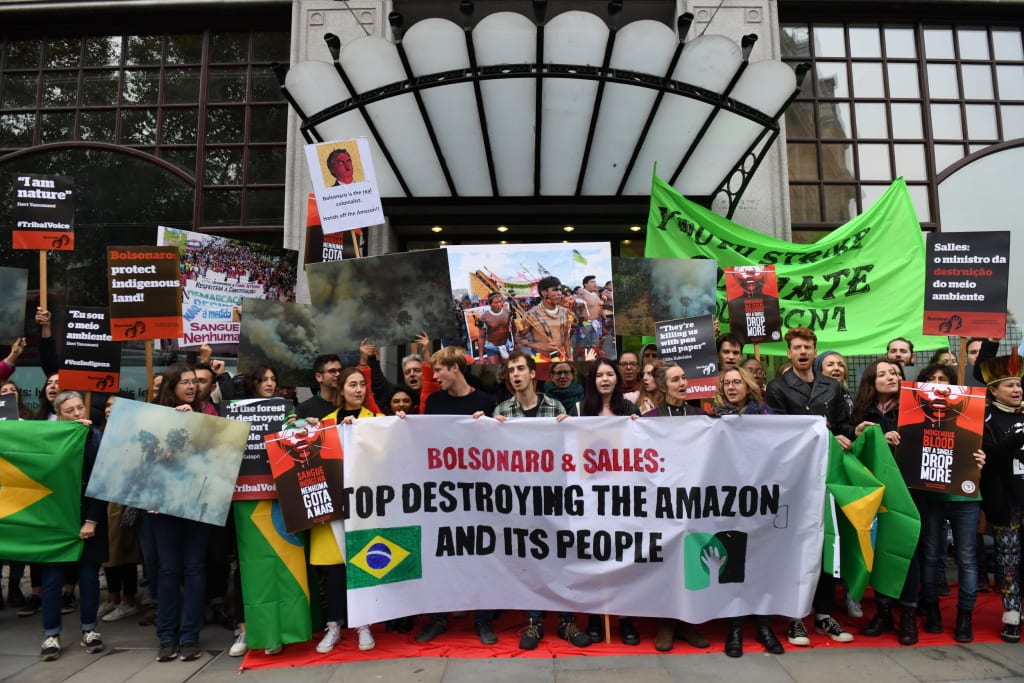 For Black Friday, here’s a breakdown of some of the big deals made at COP26 for the climate and environment. Because there’s no planet BOGOF.