New York, 4 September 2018 – Greenpeace activists flew a giant turtle outside the United Nations HQ in New York this morning, as countries gathered to begin negotiations, for the first time in history, towards a treaty covering all oceans outside of national borders. The large and colourful kite, representing iconic marine life, was flown from a boat on the East River, alongside an aerial banner reading “Global Oceans – Global Treaty!”

The negotiations are the result of a decade-long process and could conclude as early as 2020.

“The fate of our oceans is in the hands of everyone in these negotiations,” said Dr Sandra Schoettner of Greenpeace’s global ocean sanctuaries campaign, speaking from outside the UN. “It’s no exaggeration to say that the governments meeting today are making history as we speak. It is urgent they create a strong ocean treaty which allows us to create a global network of ocean sanctuaries.”

The treaty is crucial because there are no global rules to protect the vast majority of the global oceans – but quite a few to exploit them. As a consequence, the oceans are being pushed to their limits by overfishing, pollution, climate change and other human activity. In the absence of a global treaty, a mere 1% of the global oceans are currently protected.

Dr Schoettner continued: “Oceans beyond borders cover almost half of our planet. They belong to us all, but if we do not act now we will lose vital habitats and species before we even know what we’ve lost. Now world leaders need to show the vision to achieve the scientific imperative of protecting at least 30% of the oceans by 2030. We can only do that with a global ocean treaty which creates real protection for these waters and allows us to create a global network of ocean sanctuaries.”

The boats and kites were operated by activists from Greenpeace Germany.

For images of the flying marine life, see:

For a collection of ocean photography for free use, see:

N.B. Not all of these images are from the high seas; for illustration purposes only.

Greenpeace spokespeople available at the UN in New York during the negotiations: 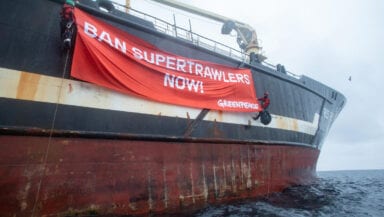 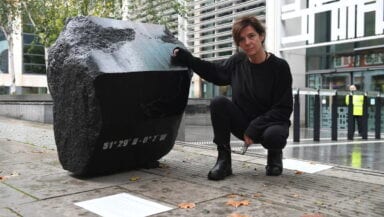 Artist Fiona Banner: ‘Why I delivered a 1.25 ton boulder sculpture to the government’ 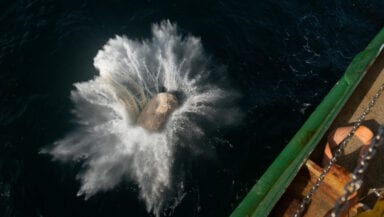