WORKERS across the oil, gas, wind and decommissioning industries strongly support the idea of an “offshore passport” that would allow them to easily transfer their skills and experience between sectors, a survey shows.

Respondents to a poll reported they are currently forced to pay out thousands of pounds of their own money for training courses before being hired, with no guarantee of work, and are routinely having to repeat training they have already done.

These barriers require workers to fork out for training to move to jobs in wind, despite already holding relevant qualifications. Campaigners warn that the government must act to remove these hurdles to ensure the UK delivers on its targets to introduce 40GW of offshore wind by 2030.

Jack*, 39, a father-of-two from Fife, has worked in the industry for 12 years. In the past two years he’s spent £3,000 on training costs with no help from employers. He said: “Shelling out all this money does cause stress, and it does have an impact on your family and your living costs. “There’s lots of people worrying about how they’re going to pay the mortgage. I know people who’ve packed it in altogether because working offshore is just too expensive.

“I have thought about working in renewables, but that’d be thousands of pounds you’d have to pay to work in both industries. It’d just be too much, it costs an absolute fortune just to stay in one sector.”

Alasdair*, aged 60, from the Highlands has 30 years’ experience working offshore as a rigger and scaffolder. “It’s like people are being forced to buy their jobs…It’s a money making racket as far as I’m concerned. Having a system where you don’t have to duplicate training would make much more sense. The training is basically exactly the same for both industries.”

Time for politicians to listen to workers

Ryan Morrison, Just Transition Campaigner at Friends of the Earth Scotland, said: “The skills and experience of offshore workers are vital to enable a rapid shift to renewable energy, but workers cannot be expected to fork out thousands from their own pocket to duplicate qualifications they already have.

“Promises of green jobs mean little when this unregulated training regime holds back the opportunity to move between sectors. It is time for politicians to listen to these workers by creating a regulated offshore training passport to ensure a just transition for offshore workers.” 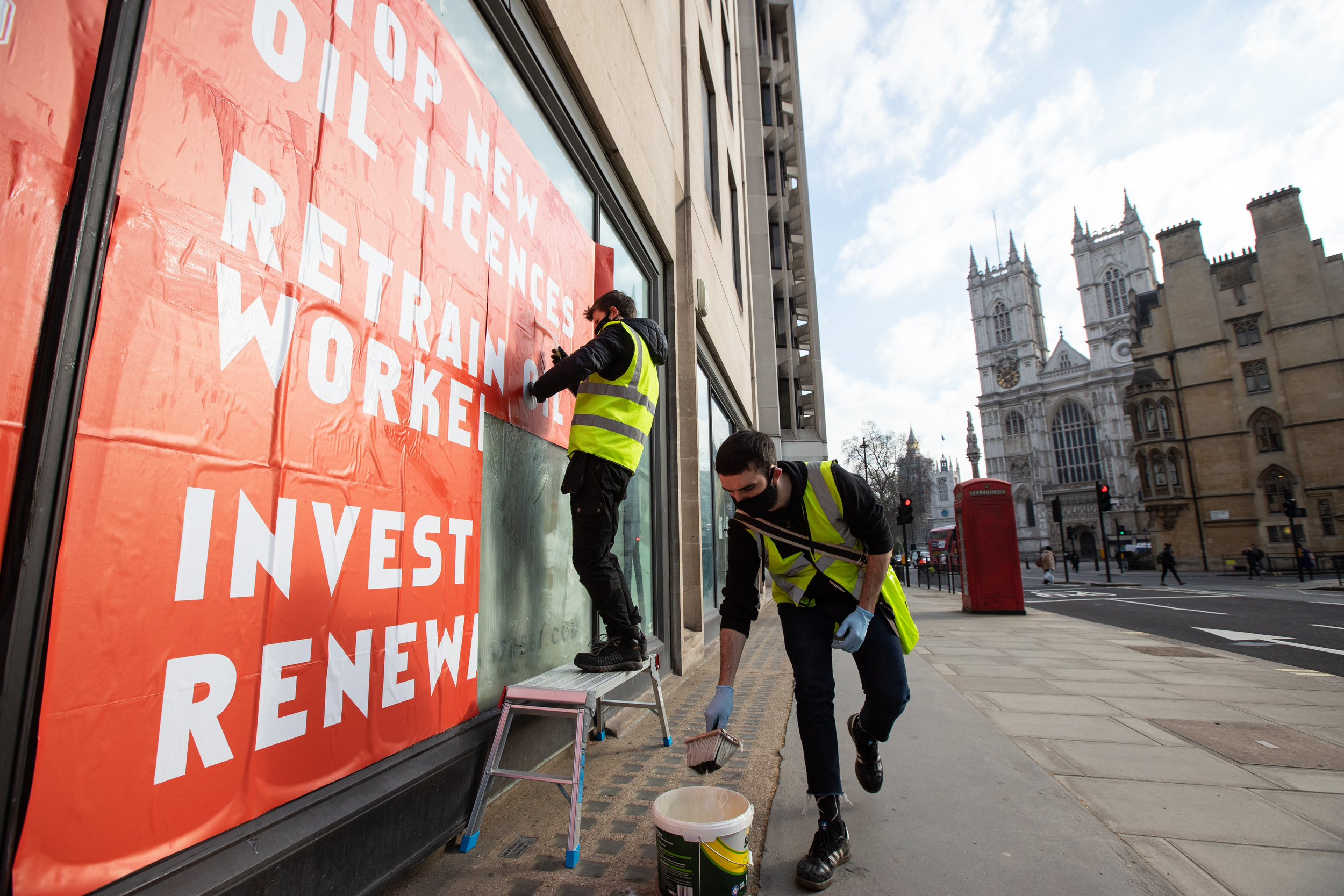 Overwhelming support for an ‘offshore passport’

A survey of more than 600 offshore workers, by Friends of the Earth Scotland, Platform and Greenpeace, supported by RMT and Unite Scotland, found that 94% of workers were in favour of introducing standardised training for working offshore.

Gabrielle Jeliazkov, Just Transition Campaigner for Platform, said: “This unregulated outsourcing of training is a major barrier to a just transition to renewable energy. We know the energy transition will impact thousands of workers and the government needs to make a plan to support them.

“Successive governments have failed to keep the oil sector in check and allowed for the increasing casualisation of the workforce, with costs now borne by individuals rather than employers. Workers are telling us what they need, the government must listen.”

Three quarters of respondents to the survey were contractors, rather than employees, which is indicative of the trend towards offshore work becoming more casualised. Survey findings suggested this is resulting in workers increasingly having to pay for work training out of their own pocket.

Almost two thirds of respondents said employers had paid none of their training costs in the past two years, a rise of 20% compared to pre-2015.

Barriers need to be removed

Trade union RMT welcomed the survey and General Secretary, Mick Lynch said; “As a matter of urgency the ‘Energy’ industry must take control from the countless ‘standards’ bodies that are setting the agenda based on commercial imperatives rather than what the industry and its workforce actually needs.

“This is a classic case of the ‘tail wagging the dog’ and it’s the workers on the frontline picking up the cost of an inefficient, exploitative system which is failing to drive meaningful improvements in health and safety terms or skills.”

John Boland, Regional Officer for Unite the Union, said: “Our members have made it clear to us that training costs and duplication of training are a major issue for them, particularly since the downturn, caused by Covid and the fall in oil and gas prices.

“Many of our members have been made redundant, and are having to pay thousands of pounds to have their training and medical certificates updated, so they can get work.

“Unite have been raising the issues highlighted in this survey, about the barriers for offshore workers transitioning into new renewable jobs, for several years.

“The current situation is that our oil and gas members are going to have to pay for additional duplicated training to work in renewables, like wind, and thus it creates barriers that need to be removed if we are going to see a just transition from oil and gas into renewables.

“All we are being asked for, is the ability for workers to be able to move freely between offshore and onshore energy sectors, standardisation of certification across the energy sector, and the removal of duplication of training.”

Last year the oil and gas sector was hit hard by the dual effects of lockdowns and a crash in demand [1], and in a separate survey 43% of offshore workers said they had been furloughed or made redundant in the first six months of the pandemic [2].

Oil majors such as BP and Shell made thousands of redundancies and acknowledged they anticipated that the pandemic would accelerate government shifts away from fossil fuels in a bid to reach net zero [3].

In March, the UK government’s Department for Business, Energy and Industrial Strategy (BEIS), unveiled its much awaited North Sea Transition Deal which claimed it would “protect jobs in green energy transition” [4].

But while the Deal dishes out significant sums to industry, it offers no immediate benefits for workers, merely promising that industry will create “an integrated people and skills plan” by March 2022 [5]. It makes no mention of recent job losses, or of the trend towards casualised  work having chipped away at workers’ rights over the last several years. The widespread enforced switch to self-employed contracts (known as IR35) since the industry downturn in 2014 has led to a surge in the number of workers with reduced employment support and poorer working conditions. 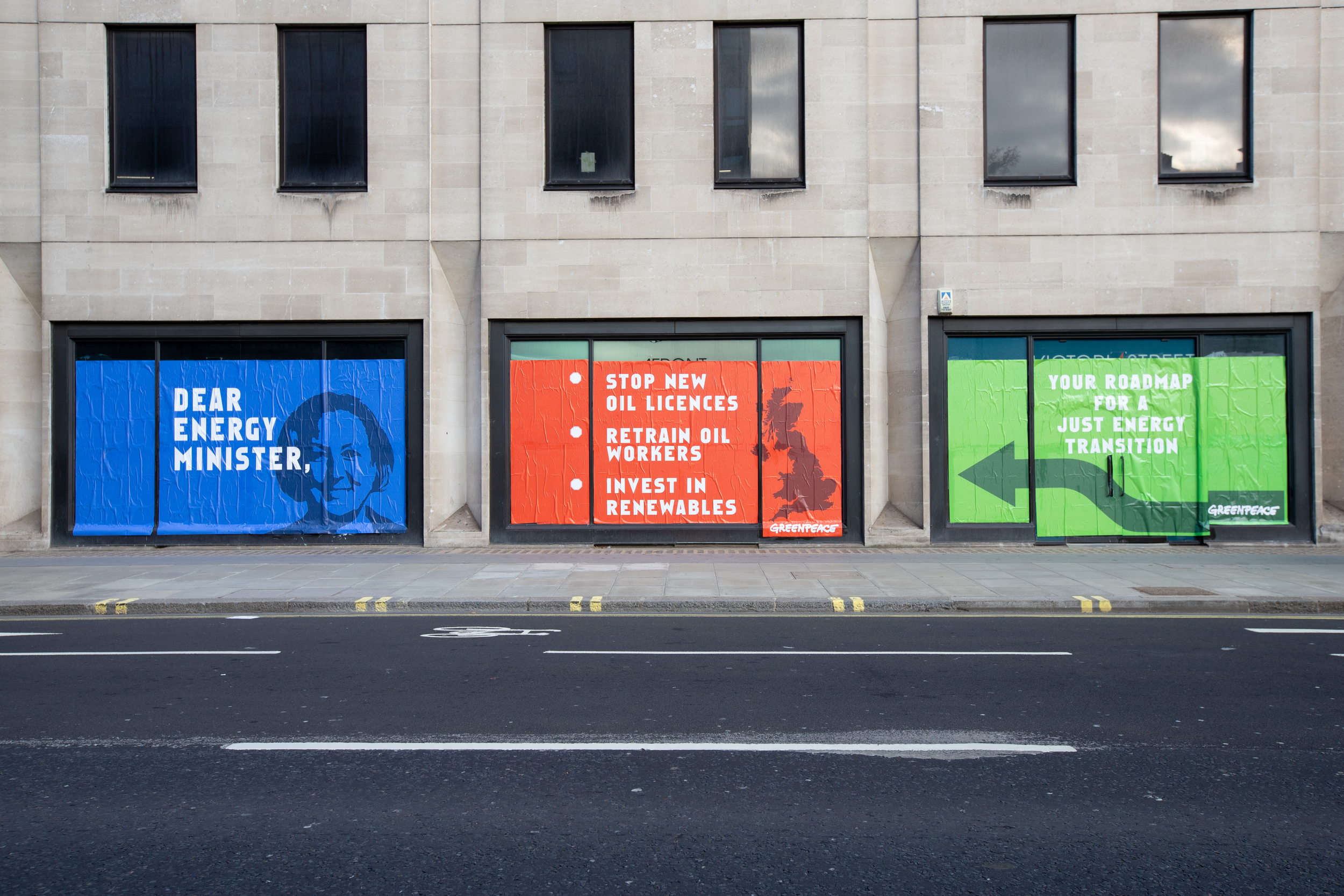 Activists call on the Energy Minister to cancel future oil and gas licences in UK waters.

“But his North Sea Transition Deal will achieve no such transition if workers are unable to move to green jobs.

“We urge politicians to listen to workers, and start by introducing government-regulated offshore passports to help workers smoothly move into the green jobs that the government has promised.”

Campaigners argue that so far no notable steps have been taken by any of the industry or government bodies which might have a role in the energy transition, including the Energy Skills Alliance; The All Energy Apprenticeship; The Green Jobs Taskforce; The Engineering Construction Industry Training Board; nor the training certification bodies themselves: the Offshore Petroleum Industry Training Organisation or the Global Wind Organisation.

And as part of BEIS, campaigners argue that the Oil and Gas Authority has failed to assume a role as regulator of the industry to ensure employment, safety and environmental standards are properly adhered to by operators.

The UK and Scottish Governments must act

Together, Friends of the Earth Scotland, Platform, Greenpeace, RMT and Unite Scotland are calling for:

*Names have been changed to protect anonymity, because workers face being blacklisted by the industry for speaking out.

[2] Offshore: Oil and gas workers’ views on industry conditions and the energy transition, 2020, Friends of the Earth Scotland, Greenpeace, Platform. 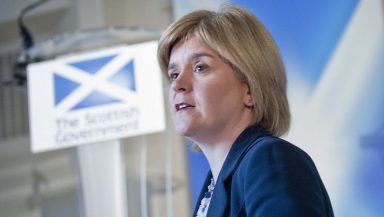