For too long now, the UK government and the big dogs in the oil industry have been getting away with a ‘business as usual’ approach on fossil fuels – extracting as much oil and gas as possible, regardless of the devastating impact on people and the climate. But a recent string of setbacks could force politicians and oil bosses to think again.

The International Energy Agency (IEA) – the most influential energy think tank in the world – has said governments should halt any plans to greenlight more oil and gas; and from the boardroom to the courtroom oil companies are being told that their dubious net zero plans aren’t good enough.

Government told: no new oil, gas or coal after this year if we want to keep global warming under 1.5 degrees.

This year the UK will host global climate talks in Glasgow, known as COP26. The government unit that’s prepping for the conference asked the IEA to publish a report on how the world’s energy mix needs to look if the world is going to reach net zero carbon emissions by 2050.

The answer was definitely not what they expected – or wanted: the IEA was admirably clear: development of new oil and gas projects must end this year and no new coal-fired power stations can be built if we want to keep global heating below 1.5C.

This analysis has made things pretty awkward for the UK government, because their plan is to keep signing off on new oil and gas licences, which will let big fossil fuel companies pump oil and gas from the North Sea for decades to come. These plans get the official thumbs down from the IEA, and it’s not a good look for Boris Johnson, who just last month said world leaders need to “get serious” if we want to stop climate change.

On the same day as the IEA bombshell, Shell’s investors made some noise of their own. Shell held their annual general meeting, where shareholders were given the chance to vote on the oil company’s climate plans.

As you can probably guess, Shell’s climate plans are a joke. Instead of cutting production of oil and gas, they’ve said they want to increase their gas production by 20% in the next 10 years. And in a ridiculous attempt to balance things out, they’re hoping to plant so many trees that they’d probably need to relocate their HQ to a treehouse, instead of doing what they need to do and actually extracting and using less fossil fuels. They also say it’s not their job to fix the climate, but they’ll think about it if their customers make an effort first.

Usually at these meetings, the bosses get overwhelming support for their plans, but this year was a little bit different. Support doubled for a call for an alternative, more ambitious plan, drawn up by activist investors Follow This; while votes backing Shell’s plan dropped by around 10%.

Fast forward one week, and Shell got a dressing down in Dutch courts in a case brought by Friends of the Earth, supported by Greenpeace and many others. Shell, who are based in the Netherlands, were told that their climate plans aren’t sufficiently “concrete” and the court ordered them to cut their emissions by 45% by 2030.

This is a huge moment, because it’s the first time a company has been forced by the courts to align their plans with the Paris agreement, where countries agreed to limit global warming to 1.5C. It means that by law Shell have to change not just their climate plan, but their entire business model.

“This is a huge moment. It means that by law Shell have to change not just their climate plan, but their entire business model. ”

The CEO Ben van Beurden said last year that he doesn’t want people to think of Shell as an oil company, but as a “sophisticated and integrated energy player”. Now a judge is ordering them to be not just sophisticated but a whole lot more ambitious to hit the Paris target. Be careful what you wish for, Ben!

Shell have said they plan to appeal the judgment, but this could take years of legal wrangling, and as some have highlighted – it might make more sense for them to make a proper climate plan instead.

Tough times for Exxon and Chevron too

Also last week, Exxon lost three seats on their board to activist investors that have attacked their strategy, including its shortcomings on climate change. And Chevron shareholders have voted in favour of cutting emissions that result from the fuels Chevron produces – petrol in cars, fuel for planes etc – not just the emissions that come from extracting oil and gas.

Investors and the rest of the business world are waking up to the reality that climate change won’t just hurt a few trees (and billions of people and species worldwide, btw); it will lose them money. And shareholders are increasingly unhappy that, by ignoring the climate crisis, these oil giants are failing to protect their investments – not just in oil but in the entire global economy. If fossil fuel companies prosper in the short term, the longer term impact of global heating on the world’s economy – and all of us – will be catastrophic.

The impact of this realisation for companies like Exxon and Chevron is enormous. These billion-dollar firms have tried to get away with doing next to nothing when it comes to climate. Now activists and shareholders around the world are coming together to demand the same thing. To meet the Paris targets Big Oil will face an existential choice: either become renewable energy companies or cease to exist.

This flurry of dramatic news in the oil world will be hugely significant for the months and years ahead, but it hasn’t come from nowhere. Bit by bit, we’re seeing a broader shift away from fossil fuels.

Last year, BP committed to cutting their production by 40%. There’s devil in the detail, because this pledge does not apply to a big chunk of their business, but it’s still the only commitment yet made by one of the world’s major oil companies to actually cut oil and gas production.

Meanwhile governments in Denmark, Ireland, Spain and France have all said they will stop giving out licences that allow companies to pump out more oil and gas. And in the US, President Biden has said that oil and gas extraction will be suspended on federal lands.

There are encouraging signs of hope that the tide could be turning on oil and gas. But the UK government is falling behind, and are setting themselves up for humiliation if they don’t get their act together before the climate talks in November.

They’ve published a North Sea Transition Deal, which is supposed to help the UK move towards net zero. But there’s not much “transition” in that deal. Ministers plan to keep signing off new oil and gas projects. And they’ve not explained how they’re going to protect the livelihoods of oil and gas workers in the inevitable move to renewables – which will be vital, because we need them to power our green energy sector.

Greenpeace has launched a campaign to call on Boris Johnson to not approve any new oil and gas, and to start supporting workers and communities to transition to renewable energy. Add your name below and share your support.

Tell Boris Johnson: instead of propping up the oil industry, the government should support North Sea rig workers to work in renewable energy and create green energy for everyone in the UK. 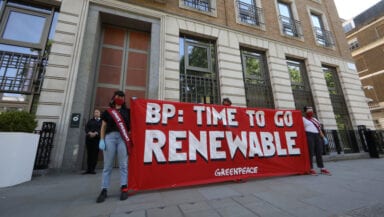 One of the world’s biggest oil companies has promised to produce much less oil. Here’s what you need to know.

BP’s new plan could be a real breakthrough in the fight against the climate crisis. This isn’t the end of the story, but it might be the start of a new chapter. 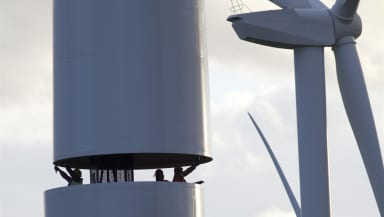 Everything you need to know about one of the greatest challenges facing humanity. 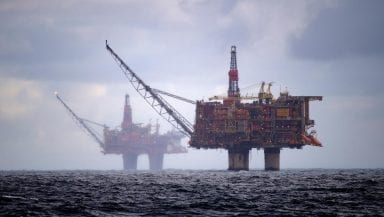 The oil and gas industry is failing its offshore workers. It’s time to give them a way out