Pesticide giants make billions from bee-harming and other hazardous chemicals

The first major analysis of the global trade in highly hazardous pesticides also reveals that chemical giants are selling disproportionately more highly-hazardous products to low- and middle-income countries, where regulations are weaker.

According to the analysis, Bayer, BASF, Syngenta, FMC and Corteva – the biggest five members of the powerful pesticide lobby group Croplife International [3] – made over a third (35%) of their income in 2018 selling pesticides that are known or presumed to cause cancer, threaten fertility, or are decimating insect and aquatic wildlife across the world. This equates to about $4.8 billion of the $13.4bn of pesticide sales data obtained for these companies. 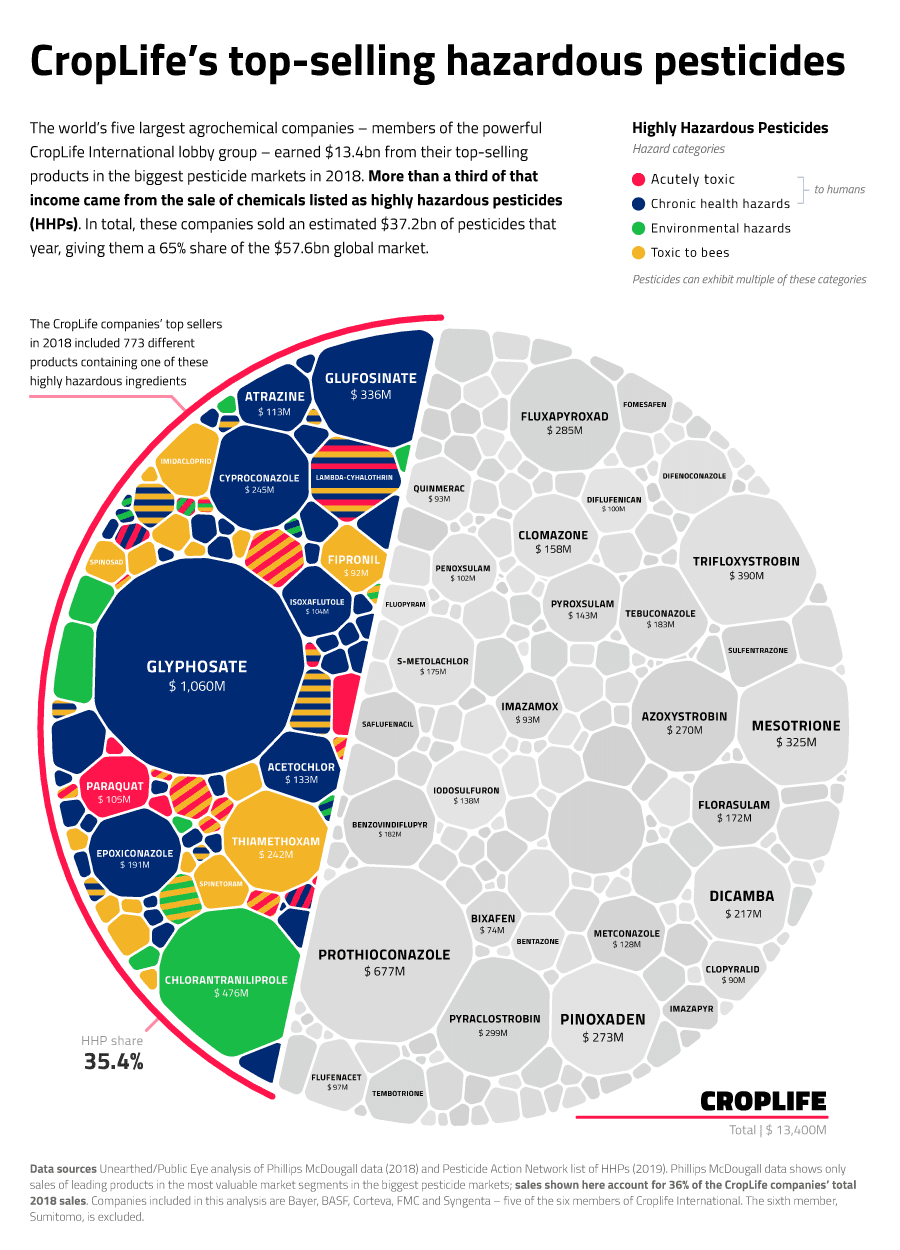 Croplife International has sought to downplay its members’ reliance on the most toxic categories of pesticides, claiming that less than 15% of their ‘crop protection products’ are highly hazardous and that they are ‘innovating to replace highly hazardous pesticides with newer, less toxic products’. [4]

But the analysis by Unearthed and Public Eye of the $13.4bn of sales by the five Croplife companies detailed in the dataset paints a different picture:

“Keeping the world hooked on an industrial farming model based on crops drenched in toxic pesticides is in these companies’ interests. But this destructive agricultural system is wiping out forests, decimating bees and other pollinators, and contaminating rivers and soils.

“Many of these pesticides are so toxic that the UK and the EU have banned them, but the industry has found new markets in countries with weaker regulations, especially in the Global South.

“Starving nature, the life support on which we all ultimately depend, to feed ourselves makes no sense. These dangerous chemicals have no place in a healthy food system and governments must ban them worldwide.”

“This investigation exposes the leading role that Croplife companies play in selling some of agriculture’s most dangerous and controversial chemicals and contradicts their claims that such pesticides are mostly sold by local and generic producers.”

“The leading pesticide manufacturers pretend to be at the forefront of the transition towards more sustainable agriculture. But this research reveals that selling highly hazardous pesticides is at the core of their business model.

“If these chemical giants are serious about sustainability and social responsibility, they must stop exposing millions of people, especially in low- and middle-income countries, to highly toxic pesticides having underestimated negative health effects.“

“As those companies have shown no willingness to act voluntarily, Switzerland, Germany and the USA – as their host countries – need to implement binding rules to ensure they respect human rights and the environment when operating abroad, and support international action to phase out highly hazardous pesticides globally.”

Brazil’s vast agribusinesses – dedicated to monoculture soya, cotton and sugarcane – have made it the world’s biggest market for hazardous pesticides. The analysis shows that more than half of all bee-harming pesticides sold by the Croplife companies were sold in Brazil. And more than half of the Brazil sales of bee toxic pesticides were for soybeans alone.

Last year, it was reported that 500 million bees died in the space of just three months. This mass die-off was blamed directly on pesticides following a decision by the Brazilian president, Jair Bolsonaro, to lift restrictions on a wide range of toxic pesticides.

Likewise, more than half of the Croplife sales in the dataset of HHPs that are classified as acutely toxic to humans were sold in Brazil. Well over half of those Brazil sales (63%) went on soyabeans, for the huge global animal feed market.

Overall, $2.9bn of the Croplife sales recorded in the Phillips McDougall dataset were in the US (although the five companies’ real sales in the country were probably well in excess of $7bn). 36% of the Croplife top five’s US sales were HHPs. The group sells 30 different HHPs in the US, including many – like Atrazine, Acetochlor, Paraquat – that have long been banned in the home countries of the European companies that are selling them.

But by far Croplife’s biggest seller in the US – of any kind – is Glyphosate. Glyphosate alone represents around 15% of Croplife US sales in the Phillips McDougall data, but for Bayer – which took over Monsanto, the US-based manufacturer of Glyphosate-based weedkiller Roundup – the proportion is much greater. Close to 40% of Bayer’s sales to US farmers in 2018 were for Glyphosate.

[1] The Phillips McDougall market research dataset covers around 40% of the $57.6bn global market for agricultural pesticides sales in the 43 countries that represent the biggest markets for agrichemicals. Within each country the market researchers identify the most valuable “market segments” (broken down by “sector” of the market – herbicide, fungicide, or insecticide – and crop) and then attempt to collect full sales data for the leading products in those segments. It can therefore be understood as the most comprehensive guide to whom is selling the most popular products used in the most important markets, what is being spent on those products, and what chemicals they contain.

[2] Chemicals are only included on the PAN list if they are classified by a recognised authority as presenting at least one of three types of hazard: acute toxicity to humans, long-term health effects, and environmental toxicity. The PAN list was last updated in 2019 and includes 310 active ingredients.

[3] Sumitomo Chemical is also under the Croplife umbrella but is the eighth biggest agrochemical company. Unearthed and Public Eye excluded Sumitomo from their analysis because they judged the data sample of the company’s sales to be too small to be representative. For all the other Croplife Companies, the AgrAspire data represents between 23% and 48% of full global sales – for Sumitomo it represents just 4%. 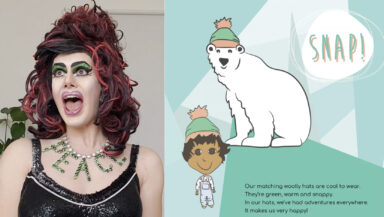 Aida H Dee The Storytime Drag Queen reads 'The Hat that Saved the World' - an environmental story for young children.