NGOs Mighty Earth and Greenpeace UK have joined forces in a campaign against Tesco urging the retailer to cut ties with supplier companies that are driving the destruction of Brazil’s Amazon and Cerrado.

An overwhelming majority of Tesco customers in the UK (88%) agree that supermarkets should not do business with companies that are driving the destruction of forests in Brazil, a new YouGov poll conducted for Mighty Earth shows [1].

Despite this, the supermarket giant keeps sourcing from the companies most responsible for driving deforestation in Brazil – including subsidiaries of JBS, the world’s largest beef company, and Cargill and Bunge, the two biggest soy traders globally – which manufacture animal feed ingredients.

New data from Mighty Earth’s Soy and Cattle Deforestation Tracker, published today, finds twice as much deforestation in the supply chains of these soy traders and meatpackers in the past year compared to the year before [2].

The monitoring covers the period March 2019-March 2021 and shows that the two largest European importers of soy, Bunge and Cargill, are the worst performing soy traders. Cargill is linked to more than 66,000 hectares of clearance, while Bunge is connected to almost 60,000 hectares of deforestation in just two years – an area larger than the New Forest.

Despite this spiral of deforestation, in only one case has a company ever cut ties with a supplier found to have cleared land, out of the 235 recorded and reported by Mighty Earth’s Deforestation Tracker.

The worsening trend in deforestation driven by soy and meat traders correlates with the overall increase in forest loss in Brazil. Last year, deforestation in Brazil was greater than the next six countries combined, according to data from the University of Maryland and the digital monitoring platform Global Forest Watch [3].

Industrial meat production includes wiping out forests to raise cattle and to grow soy to feed chickens and pigs. Soy and beef are two of the three commodities imported into the EU that caused the most deforestation between 2005 and 2017.

“Forest destruction in Brazil driven by supermarket meat is getting worse every year. This is accelerating climate change and wiping out the home of the jaguar. Tesco customers are crystal clear, they do not want their supermarket to do business with the companies involved in this destruction. It’s high time Tesco listens to its customers and drop the worst performing companies driving the destruction of Brazilian forests – JBS, Cargill and Bunge.”

Tesco PLC is the largest supermarket in the UK holding some 27% of the market in March 2021. In the face of the Coronavirus pandemic, the company increased group sales by 7.1% to over £53.4 billion from 2020-2021. Operating profits in the UK and the Republic of Ireland increased by 11.4% over the same period. [4]

In October 2020, Tesco led an industry initiative of 160 of the world’s leading food companies calling on companies in Brazil to end the association between soy and deforestation in the Cerrado Savannah. Despite threatening commercial consequences in the face of non-compliance from large Brazilian traders, Tesco has, so far – failed to act.

“By buying from companies involved in deforestation, Tesco is driving destruction of our natural world. Forests are our life support system. Without them, the risk of future pandemics will soar, precious wildlife will be lost forever, communities and Indigenous Peoples will lose their homes and livelihoods and the climate crisis will continue to accelerate.

“By ignoring the problem, Tesco itself is playing with fire. Its customers are watching and unless it takes meaningful action to ensure its suppliers have deforestation-free supply chains they will begin to turn away.”

Other supermarkets and fast-food companies in the UK are also guilty of selling industrial meat that is feeding deforestation – including Sainsbury’s, Morrisons, ASDA, Aldi and Lidl. But as the biggest food retailer headquartered in the UK and a perceived global leader on these issues, Tesco has a responsibility to lead the way.

Every year, between June and September, the world’s biggest soy traders such as Cargill and Bunge sit down with soy producers in Brazil to negotiate purchase contracts for the coming year. This is the time of the year when businesses agree contractual requirements such as a clause not to purchase soy grown on land deforested after 2020, also known as cut-off date.

Agriculture is the main driver of deforestation worldwide. 80% of global forest loss is due to converting forests to farmland to produce agricultural commodities, such as beef, soy and palm oil [6]. 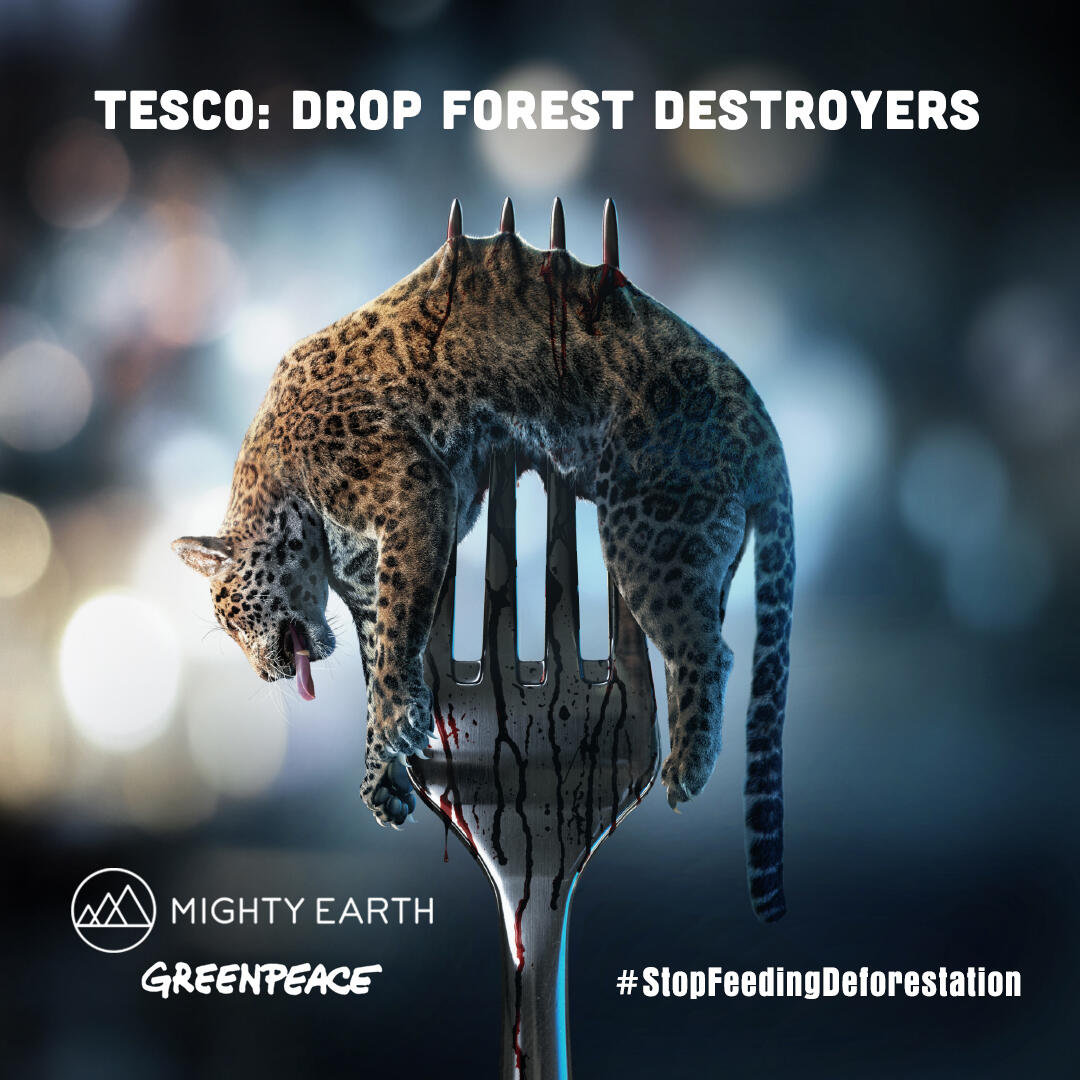 Notes to the Editor:

[1] YouGov poll results based on a UK sample of 2093, with 835 respondents indicating that they are Tesco shoppers. Research undertaken from March 5-9 2021.

Lack of trust in UK supermarkets when it comes to deforestation:

Overwhelming sentiment that supermarkets should not do business with companies that are driving the destruction of forests in Brazil:

[2] Each month, Mighty Earth and research organization Aidenvironment use satellite-based deforestation alerts from Brazilian government agencies, property imagery, investigations by the local team and engagement with the companies to establish the links between soy traders, beef processors and forest destruction in Brazil. Mighty Earth’s Soy & Cattle Deforestation Tracker connects instances of large-scale land clearance in the Amazon and Cerrado to soy traders and meatpackers. It does not capture all deforestation in Brazil, which is many times larger. The full dataset and methodology are available at https://www.mightyearth.org/soy-and-cattle-tracker/

[3] Global Deforestation Rates & Statistics by Country | GFW (globalforestwatch.org). According to Brazil’s space agency (INPE) deforestation of the Amazon rainforest in the country has surged to a 12-year high.

[6] According to Mighty Earth’s Soy and Cattle Deforestation Tracker published today, Bunge and Cargill are the worst performing soy traders assessed, despite their recent sustainability reports touting their nearly deforestation-free supply chains. Cargill is linked to more than 66,000 hectares of clearance – the largest amount out of any other soy trader. Meanwhile, Bunge is linked to almost 60,000 hectares of clearance, of which more than a third took place in protected areas. More on https://www.mightyearth.org/soy-and-cattle-tracker/

[7] FERN, ‘What are the Causes of Deforestation?’
https://www.fern.org/publications-insight/what-are-the-causes-of-deforestation-1975/