Supermarkets putting more plastic on their shelves than ever

Public concern about plastic pollution is at a high, and promises to tackle the problem are pouring out of supermarket PR machines. But new research shows that the plastic footprint of the top 10 UK supermarkets has actually increased over the past year. Here’s the breakdown.

The past few years have been a turning point for our oceans. Viral footage of beached whales with plastic in their stomachs, turtles with straws jammed up their noses, and crabs stuck in plastic cups have travelled the world.

We’re all waking up to the damage plastic is having on our environment. As a result, a wave of public outrage led to a host of commitments and pledges from supermarkets to reduce plastic.

But how much was actually done? Greenpeace UK and the Environmental Investigation Agency investigated their commitments, and how their promises on plastic measured up to actual achievements.

The results are shocking. Supermarkets now put over 900,000 tonnes of plastic packaging on their shelves a year. Like most plastic, it finds its way into our oceans or goes into landfill.

Last year Greenpeace published its first league table ranking UK supermarkets’ plastic footprint. In this year’s updated league table there have been some shifts in the ranking, some backtracking, and – more hopefully –some breakthroughs.

The big news is that supermarkets put even more plastic than ever before on their shelves this year. Seven of the 10 supermarkets ranked increased their plastic footprint. All of this at a time when over 1.5 million people have called on them to make dramatic reductions!

There are no real winners or losers in our league table – across the board we are seeing far too much single-use plastic hitting the shelves. This is plastic that customers have overwhelmingly said “no thanks” to – sometimes literally, by leaving it at the tills.

The bottom performers are yet to embrace refillable and reusable packing at scale and grew their overall plastic footprint from the year before. 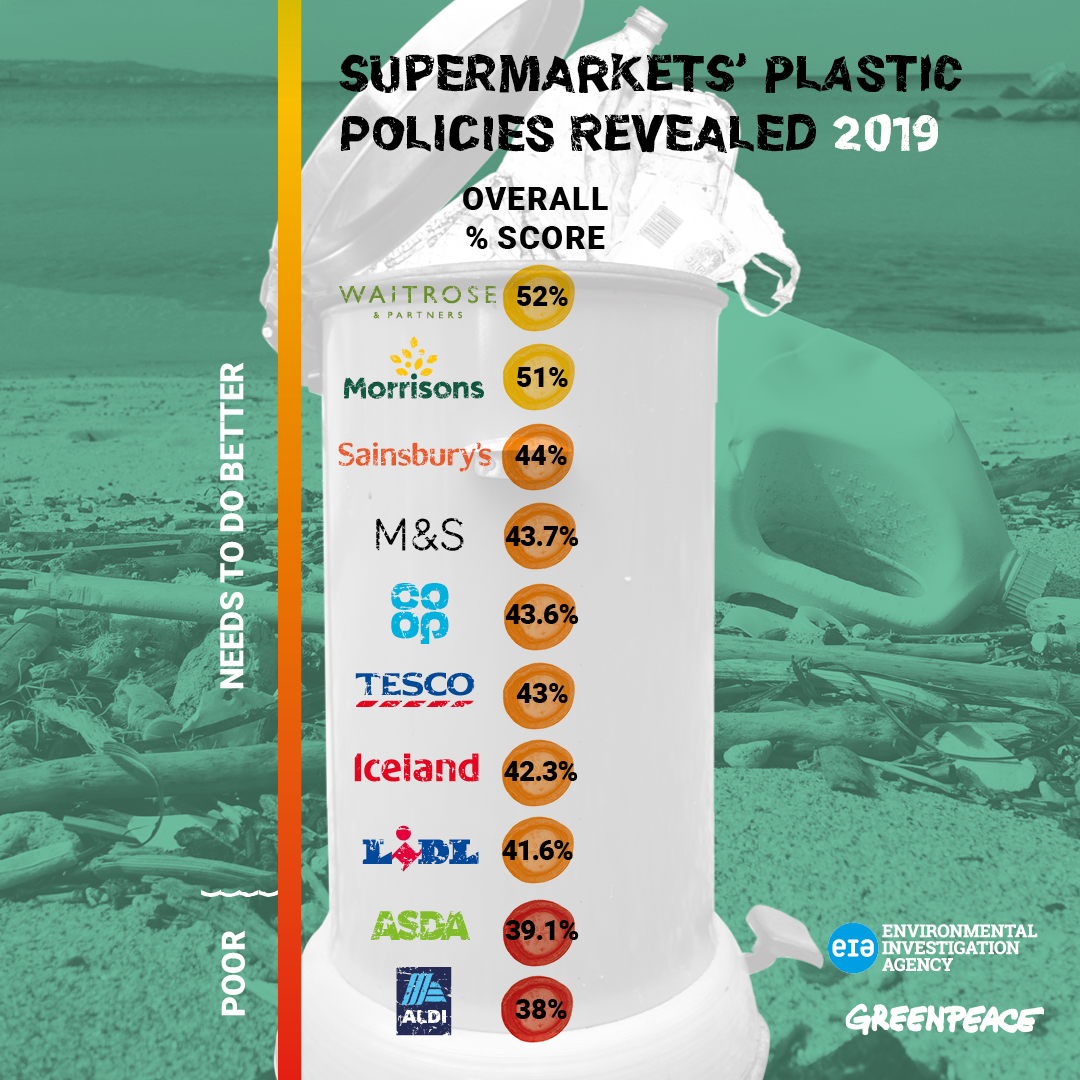 The percentage ranking was decided from scores across five categories:

Sainsbury’s were one of the big climbers this year. Having come bottom of the league last year, they now sit more comfortably (but still far from perfect) at third place. Sainsbury’s announced plans to reduce plastic by 50%, and introduced reusable produce bags for loose fruit and vegetables. This came as tens of thousands of outraged customers took action against them – the UK’s second biggest supermarket business – for their plastic apathy.

Topping the leaderboard this year we have Waitrose and Morrisons – they’re there because of their enthusiastic approach toward refillable and reusable packaging. Waitrose also achieved an actual decrease in their plastic footprint this year, along with Tesco and Sainsbury’s. Morrisons have also made their loose and refillable ranges cheaper than packaged counterparts.

If refill stations and reusable packaging were introduced in all supermarkets, it would lead to a dramatic reduction in supermarket plastic.

Bags for life are bad for life in our oceans

One area all supermarkets could improve on easily is plastic bags. While the 5p charge may have driven down demand for carrier bags, it’s just shifted the problem. Supermarkets sold 1.5 billion “bags for life” last year – roughly 54 per UK household! That’s not a bag for life, that’s a bag for a week.

This is a solvable problem. By charging more for bags for life, giving discounts to those who reuse them or bring in their own reusable bags, supermarkets can reduce demand.

Supermarkets also need to be doing much more on throwaway packaging. They pumped out roughly 58 billion pieces of plastic packaging last year. Our oceans mustn’t be where they end up.

Thanks to ordinary people, speaking up and taking action, there is hope. Whether you’re tweeting your supermarket about ridiculous plastic-wrapped bananas, or taking in reusable containers and bags when you shop, supermarkets are taking notice.

Because of you, pumping out pointless plastic is becoming less and less viable for supermarkets. We need to see a refillable revolution hitting the shop floors, and more productive measures to reduce plastic. Thanks to you, supermarkets know what they need to do, now they need to get on with it.