This summer’s extreme weather has shown how climate change can affect anyone across the world. But we can’t ignore the fact that those who have been on the frontline of climate-related disasters for a while now have been people of colour.

Statistically speaking, people of colour are far more likely to experience the catastrophic effects of climate breakdown: flooding, heat waves, drought, wildfires, and rising sea levels. This has been the case for some time and will only get worse as the crisis intensifies.

There is on average one climate disaster occurring worldwide every week, according to the UN. And most of those are happening in developing countries like Indonesia, Columbia and Kenya, often referred to as the global south.

The climate crisis is rarely mentioned as a cause of these disasters when they are reported on in the news. But the truth is extreme weather events are getting more frequent and intense as a result of climate breakdown.

And here’s the real injustice – the people most affected are also much less likely to have contributed to the problem in the first place.

Researchers at Oxfam found that someone in the UK will take just five days to emit the same carbon as someone in Rwanda does in an entire year. By 12 January of every year, the average Brit’s emissions will have overtaken the annual per capita emissions of a further six African countries: Malawi, Ethiopia, Uganda, Madagascar, Guinea and Burkina Faso.

Why is this happening?

Corporations and governments in the global north*, have long been (and continue to be) responsible for people of colour paying the price for the climate emergency. This inequality is down to racism going back hundreds of years.

Many countries in the global southThe term Global South is often used to refer to less economically wealthy countries. have long histories of colonial rule, during which their resources, land and labour were stolen by European colonisers. Thriving societies and economies across South America, Africa and Asia were reshaped to benefit European empires.

The legacies of colonialism are still alive and well today. Global trade systems are set up to favour western countries, and multinational corporations continue to exploit people and the environment in the global south through extractive industries like mining and fast fashion.

This exploitation leaves countries in the global south less able to deal with climate disasters when they happen. They have worse infrastructure, weaker economies and are often unable to borrow the money needed to deal with the climate crisis.

This isn’t about blaming individuals in the global north for the size of their personal carbon footprints.

The world’s biggest polluters are large multinational companies from the global north. These companies are making a real mess of the climate – a mess that the global south is having to deal with. (And one that rich countries will increasingly have to deal with too.)

In 2017 the Carbon Majors Report identified 100 companies that had contributed to 71% of the world’s greenhouse gas emissions since 1988. Unsurprisingly, most of these companies are run for the profit of shareholders in the global north.

Colonialism was motivated by the desire to exploit the global south’s people and natural resources irrespective of damage caused to people’s lives or the environment. Corporations and governments are continuing to do this today.

The situation in the UK

The disproportionate impacts of the climate crisis aren’t just happening far away. They are affecting lower income communities and people of colour right here in the UK.

Black African and Caribbean people are exposed to higher levels of illegal air pollution than any other ethnic group in the UK. The country’s worst air pollution levels are seen in neighbourhoods where people of colour predominantly live and this is fuelling a public health crisis. Air pollution is a contributing factor to several underlying health conditions which black women suffer from at alarmingly high levels.

“People of colour in the UK are more likely to live in poor quality housing that is vulnerable to flooding and less equipped to deal with extreme heat.”

People of colour in the UK are also more likely to live in poor quality housing that is vulnerable to flooding and less equipped to deal with extreme heat. Just as those in the global south are least able to adapt to climate change, their diasporasA diaspora is a dispersed population with a common origin, background, or beliefs. For example, the Ghanaian diaspora in the UK. in the global north are disproportionately faced by the same problems.

This isn’t a coincidence. It is again because of structural racism that people of colour in Europe and North America are more likely to live in bad quality housing, in built up areas and work in industries where they are more exposed to pollution.

What can be done?

While people of colour in the global south are at the frontline of climate-related impacts, they are also the first to resist environmental destruction.

For thousands of years, people of colour have lived in harmony with nature, by practising sustainable farming, and effective fire and waste management techniques – solutions which are often more friendly to the planet than industrial fixes.

People of colour hold answers to many of the problems of climate change, so we should make sure that they are given the resources and freedom to implement these solutions!

Fundamentally though, we can’t win the fight against climate chaos without dealing with racism. We must call on governments and corporations to tackle the climate emergency urgently – and in doing so, help to correct ingrained racial inequalities to create better, more equal societies. 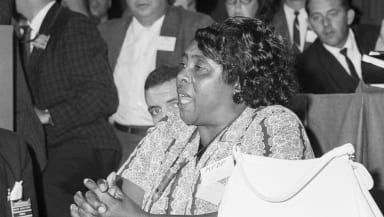 During Black History Month, we celebrate US voting rights and food justice activist Fannie Lou Hamer. As well as famously advocating for civil rights in the 1960s, Hamer was a pioneer of grassroots farming cooperatives which have continued to inspire 21st century urban agriculture collectives. 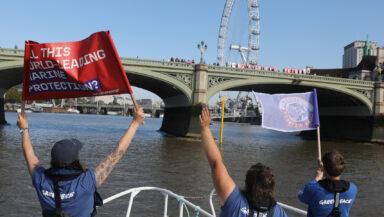