Huge chunks of the Amazon rainforest are being illegally sold on Facebook, according to a new BBC investigation. The land for sale includes national forests, land which is part of a protected area, or land reserved for Indigenous Peoples.

The Amazon is the most biodiverse place on Earth. It has faced years of deforestation –  for logging, mining and particularly for industrial farming for meat and dairy. Huge areas of the Amazon and other large areas of land are cleared by fire to start cattle ranches and other farms, a practice actively encouraged by the Brazilian president, Jair Bolsonaro.

Now, enormous lots of Amazon rainforest are being invaded, cleared, and put up for sale on Facebook. Some of the plots listed via Facebook’s Marketplace service are as large as 1,000 football pitches. Sellers admit they don’t have a land title, making the sale illegal.

Facebook told the BBC that it would work with local authorities, but wouldn’t take independent action on its own to halt the trade.

The trouble is, the Brazilian government is unlikely to intervene. By passing the responsibility onto Brazilian authorities, Facebook is allowing the sale of stolen land to go on.

The Amazon rainforest helps regulate the climate and is home to millions of people – many of whom are Indigenous or traditional communities.

The BBC’s investigation found that Facebook Marketplace sellers were trying to sell off land within the Indigenous Uru Eu Wau Wau People’s reserve. At least five other Indigenous groups that live in voluntary isolation from our civilization live in the area, which is in Rondônia State – one of the most deforested part of the Amazon rainforest in Brazil.  Many of the ads found for illegal plots are in the region.

‘We feel unsafe when we go to sleep. We fear someone will come and attack the village and attack us too,’ Bitate, an Indigenous community leader of the Uru Eu Wau Wau people, told the BBC.

The Brazilian federal environment agency has the authority to monitor the Amazon, and fine and arrest loggers and farmers for breaking the law. But under Bolsonaro’s government, they’ve had their inspection budgets cut.

Thanks to these cuts, the former head of the agency has gone on record to say that through ‘Bolsonaro’s speeches since 2018, what [illegal invaders] understand on the ground is that environmental crime is now free of charge’.

In fact, environmental crime is not only free of charge, but extremely lucrative for land grabbers. One land grabber, Fabricio Guimarães, filmed secretly in the BBC’s investigation, was able to triple his initial asking price to $35,000 (£25,000), for forested land he had grabbed from Indigenous communities and burned to the ground.

Fabricio is not a farmer. He has a steady middle-class job in a city, and views the rainforest as an ‘investment opportunity’.

Fuelled by the cattle ranching industry, land grabbing is being made legal by the Brazilian government

Since President Bolsonaro came to power two years ago, Amazon destruction has been speeding up.

Land invaders have been lobbying politicians to scrap rainforest areas’ protected status once they have been illegally razed. They do this so they can buy it from the state, and gain legal ownership.

For Indigenous Peoples like the Uru Eu Wau Wau, this is a death sentence. And Facebook, the world’s largest social media platform, is complicit.

Facebook needs to do better. Together we can make that happen

It doesn’t have to be this way. Facebook have the power to immediately ban and disable all sales of protected Amazon land on their platform. They also have the power to block and remove users involved in this criminal and harmful activity.

Many of us are users of Facebook. We have the power to challenge the platform to do better. If thousands of us voice our anger, we could get the bosses of Facebook to listen and take action. That starts with this petition. Will you join in, and make your voice heard? 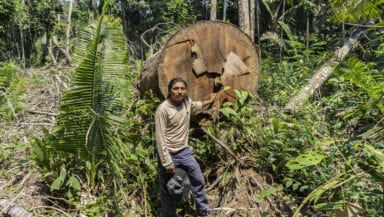 Indigenous Peoples: what you need to know 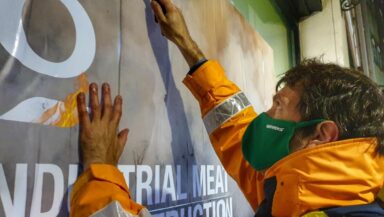 Want to take part in Greenpeace's peaceful direct actions and creative protests? It’s a big decision to volunteer, but anyone can stand up for change.