Will the government keep its promise to reduce plastic waste?

The government made great promises that reducing plastic at source would be central to new environmental regulations it was planning. But the proposals, published earlier this week, fell far short of much-needed targets to reduce single-use plastics.

The new environment bill, a set of government proposals designed to legislate on environmental protection, was supposed to represent a real turning point on plastics. Indications from the government suggested that the upcoming Environment Bill would include legally binding plastic reduction targets.

When Boris Johnson said that “this landmark legislation will set a framework of far-reaching, legally binding targets to reduce plastics,” it felt like a real solution was on the horizon.

The bill promised to turn off the plastics tap. But at the moment, the proposals don’t go nearly far enough. But as the bill goes through parliament, there will still be opportunities to include clear targets to reduce single-use plastic by at least 50% by 2025.

It’s now clear that recycling will not be enough to tackle our plastic crisis. Plastic is tough to get rid of, so all too often it ends up polluting our rivers and seas. Many of us have campaigned long and hard for plastic reduction targets, and it’s working – Sainsbury’s has recently pledged to cut its plastic use by 50% by 2025.

We often say that if your bath was overflowing, you wouldn’t reach for a mop, you’d turn off the tap. Legally binding plastic reduction targets will achieve just that – stemming the flow of plastic into our environment.

And most plastics are made from fossil fuels, so plastic production contributes to our climate emergency too.

So what does the environment bill have to say about plastics?

The bill creates the powers to introduce some measures on tackling plastic pollution that the government has been talking about since last year’s Waste and Resources Strategy. These include a deposit return scheme (DRS) for drinks bottles, powers to make producers of plastic packaging pay the cost of cleaning it up, and more consistent collection of household recycling.

There’s no clarity on the details – will they do DRS properly and include drinks bottles of all sizes and materials? And will producers be required to cover the full cost of dealing with their waste?

The government will also create powers to introduce charges on more throwaway plastics, which could apply to things like plastic cutlery. But companies could just switch to other environmentally harmful materials – so these charges should apply to any single-use items or materials, except for essentials like medicine and accessibility needs.

What’s more, all these measures would do is bring us in line with the EU’s single-use plastics directive, which should be the minimum baseline by which our action on plastic is judged.

These measures are all positive, but none are as strong as making plastic reduction a legal requirement, with targets like reducing single-use plastic by a minimum of 50% by 2025.

In its current state, the environment bill merely gives the government new powers to introduce a target. There’s no detail about what kind of target could be introduced or how ambitious would it be. And the government has given itself until 2037 to meet any such target.

Plastic production is rising. We’re seeing consistent pressure from the public, and famous figures like Liz Bonnin, Anita Rani and Hugh Fearnley-Whittingstall to reduce the amount of plastic that we make and use.

The government’s recent measures still do nothing to drive a nationwide shift to the reusable, refillable and packaging-free solutions so desperately needed in the face of the plastic pollution crisis and climate emergency.

You can help end plastic pollution

The UK's rivers are a source of life for otters, freshwater fish and birds like kingfishers. But they are becoming plastic waterways pumping pollution through our towns and villages and into our oceans. A strong environment bill could dramatically cut the amount of single-use plastic we make and use, and MPs will have the chance to make this happen. 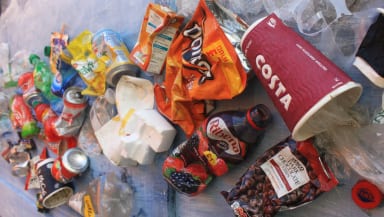 Plastic and coronavirus: here’s what you need to know

While the world is rightly preoccupied with tackling coronavirus, our oceans and wildlife are *still* choking on plastic – and oil companies are pushing to produce more of the stuff than ever before. So what do we need to know about plastic in the age of Covid-19? 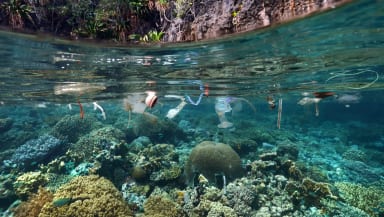