Offshore: oil and gas workers’ views on industry conditions and the energy transition

This report shares the testimonies of workers in the industry and their perspectives and priorities in the looming energy transition. The survey results show that morale is low amongst the workforce, who feel they are bearing the brunt of an industry in decline. But these workers are willing to retrain and move to new sectors. They want secure and well-paid work that makes use of their skills and experience.

Read the foreword below, or download the full report here.

From the first gas to come ashore in late 1966 to the first drop of oil on 18th July 1975, it took just seventeen years for the UK to become the world’s fifth largest oil and gas producer, in large part due to significant government support and subsidies.

For years the industry was dominated by oil majors  – some of the richest companies on Earth. Now, the holdings have diversified, expanding to include smaller oil companies like Ineos, state companies like the China National Petroleum Corporation (CNPC) and private equity backed companies such as Chrysaor.

What remains constant is corporations in the North Sea operating out of the public eye and being governed by the boom and bust cycles of the global fossil fuel industry. We frequently speak about oil and gas in terms of profits, taxation, regulation, pollution, extraction, but what about the workers who handle the levers of production; who have worked through decades of the sometimes monotonous and oftentimes turbulent life offshore?

Work in the North Sea has always been precarious for a number of reasons, including a lack of government regulation, the challenges of collective organising offshore, share prices plummeting and the altered balance of risks and rewards from a mature oil basin. In 2014, oil and gas workers found themselves in a downturn caused by the global oil market. Amongst the storms of the North Sea, workers were made to weather decreases in pay rates, huge cuts in their numbers and a change in shift patterns to spend an extra five weeks a year offshore for the same pay.

2020 has brought its own challenges, with unemployment across the UK expected to reach 2.5m by the end of the year as the economic impacts of the global pandemic and the end of government support schemes take their effect. The consequences of Covid-19 on oil and gas, intertwined initially with another global price war triggered by disagreement over production limits between Russia and Saudi Arabia, have been profound. The price of a barrel of Brent collapsed to $19.71 on the 21st April 2020, with the price of US oil turning negative for the first time in history on the same day. The temporary end of the Organisation of Petroleum Exporting Countries (OPEC) production limits and the collapsed oil demand due to global shut-ins and closures because of Covid-19 led energy analysts to indicate that this dramatic turn of events would speed up the emergent energy transition.

This upheaval has coincided with an accelerating climate emergency and public clamour for action, bringing mounting pressure on the fossil fuel industry – one of the most polluting globally – to be wound down. In 2018, the UN’s climate scientists, the Intergovernmental Panel on Climate Change (IPCC), released a report revealing the devastation of a world that breaches 1.5°C of warming. Across the world, renewable energy generation is rising – a trend which can be expected to continue as the impacts of climate change sharpen focus on reducing the use of fossil fuels.

Given this increasingly frequent volatility, the ever-growing maturity of the UK’s fossil fuel reserves and the heightened focus on oil and gas as a central climate issue, the North Sea has become a clear battle ground for all engaged in conversations about energy transition. But what does this mean for oil and gas workers?

Platform, Friends of the Earth Scotland and Greenpeace are committed to a worker-led just transition and have come together to create a means to hear from and talk to those working in oil and gas. This report shares the results of a survey and the testimonies of workers in the industry on the impacts of Covid-19, the oil price crash and their perspectives and priorities in the looming energy transition.

Energy systems help to shape our economic and political structures. As we inevitably change our energy system in the face of climate change, our economic and political systems must change too. An energy future grounded in democracy can create the potential for more just outcomes across society. A well-managed energy transformation can meet UK climate commitments while protecting livelihoods and economic wellbeing – provided that the right environmental and social policies are adopted and that the affected workers, trade unions and communities are able to guide policies. 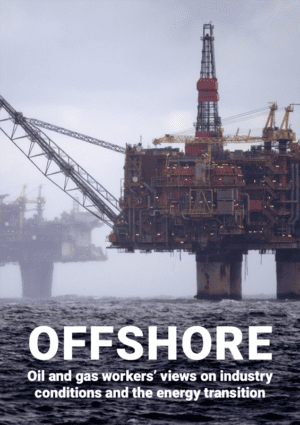