World leaders – including US President Joe Biden – gathered in Cornwall to attend the G7 summit to discuss the health, climate and nature crises. This was the first of two global meetings Prime Minister Boris Johnson will host this year – and an opportunity for the UK to lead on climate action.

Greenpeace used this moment to greet world leaders as they made their way to the summit by sending them a strong and simple message.

For the first time, 300 illuminated drones and light projections have been used to create breathtaking 3D moving images of iconic animals. The animals travel from all corners of the world and are seen descending on Cornwall, demanding that the world leaders at the G7 ‘ACT NOW’ to tackle the climate and nature crisis.

Then – to make sure world leaders saw our message – activists staged a protest as US President Joe Biden landed in the UK on Air Force One.

Read on to find out more about how we created this message.

The animals that lit up the night sky over Cornwall are made up of 300 illuminated drones. Using complex software, drones were choreographed to form 3D shapes of iconic animals: from the giant blue whale to the tiny (but very important) bee. It was made for Greenpeace as a collaboration between Celestial - the drone display company behind Scotland’s Hogmanay 2021 New Year’s drone show, projectionists Projections On Walls and animators We Are Covert.

Together the animals journey from all over the world to the cliffs in Cornwall – where world leaders were staying for the G7 – and transform together into a final message: stop extinction, act now. 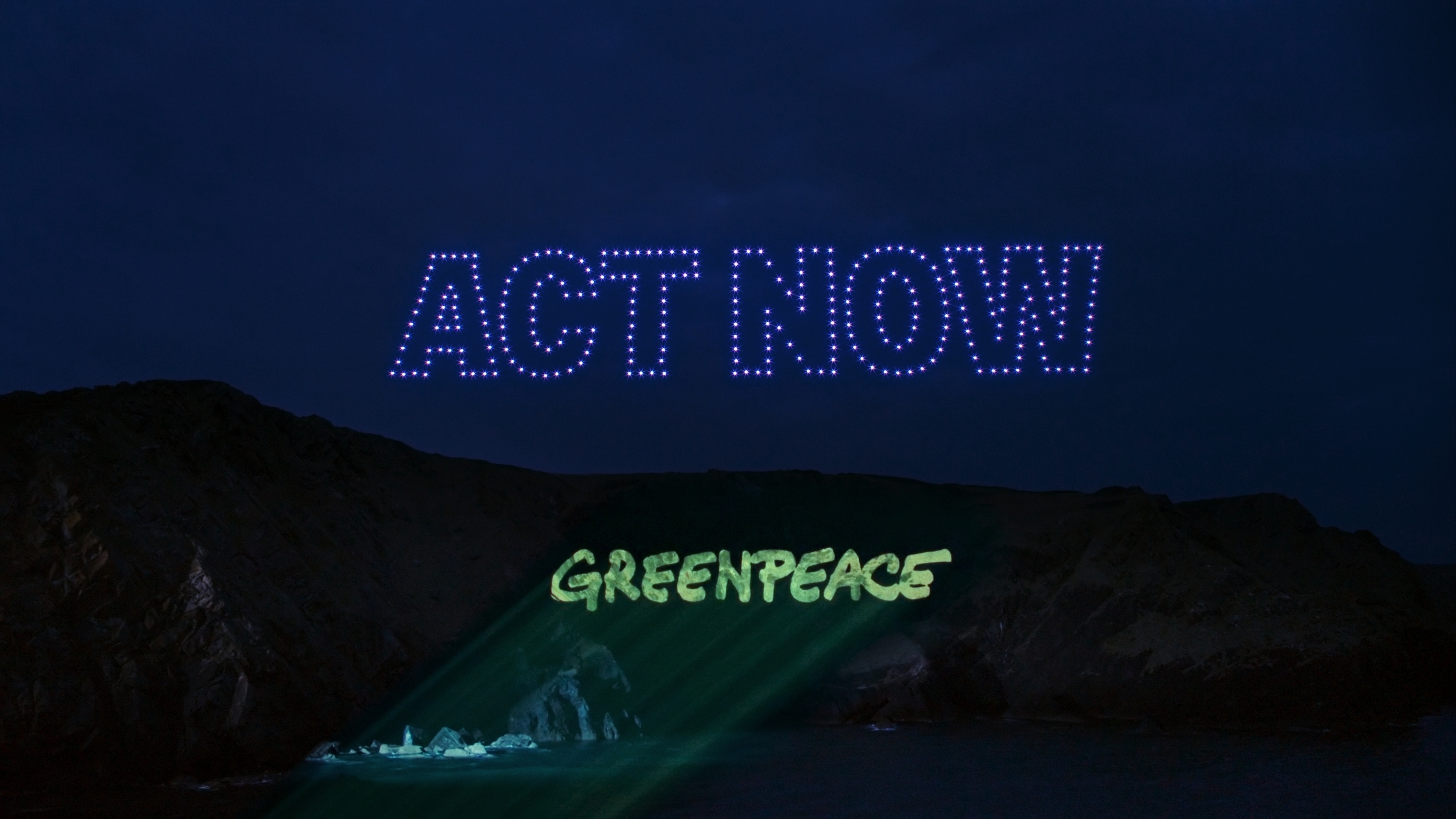 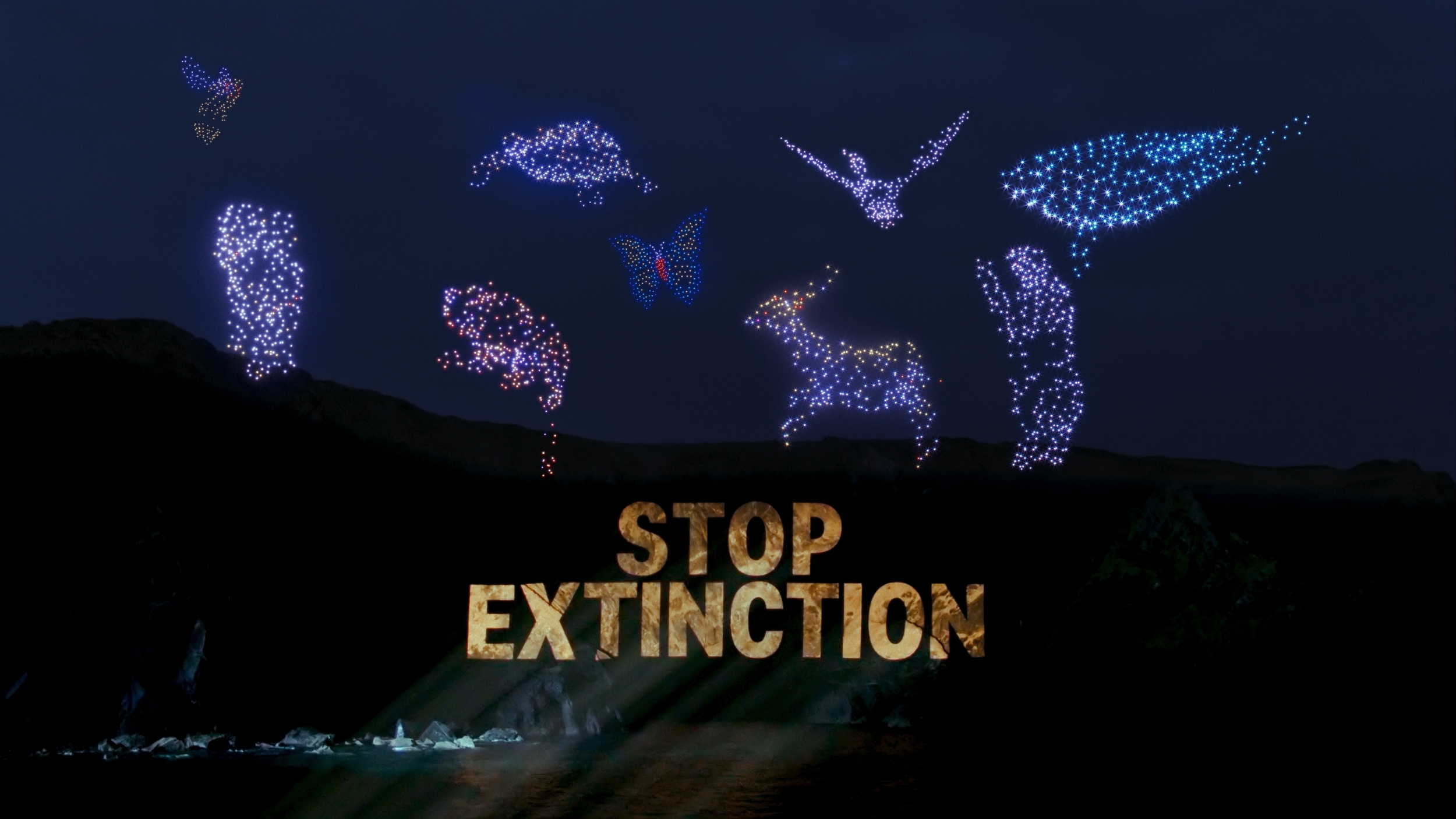 Children narrate the film with powerful messages of hope, such as, “I hope it’s not too late, I hope the grown-ups in charge wake up” and “I hope they defend the forests for the animals and people living there”.

Hearing the children’s hopes for a better world was a deeply moving experience for the adults who were present at the recording session that day. And in the video, the voices of children make us think about what kind of world we’ll be leaving for them in the next 100 years.

In the final moments of the video, the last child gives one final message: Hope comes from action, not words. This phrase was inspired by climate activist and school striker Greta Thunberg. It serves as a reminder to world leaders (and people everywhere) that there are reasons for hope. But only if we take meaningful steps and act now.

Enough time has been wasted on warm words and setting targets, which is what these meetings often seem to deliver. We need bold commitments but they must also be urgently delivered. World leaders have the power to tackle the mounting but interconnected crises we face, but only if they act now.

The projection animals were filmed across parts of Cornwall including the Lost Gardens of Heligan, Mullion Cove and Sandy Acres.

Several trips to Cornwall were required to locate the beautiful Cornish landscapes needed to tell that part of the story. Mullion Cove and the Lost Heligan Gardens were epic natural locations that mimicked some of the world’s flora and fauna.

Drone pilots from around the world also sent the team footage of deserts, jungles, mountains and Antarctica – to help capture the majesty of our natural world on a global scale. This video tells the full story of how the film was made.

Hannah Peel and the Ulster Orchestra

A truly epic video needs an amazing soundtrack - and that’s exactly what we got. The film’s music was created by producer and Emmy-nominated composer Hannah Peel, who has scored music for film, theatre and television, including Game of Thrones. The music was recorded live in Belfast by the Ulster Orchestra. We think they did an incredible job.

While this video takes place over parts of Cornwall where the G7 happened, it was important we made sure leaders didn’t miss seeing our message in person.

To coincide with the release of this video, activists staged a protest to deliver a direct message to world leaders ahead of first talks.

In the last few seconds of the video, you can see the US president’s plane touching down to land in the UK. As that happened, activists unfurled a banner with the same urgent message that the 300 illuminated drones spell out in the sky: Act Now.

Why send our message this way?

The need to stop climate change gets stronger by the day; yet action remains too slow, too insignificant, or going in the wrong direction entirely. By combining art and activism we wanted to create a moment that reminded our world leaders of the important need for action.

These are the commitments we want from the G7 group, representing the world’s richest nations:

The UK, along with the rest of the world is at a turning point. In the past 12 months we’ve learnt about what it means to act in a crisis. But we’ve also seen what happens when world leaders don’t listen to science and don’t act immediately.

And while it’s hard to know exactly what the future has in store, what we do know is that the choices our leaders make today will shape our society, economy, health, and climate and nature for decades to come.

That’s why when Greenpeace had the opportunity to deliver a message in a way never seen before – we knew we had to take action.

Sign the petition to tell Boris Johnson: It’s time for the UK to deliver real leadership on climate change.