It made headlines, it broke records, it *finally* got linked with climate change. Here’s a look back at some of the wild weather we braved in 2019.

Remember this? In February 2019 there were several days where coats up and down the country were left at home. What was that? 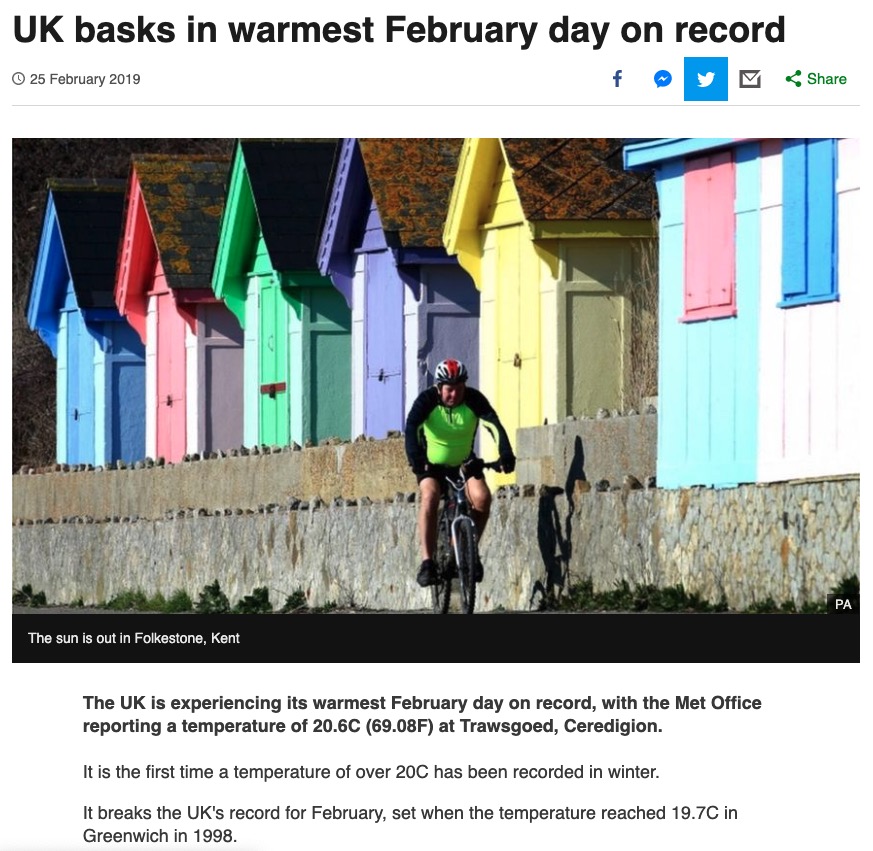 However enjoyable it was basking in the extra sunshine, and good for the ice cream trade, it left us feeling a little… to put it in technical terms, weirded out.

This February, we had the warmest day of winter on record. It might have felt lovely for some but ecologists warned that the unseasonably warm weather could be difficult for hibernating species, like dormice, hedgehogs and bats.

Climate scientists confirmed that it was consistent with the sort of strange weather patterns expected from a changing climate.

And then when it came to our actual summer, it felt like the sun went in to overdrive.

In Cambridge on 25 July, thermometers reached a sizzling 38.7 degrees. What does Cambridge think it is? Marrakech?!

And so, yet another heat record was broken in 2019. What’s more, the whole of Europe was feeling it…

3. More UK wildfires than any year on record

And while it often went underreported, the unusually high temperatures and lack of rain left much of the UK countryside like a tinderbox, and 2019 saw more UK wildfires than any other year on record.

Not only are the wildfires aggravated by the warm weather associated with climate change, they also release large amounts of CO2 into the atmosphere, fuelling the problem further. 😔

One way in which climate change is expected to affect the UK in particular is with heavier winter rainfall. And this year, sadly, it looked like the future had arrived.

It's not just in the Amazon where wildfires have been raging. It's right here in the UK too. 🔥🔥🔥⁠ ⁠ ⁠ We need to protect our planet so it can protect itself from wildfires. 💚 🙏⁠

In November large swathes of Yorkshire, Nottinghamshire and beyond were affected by extreme flooding – in some cases the rainwater rising at unspeakable speeds, leaving people stranded in shopping centers and office buildings.

What’s more, a Greenpeace Unearthed investigation revealed that 12,888 homes are set to be built across England in high-risk flood zones. This includes 548 homes approved in high-risk flood areas in Doncaster and Sheffield, two areas still reeling from recent flooding.

Our thoughts are with everyone affected by the flooding in Sheffield. ⁠ ⁠ Emergency services are risking their own safety in Yorkshire -and around the world 🌎 – responding to extreme weather events linked to climate change. 🚨⁠ ⁠ This climate crisis affects us all. We can't keep ignoring the causes because these disasters will just keep getting *worse.* ⁠ ⁠ Tell the government to take action on the Climate Emergency: https://act.gp/34LuOuj⁠ ⁠ ⁠ #ClimateEmergency #Sheffieldflooding #Sheffield #Climatechange #environment #nature #globalwarming #ocean #sustainability #earth #sustainable #actonclimate #climate #emergency #flooding #flood #sealevelrise #floods #resilience #weather

But however wet and windy it got in the UK, 2019 was truly devastating for others around the world. Hurricane Idai in Mozambique, typhoons in East Asia – and wildfires in Australia are blazing as we speak.

Gone are the days of politely remarking on the weather. Now we all know, this wild weather is one of the key symptoms of a broken climate.

Our seasonal message to world leaders, fossil fuel execs and bank managers? How about a new year’s resolution: TO SORT THIS SH*T OUT.