Campaigning is what we do, it’s why we’re here and it’s what we believe in. But I know with such huge global problems to be solved, it can often feel overwhelming. We can feel so small, our contributions insufficient.

Fighting for political change often means contacting your local MP, and I get it – it can feel like it’s not making a difference.

But I’ve been working in politics and political campaigning for a few years, and I’ve seen first-hand how powerful it can be. It’s always good to go bigger and bolder in our work to make the world a better place. But when we work together, even small, simple actions can be really powerful. So I’m going to run through some of the biggest challenges with political campaigning, and explain why it’s still worth doing!

This is tough, and can feel exhausting. What’s the point in writing to my MP, if I know they don’t care anyway? Yes, I get it, and it can suck to get the impression that your MP isn’t interested. But remember that your MP works for you.

Just recently, the government said there was no way they would introduce a windfall tax. Then after a backlash from the public and other MPs, they were forced to u-turn. Similarly with free school meals: they said no, then due to widespread pressure, they had to change course. Public pressure works!

Rome wasn’t built in a day. Creating change takes time, and every time you contact your MP, it adds to the wave of voices just like yours, who are working together to push your MP in the right direction. The more an MP hears from their constituents on an issue, the harder it is to ignore it!

There is strong public support for action on the climate crisis, but it’s often not the main issue that MPs hear about from voters. So we need to ensure that MPs are constantly reminded that their constituents do care about the issue.

MPs also care about what other MPs think, and particularly for new MPs it can be a challenge to speak out. But if they know they have the backing of their constituents, they’ll be more inclined to do so.

The more you can focus on why the topic matters to you and others locally, the more persuasive you will be. For example, have you noticed extreme weather where you live? Is it affecting farmers, coastal tourism etc? Could green investment bring skilled jobs to the area?

It’s good to remember that your MP will only keep their job if people in your constituency vote for them. So you could start thinking about things you could do around where you live to bring people together to call on your MP to take action and make it even harder for them to ignore. Local businesses or community groups may have influence over your MP, for example. The next general election could be just around the corner, so it’s a great time to start building some local power.

Not everyone can give up their time to find ways to pressure their local MP and that is totally understandable. That’s why we also create quick actions to take, like petitions. To win change we need not just people, but also a plan. Know that we will never ask you to take any action, however big or small, without it being part of a wider strategy – so your name on a petition may not feel like much sometimes, but it is often part of a bigger plan to gradually raise more and more pressure on the people in power who make decisions.

‘My MP is already supportive’

This is good, but there’s always more they could be doing. Your MP cares, so we want to see it! We show how much we care by campaigning and pushing for change – and we want nothing less from our MPs.

There’s loads of stuff your MP could be doing to demonstrate their support in Parliament. They could raise parliamentary questions to ministers or the prime minister himself. They could  lead debates or hold events on the issue. Your MP can even write to ministers directly and pressure them for change.

It can feel daunting to get all the details right when you’re speaking or writing to a politician, and there is always so much to learn! But remember don’t have to be a policy expert to care about an issue. Speak from your heart, why does this issue matter to you? What has motivated you to take action?

MPs have access to the science, and staff that can prepare briefings on the policy specifics of any topic. And Greenpeace’s politics team can brief MPs on the details. The most important job you can do is explain why you care, and why they should too. This is often a more powerful way to get your MP to listen.

How to stay motivated

Sometimes it can feel like a real slog when political change moves slower than the rate that the glaciers are melting. A good way to stay motivated is to look at the recent things we have won and see that together we are changing things.

Together we’re strong, and there’s loads of us! Just at Greenpeace we have nearly two million supporters and thousands of volunteers taking action. Add these to all the other groups in the UK and around the world and you have a powerful global movement for change.

And remember: politics is always changing. Since the last general election there have been 10 byelections (and more scheduled soon) and a no-confidence vote in the prime minister. And now there’s talk of the next general election being brought forward.

Political change also happens in response to events in the wider world, including public pressure. This creates opportunities to push the climate emergency to the top of the political agenda.

Our challenge is to make tackling the climate and nature emergency a vote-winner, and then make sure those who get elected actually deliver on their promises. We know together we are powerful, and we know we have to be. The emergency is here, the time to fight for our future is now.

Help win campaigns as part of our network of trained political lobbying volunteers. 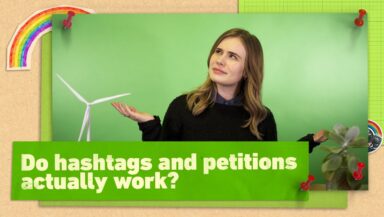 Online activism: how petitions and social media campaigns have changed the world

It’s easy to be cynical about online activism. But done right, petitions, videos and social media campaigns can – and do – change the world. 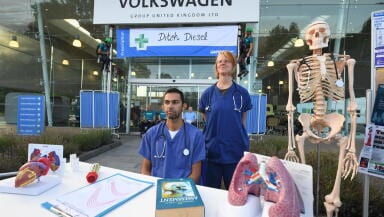 Peaceful protest is a fundamental part of democracy – without it, the world would be a very different place. Here's how it's changed things for the better. 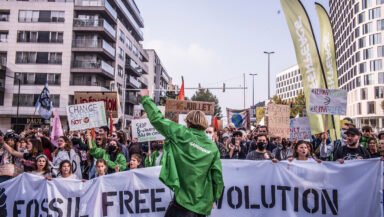 See all the practical things you can do to help the environment, all designed by Greenpeace’s world-class campaign teams for maximum impact.