Greenpeace activists wearing sashes reading “Climate Emergency” held hands to form a human chain across The Mall, stalling the incoming Prime Minister’s journey to meet the Queen. The activists also unfurled a Climate Emergency banner on the ground in front of the new PM’s vehicle.

Despite adopting a major target for ‘net zero’ emissions by 2050, the government’s own advisors highlighted earlier this month that the UK is off track to meet its targets. Greenpeace are calling on Boris Johnson  to “get to grips with the climate emergency” by:

“Climate change needs to be front and centre of this new administration from day one. The responsibility on a Prime Minister to act on the climate emergency has never been greater. If we want any chance of leaving a habitable world to our children we need to see action start immediately. We can’t blunder and bluster our way out of this emergency.

In reality the government is simply failing to tackle the climate crisis. It’s not enough to point to world-leading climate targets when too often government policy ignores or worsens the situation by supporting fracking and banning onshore wind. Boris Johnson must get to grips with the climate emergency or be remembered as the Prime Minister who jeopardised our children’s future” 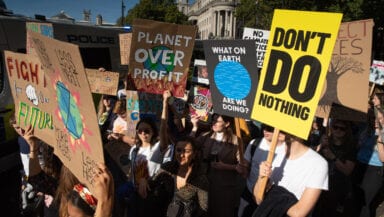 Are world leaders on track to sort out the climate and nature crisis?