The human rights and environmental crises in Brazil are interlinked as their Indigenous Peoples’ are being attacked in order to clear the way for more forest destruction. Landgrabbers and the mining and agribusiness sectors see Indigenous Peoples’ rights as an obstacle to expansion.

If Indigenous lands in the Amazon are opened up for large scale industrial farming and mining, the rest of the world will struggle to bring climate change under control. Amidst the “code red” climate emergency, the world cannot afford to lose the Amazon, which helps absorb carbon dioxide from the atmosphere.

In London, Amazon Rebellion, Brazil Matters, CAFOD, Greenpeace UK, Parents for Future and Survival International worked together to organise the demonstration and were joined by musicians including folk band Baque Luar and dancer and choreographer Andrea Maciel.

Speaking in Brasilia, APIB said:
“May the country listen to its indigenous peoples. Our lives are linked to the earth, as we live in communion with it. We are the guardians of the forests and all forms of life that live there. We are facing a Congress that continues to push its anti-indigenous agenda. We are fighting against the Time Limit Trick, scheduled to be voted by the Supreme Court on August 25th. We will resist!”

Caroline Pearce, director of Survival International said:
“This is the most critical court ruling for Brazil’s indigenous peoples for decades. The future of hundreds of thousands of people is at stake. It is also a crucial test of Brazil’s judiciary and democracy. It is up to the Supreme Court judges to uphold the constitution which recognizes indigenous peoples’ original rights to their lands as the country’s first inhabitants.”

Paul Morozzo, attending the protest from Greenpeace UK said:
“In July scientists announced that parts of the Amazon rainforest are now emitting more carbon dioxide than they are able to store. Indigenous Peoples are the best guardians of climate critical ecosystems but across Brazil, invasions and destruction of Indigenous lands and brutal attacks against Indigenous Peoples are skyrocketing. This is a critical moment in the global struggle for Indigenous Peoples’ rights, and in the fight against the climate crisis.

“Companies like Tesco are complicit in these policies while they still count Brazilian meat giants like JBS among their suppliers. JBS is a company notorious for its role in forest destruction and it’s benefitting from the Brazilian government’s radical agenda.” 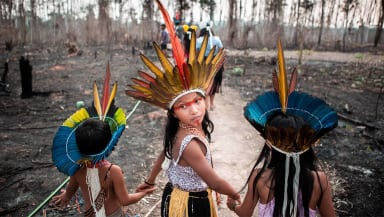