PICS will be available here.

New oil and gas licences in the UK could see carbon emissions reach the equivalent of 25 Cumbria coal mines, campaigners have warned.

If the government goes ahead with plans to issue new oil and gas licenses in UK waters, an estimated 14.3 billion barrels of oil equivalent of oil and gas could be extracted by 2050, which would release up to 5.7 gigatonnes of CO2 emissions when burned. That figure is 25 times the emissions expected from a proposed coal mine in Cumbria, which attracted much controversy for the government [1].

Mel Evans, head of Greenpeace UK’s oil campaign, said: “The UK will make a fool of itself in the run-up to hosting the COP26 global climate talks if our Energy Minister signs off on new oil and gas licences that serve to rip up the Paris Agreement.

“We know the government has already approved too much oil and gas extraction to meet our climate obligations under Paris, and the oil industry itself says that we’ve passed peak oil demand.

“Energy Minister Anne-Marie Trevelyan must rule out granting any new oil and gas licences, and instead secure a smooth transition to renewables, to safeguard our energy sector and the industry’s key workers who keep it going.” 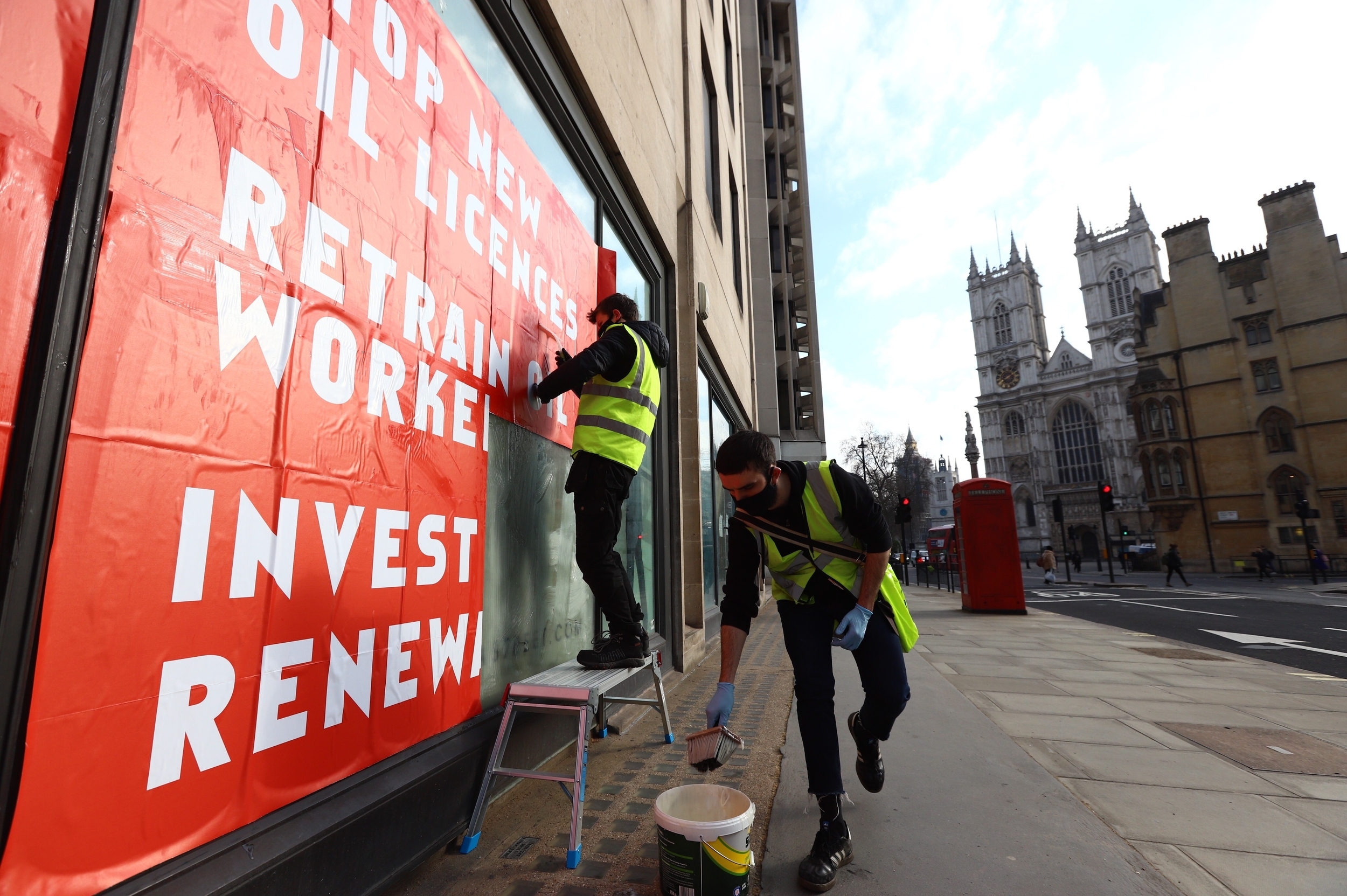 Greenpeace activists place posters opposite the Department for Business, Energy and Industrial Strategy, calling on the Energy Minister Anne-Marie Trevelyan to stop new licences for oil and gas extraction, retrain oil workers and back a smooth transition to renewables. © Luca Marino / Greenpeace

BREAKING: We stopped by the @beisgovuk office this morning with a message for the Energy Minister.

To avoid a #ClimateCrisis, they must stop granting new oil and gas licences.

To achieve a smooth transition to renewables, they must retrain oil and gas workers.#FossilFree pic.twitter.com/Tj7sZdxnRw

Ms. Trevelyan is under increasing scrutiny around the anticipated outcome of the government’s review into the future of the UK’s offshore oil and gas licensing regime. Questions on this may be raised during Business Questions on Tuesday. Since September 2020, BEIS has been conducting a review of how the regime relates to the UK’s climate obligations.

Campaigners have told the government that any future licences would not be aligned with the Paris Agreement [3], and would undermine the UK’s credibility as hosts of this year’s global climate talks, COP26.

Six socially distanced activists wearing COVID-safe masks took part in an activity at BEIS this morning. Working in three separate pairs, six people placed posters on windows opposite the Department building, and attached road signs along the route from the Department for Business, Energy and Industrial Strategy at 1 Victoria Street to the House of Commons at Westminster.

[3] Sea Change: Climate Emergency, Jobs and Managing the Phase-Out of Oil and Gas Extraction.  “The UK’s 5.7 billion barrels of oil and gas in already-operating oil and gas fields will exceed the UK’s share in relation to Paris climate goals…”