This is a guest article from veteran sustainability campaigner and writer Jonathon Porritt.

I’ve been ‘anti-nuclear’ since 1974, and my basic position hasn’t changed much during that time. Not because I decided back then that nuclear power was an inherently ‘wicked’ technology that must be avoided at all costs. I’ve simply concluded that it’s the wrong technology at the wrong time for sorting out all the challenges that we face. I can genuinely claim that I’ve been waiting more than 45 years for someone to prove me wrong.

In April, I published a new report: Net Zero Without Nuclear, which summarises the nuclear industry’s continuing inability to overcome its longstanding problems (on costs, construction delays, nuclear waste, security issues, proliferation and so on), and challenges the idea that we’re going to need new nuclear power to get us to a Net Zero economy by 2050.

Nuclear power and the challenge of climate change

The journey to Net Zero carbon emissionsTo reach ‘net zero’ emissions, a country or business would need to take at least as much greenhouse gas out of the atmosphere as it's putting in. In theory, this would reduce its overall contribution to climate change to zero. that we’re now starting out on (at long last!) is by far the most daunting challenge that humankind has ever faced. And we already know that the kind of radical decarbonisation on which our future depends is going to be incredibly hard.

Given the scale of the challenge we face, we need to have very strong grounds for keeping nuclear out of today’s low/zero-carbon portfolio. Not least as nuclear power, historically, has already made a huge contribution to low-carbon generation. Since the early 1960s, nuclear power has provided the equivalent of 18,000 reactor years of electricity generation. We’d be in a much worse place today if all that electricity had been generated from burning coal or gas.

“The land required for solar panels to provide all global energy would actually be significantly less than the current land footprint of fossil fuel infrastructure.”

However, times have changed, and the alternatives to nuclear power have performed better than almost anyone expected. Looking back on my first book, ‘Seeing Green’, from 1984, I was fiercely critical of nuclear power, but have to admit that my advocacy of renewables (as the principal alternative) was somewhat muted. Apart from a few visionaries in the early 1980s, no one really thought that renewables would be capable of substituting for the use of all fossil fuels and all nuclear at any point in the near future.

Happily, there is no longer any doubt about the viability of that alternative. In 2020, Stanford University issued a collection of 56 peer-reviewed journal articles, from 18 independent research groups, supporting the idea that all the energy required for electricity, transport, heating and cooling, and all industrial purposes, can be supplied reliably with 100% (or near 100%) renewable energy. The solutions involve transitioning ASAP to 100% renewable wind – water – solar (WWS), energy efficiency and energy storage.

The transition to renewable energy is already underway

The transition is already happening. To date, 11 countries have reached or exceeded 100% renewable electricity. And a further 12 countries are intent on reaching that threshold by 2030. In the UK, the Association for Renewable Energy and Clean Technology says we can reach 100% renewable electricity by 2032. Last year, we crossed the 40% threshold.

There is of course a world of difference between electricity and total energy consumption. But at the end of April, Carbon Tracker brought out its latest analysis of the potential for renewables, convincingly explaining why solar and wind alone could meet total world energy demand 100 times over by 2050, and that fears about the amount of land this would require are unfounded. The land required for solar panels to provide all global energy would actually be significantly less than the current land footprint of fossil fuel infrastructure. As the report says:

“The only impediment to change is political. At the current 15% to 20% growth rates for solar and wind, fossil fuels will be pushed out of the electricity sector by the mid-2030s, and out of total energy supply by 2050. Poor countries will be greatest beneficiaries. They have the largest ratio of solar and wind potential to energy demand, and stand to unlock huge domestic benefits.”

“The simple truth is this: we should see nuclear as another 20th century technology, with an ever-diminishing role through into the 21st century.”

Nuclear plays no part in any of these projections, whether we’re talking big reactors or small reactors, fission or fusion. The simple truth is this: we should see nuclear as another 20th century technology, with an ever-diminishing role through into the 21st century.

It has proven incapable of overcoming its inherent problems of cost, construction delay, nuclear waste, decommissioning, security, let alone the small but still highly material risk of catastrophic accidents like Chernobyl and Fukushima. My ‘Net Zero Without Nuclear’ report goes into all these inherent problems in some detail.

Why do the main political parties still support nuclear power?

So why are the UK’s politicians (in all three major parties) still in thrall to this technology? It’s here we have to go back to Greenpeace’s first voyage, confronting a nuclear weapons test at Amchitka! Some environmentalists may still be taken aback to discover that the Government’s principal case for nuclear power in the UK today is driven by the need to maintain the UK’s nuclear weapons capability – to ensure a ‘talent pool’ of nuclear engineers and to support a supply chain of engineering companies capable of providing component parts for the nuclear industry, both civilian and military.

The work of Andy Stirling and Phil Johnston at Sussex University has shown the strength of these connections, demonstrating how the UK’s military industrial base would become unaffordable in the absence of a nuclear energy programme.

What that means is that today’s pro-nuclear environmentalists are throwing in their lot not just with a bottomless pit of hype and fantasy, but with a world still dangerously at risk from that continuing dependence on nuclear weapons. That’s a weird place to be, 50 years on from the emergence of Greenpeace as a force for good in that world.

You can learn more about Jonathon Porrit’s work on his website. Guest authors work with us to share their personal experiences and perspectives, but views in guest articles aren’t necessarily those of Greenpeace. 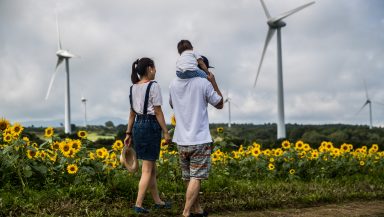 The UK has a rare chance to boost climate action around the world – but only if we take the lead. Let's tell Boris Johnson to step it up. 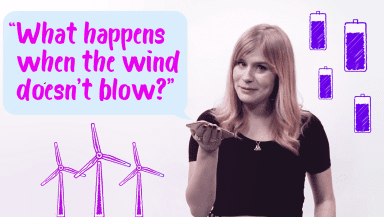 How we can use wind power when there’s no wind

Some people think we’ll always need lots of giant coal, gas or nuclear power stations to keep the lights on. But that’s not how it works anymore. 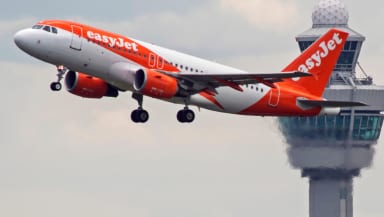