There’s something romantic about our oceans – so much mystery and wonder. They’ve been the inspiration for countless novels, poems and paintings for centuries.

But until recently the oceans were perceived to be so gigantic, so mighty that a little old species like us (humans) could never drastically impact or change them.

It’s now obvious that this is anything but the truth. Never in human history have our oceans faced such a perfect storm of different threats. Industrial fishing, oil drilling, plastic pollution, deep sea mining and the climate crisis to name a few. As a result the oceans are being pushed to breaking point.

The good news is that it’s not too late to save them. For the last couple of years Greenpeace has been campaigning to get at least 30% of the world’s oceans protected by 2030. This is the minimum amount of protection experts say is required this decade to allow our oceans to properly recover.

But is protecting 30% of the oceans really enough to save them? It’s a valid question and one that we’ve been asked a lot by our supporters.

Our oceans are vulnerable

Right now less than 3% of the oceans are properly protected, which means any harmful industrial activity is banned. Straight away you can see that this leaves the overwhelming majority of our oceans extremely vulnerable to destructive industries.

Over 3 billion people in the world rely on the oceans for their diet or livelihoods. And I’m not talking about the huge corporations profiting from the plunder. I’m talking about local communities and small-scale fishers who’ve lived in harmony with the oceans for hundreds of years – taking only what they need without disrupting entire ecosystems.

Our oceans are in a mess because of big business – whose greed is posing a direct threat to the way of life of frontline communities, causing fish populations to collapse and threatening more and more marine animals with extinction.

We all rely on the oceans to survive

It’s not just coastal communities that rely on the oceans – we all need them to survive. Our oceans produce half of the Earth’s oxygen. Healthy oceans are also vital in the fight against the climate crisis – the deep sea is the largest reservoir of stored carbon on Earth. We can’t have a healthy planet without healthy oceans.

The oceans need space to recover

The amazing thing about our oceans is that when they’re left alone and given space they show an incredible ability to bounce back. And the best way to allow them to rejuvenate is to create a network of Marine Protected Areas (MPAs). These are areas where all destructive industrial activity is banned.

Creating a network of MPAs in 30% of our oceans this decade will give them the space they need to recover. But that doesn’t mean nothing else would need to change. We also need to move towards well managed small-scale fishing in the remaining 70%, ending the most destructive industrial activities and treating the whole ocean with more respect.

“Protecting 30% of the oceans would cover around 70 million square kilometers – an area the size of South America, North America, Europe and Russia combined”

Protecting 30% might not seem like much but let me assure you it’s not a drop in the ocean (pun very much intended). It would cover around 70 million square kilometres. That’s an area roughly equivalent to the size of South America, North America, Europe AND Russia combined! It would be a monumental increase in the protection that exists now and would give whales, sharks and other marine animals a lifeline that they desperately need.

Banning industrial fishing and other harmful activities in these protected areas would also benefit small-scale fishers through what’s known as the spillover effect.

The spillover effect is a biological phenomenon. When you properly protect a part of the ocean, the animals in the area prosper, they grow bigger and have more babies. And as the population increases some of them spill over into surrounding areas where fishing is allowed. So by creating MPAs you actually help small-scale fisheries.

Shouldn’t we protect 100% of the oceans and stop eating fish?

I’ve been vegan for over four years, so this topic is something I’m extremely passionate about. Yes in places like the UK and other western societies, where we have the luxury of more choice in our diets, people need to eat less fish. So if you’re reading this and you’re thinking about giving up fish or just eating less of it then you should give it a go. The more people that turn plant-based the better. 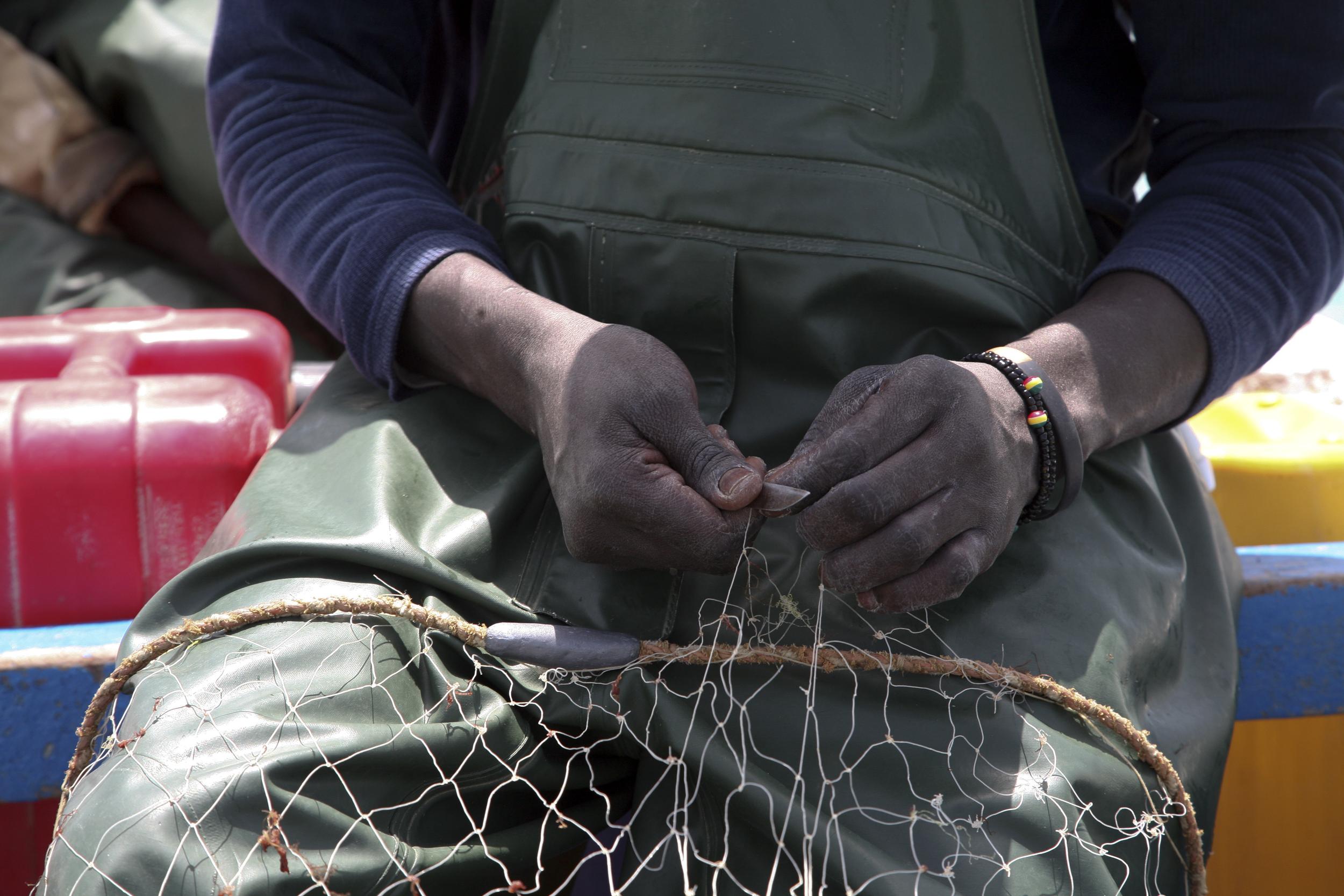 Abdou Karim Sall, president of the Fishermen’s Association of Joal and the Committee of Marine Reserves in West Africa. mends a fishing net. © Jacky Danielly / Greenpeace

But this just isn’t an option yet for billions of people around the globe. Putting the oceans completely off limits to all fishing or expecting everyone to stop eating fish completely is neither feasible or ethical. Especially as it’s not small-scale fishers who are pushing the oceans to the brink.

For millions of people in coastal communities, fish is an essential part of their diet and way of life. Industrial fishing is having a devastating impact on these communities. I’ve been privileged to travel and scuba dive in some incredible places like Indonesia, Malaysia, the Philippines and Papua New Guinea. In all of these places I’ve seen first hand how local coastal communities depend on small-scale fishing. And how more and more they’re struggling to make ends meet and put food on their families table.

The issue is very nuanced and it’s important to remember that industrial fishing (although an absolutely massive problem) isn’t the only threat our oceans face. That’s why creating MPAs is so important as it allows us to address all the issues at once.

To save our oceans, protect communities and tackle the climate and nature crises we need a network of Marine Protected Areas across the global oceans.

It won’t happen by itself though. As with most environmental issues there’s lots of money and power in maintaining business as usual. And destructive and greedy industries continue to lobby governments against ocean protection.

That’s why it’s up to all of us to demand proper protection for our oceans.

Know someone who needs to hear about this? Hit the button to share it with them by email.