‘They’ve got guns!’: how the soya industry is linked to violence and intimidation

In May 2019, men with guns terrorised a village on the edge of a vast soya farming estate in Brazil, where huge traders Cargill and Bunge are well established. Yet another example of the human rights abuses that are so often linked to industrial agriculture, it was witnessed by Greenpeace researchers and journalists. This first hand account reveals how the ever increasing demand for meat and dairy is leading to violence against communities.

It has been a little over six months since I visited the traditional rural village of Geraizeiros in the state of Bahia, Brazil. I was taking a group of journalists to interview people in the community, who have been under enormous pressure to leave their native lands. When I got out of bed that morning, I thought I understood the mortal danger facing this community. But I was still not prepared to find myself staring down the barrel of an assault rifle, in a room full of people praying for our lives.

This has become the reality in the Brazilian Cerrado, a region where small farmers are surrounded by never-ending industrial farms of soya beans and corn and they are never sure if they will make it home at the end of the day. For over 200 years, the Geraizeiros and their ancestors have lived in an area of economic interest in Brazil, where agribusiness has been expanding aggressively, sparing nothing and no one in its way.

In the late 1970s, a large agricultural enterprise called Agronegócio Estrondo was established in the region, destroying an area of forest almost four times the size of New York City to make way for soya farming. And almost 20 years ago, the company started to expand into the villagers’ lands, turning their lives into hell on Earth.

The soya produced by Estrondo at the cost of the lives and livelihoods of the Geraizeiros community is sold to traders like Cargill and Bunge and then shipped all over the world to become food for cows, chickens and pigs. Fast food companies like McDonald’s, KFC and Burger King all buy soya from those traders.

On 28 May 2019, we were visiting the community, our plan was to take a German TV news team to see the devastation caused by Estrondo up close. As well as the security around the clock to the illegal watch house built by the company, what struck me the most was the gigantic ditch, three metres deep, which Estrondo built around the land they invaded. Not only are the community residents unable to cross it, neither can the wildlife that lives in the region. Many animals die trying.

Things started to go wrong when we were at the village and a white pickup truck pulled up. Four men in khaki clothes emerged, assault rifles in their hands. “They’ve got guns!” said a woman from the community. “Ladies, go to my house.” I could see it was not the first time she had been through this.

We skirted around the manioc fields and met in one of the rooms in the village, hoping it was all a misunderstanding. While some of us were sobbing and others praying, it occurred to me how sad it would be if I died without being able to make some calls, say “thank you” to my parents. These are the things we think of when faced with imminent danger.

Then we heard fists pounding on the door and a man yelling, “Come out with your hands up, this is the police.” They broke into the room and ordered us to lift up our shirts, to show we weren’t armed. When we had to leave the room, the woman from the village fainted from the stress.

Outside, the rest of the men had gathered and the intimidation began. “We came here because we received a complaint and we need to enter your house to investigate.”

‘We’ve been through this many times before’

Many things about their story didn’t add up. They had no warrant to enter the house, the men did not wear police uniforms, nor did they have any identification on their vests. Their weapons, however, were very much real. Rifles as big as those used in war. I had never seen anything like it before.

The men pressured the residents for around two hours. But when the sun started to set on the horizon, and knowing that the press had recorded the entire episode, the men decided to leave. They told us it was not over, that they would be back.

We were all terrified, not just for ourselves, but for those who would remain behind. When were they going to come back? Would they come during the night? What will happen when they return?

If I was in a state of shock, I couldn’t imagine what the Geraizeiros were feeling. I couldn’t conceive this being part of their lives. But unfortunately, this is the harsh reality the community has had to deal with.

“Don’t worry about it,” said Edvaldo Lopes, one of the community members, “this has been happening for a long time. We’ve been through this many times before. But at least now you are here to tell our story.”

And it was then that we all died a little inside. Is that it? Is telling their story all we can do?

Human and environmental rights are deeply connected. Indigenous Peoples, traditional communities and those on the frontlines are the ones affected the most by the greed of corporations, often being tortured and even murdered.

We cannot allow these companies to continue looking the other way and making millions while people are living under constant threat of violence, fearing for their lives, and their rights are being abused. The world needs to know that there are people who risk their own lives, to protect the land, the planet.

Demand change now, before it is too late not only for the Geraizeiros, but for all of us.

The author is anonymous to ensure their safety. 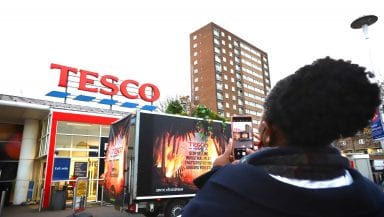 Five questions for Tesco about its role in forest destruction

Vital forests are being destroyed for the meat and dairy in Tesco’s supply chain. Here are five ways you can challenge Tesco to tell the truth about deforestation.