Polluting companies and their auditors are failing to integrate climate change and the 1.5 degree target of the Paris Agreement into their financial statements and audit reports  This leads to bad investment decisions that not only harm company profits, but also wreck the climate.

This briefing examines the voting records of shareholders on the issue of auditor appointments at the UK’s largest listed companies as well as at some of the world’s largest carbon emitters.  We find that such appointments are waived though with few objections of any kind and negligible references to climate-related concerns. Between January and August this year, shareholders voted by 90% or more to appoint the auditors at all but 3 of 349 large listed companies which disclosed full voting results.

Of the votes which were analysed, Vanguard supported auditors at all of the reviewed companies for which they have disclosed voting results; Blackrock voted only against one auditor (despite having a policy saying it may vote against auditors if climate risk is not reflected in financial reporting); and State Street Global Advisors voted against three. This suggests most large asset managers are a long way from taking the necessary voting action. The UK Government should step in and create a duty for companies and auditors to ensure climate risk is reflected in financial statements. 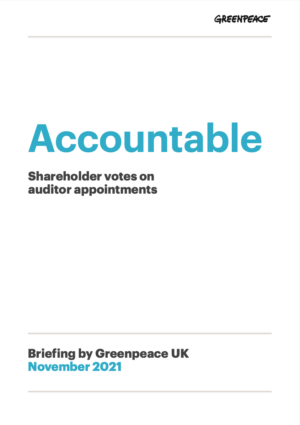