Greenpeace UK has been taking action against industrial fishing ships trawling in so-called Marine Protected Areas. New evidence has emerged that trawlers have been bulldozing the wreck of the world's oldest slave ship.

Industrial trawlers are not only threatening important marine habitats and iconic species in ‘protected’ waters around UK shores. They are also laying waste to marine archaeology – including a 17th-century English shipwreck, which is the earliest known vessel linked to the transatlantic slave trade.

The disturbed remains of the ship was dived by humans for the first time during the making of Enslaved, a groundbreaking new documentary series on BBC2 with actor Samuel L Jackson and journalist Afua Hirsch.

During filming, divers found fresh evidence for the damage of the ship, compared to evidence of the wreck recorded by remote-vehicle in 2009.

"More than 12 million Africans were trafficked. More than 2 million died en route. We thought it was worth telling that story."

In a groundbreaking new series, @SamuelLJackson and @AfuaHirsch explore 400 years of slavery.

The documentary series includes footage from dives all over the world by Diving with a Purpose – a group dedicated to the maritime history of African Americans.

‘If that wreck’s the final resting place of some of my ancestors, then it’s a burial ground. But it’s also a crime scene because they were taken. There was an injustice that took place, and no one has ever been brought to account. I want justice for those people. Archaeology can make sure we never forget.’

More than 12 million Africans were taken across the Atlantic in 45,000 voyages over 400 years, and many did not survive the journey.

Alannah Vellacott, marine archaeological advocate with Diving With a Purpose Tweet this

Leading British marine archaeologist Dr Sean Kingsley criticised the inability to protect rare wrecks like the Royal African Company ship as ‘a serious heritage failure’. Because the wreck lies outside UK territorial waters, England has no legal powers to protect wrecks like this.

Further details of the threats to the Royal African Company trader wreck will be published in the next issue of Wreckwatch magazine, of which Dr Kingsley is the Editor.

Kingsley’s research has found that in total, fishing trawlers sweep an area equivalent in size to half the world’s continental shelves each year. 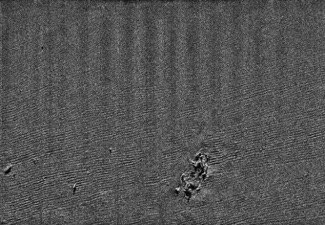 As well as an ‘underwater museum’ and ‘time capsule’, according to Kingsley, it’s also viewed by Enslaved as a potential burial ground of the slaves and crew who perished on its final voyage.

Images from a remotely-operated vehicle from 2009 were compared to images taken during the Enslaved filming dives in 2018, in which 48 iron cannon were found scrambled all over the seabed. 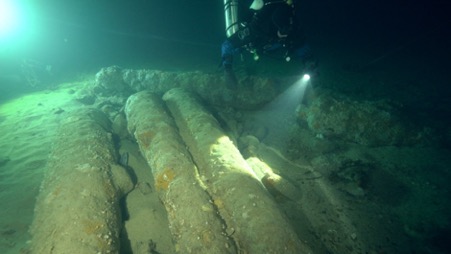 Iron cannon on the shipwreck have been dragged by and lost to fishing trawler action. In 2018 the first humans dived the wreck for Enslaved. Photo: © 2020, Associated Producers Ltd./Cornelia Street Productions.

‘A symbol of the pillaging of Africa’

They also found nine elephant tusks, each weighing up to 24 kilograms. At its height, the trade in elephant tusks was bringing 61 tons of tusks into London every year.

One of these tusks is brought up in the opening episode of Enslaved – a delicate operation for rebreather divers, as the wreck is 110 metres down. 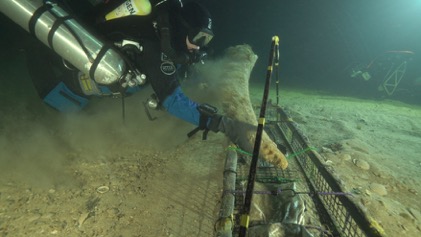 Alannah Vellacott, a marine archaeological advocate with Diving With a Purpose, said that ‘As Enslaved shows, so much of the African Diaspora’s history lies beneath the waves because of the transatlantic slave trade.

‘Bringing up the tusk saves it from the deep and raises the voices of people who didn’t have a voice. That tusk was worth maybe hundreds of lives of slaves. It’s a symbol of the pillaging of Africa. I never would have imagined this opportunity to give a voice to the silence, breathing new life into people of colour who are still living with questions unanswered.

‘It is paramount that we preserve what we can from wrecks like this, the only connections left to the ancestry and history of so many.’

The journalist and diver Kinga Philipps, also on the filming team, said that ‘issues concerning the blue depths of our planet are often very much out of sight, out of mind. This applies to everything from biomass and environmental issues to history.

‘Discovering the tusk wreck for Enslaved was bittersweet. The wreck, potentially the oldest of a slave ship discovered in human history, was in dire shape courtesy of fishing trawlers having torn at it for decades. Practices like this, when not controlled, will inevitably turn invaluable maritime history into mangled piles of debris, wiping away the stories they could tell.’

Enslaved’s director, Simcha Jacobovici, said that ‘On land people are pulling down statues of slave traders, forcing us to take a hard look at the past. Yet underwater, precious finds that actually witnessed the horrors are being destroyed under our very noses. It’s shocking.’

In Bristol – a city at the very centre of the transatlantic slave trade – during the Black Lives Matter uprising, protesters tore down a statue of slave trader Edward Colston and rolled it into the nearby harbour.

These events are connected by a long thread stretching back to the wreck of the Royal Africa Company ship. The company’s governor was James, Duke of York and future king of England – and its deputy governor was Edward Colston.

The Colston statue was pulled out of the harbour, and will be displayed in a Bristol museum alongside Black Lives Matter placards.

The secrets of the Royal African Company shipwreck will not be so easily recovered, thanks to what Kingsley calls ‘bulldozers of the deep’. 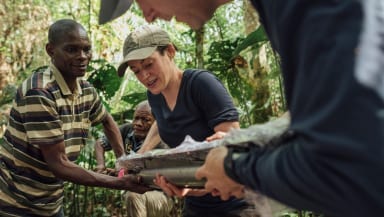 6 conservation success stories from the battle to protect nature

When it’s done right, conservation can help to heal our damaged world. Let these conservation success stories inspire you to keep standing up for our home.

Remember these names - they might just change the world 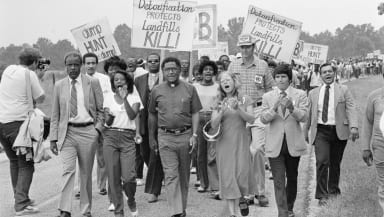 It's important to celebrate the invaluable contribution of black people to the global movement for environmental justice. Here are three powerful acts of protest against environmental destruction by black activists.