UK homes are the biggest energy-wasters in Europe, but it didn’t have to be this way

Britain’s homes are notoriously bad when it comes to energy efficiency, which means they use more gas, oil or electricity to heat. Insulating homes is one of the cheapest ways to cut carbon emissions, so why hasn’t it been done?

Here’s a riddle. What makes your energy bills higher, your home colder and the planet hotter? Oh, and funnels money into Russia’s war as well? Answer: a draughty, energy-wasting home, which the UK has no shortage of.

Britain’s gas-guzzling buildings have funded Putin’s war in Ukraine, fuelled the climate crisis and are now threatening to plunge millions of houses into poverty as gas prices soar sky high.

One of the reasons the UK uses for so much gas is that as well as having one of the oldest, most inefficient housing stocks in Europe, we’re also failing miserably at building better homes – just 1.8% of new homes in England meet the top efficiency rating, which means the other 98.2% need more energy to heat. 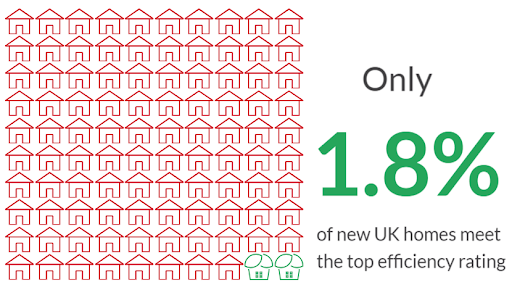 The UK is much less reliant than Germany or Italy on Russian gas, but we’re still the biggest consumer of the stuff in Europe after Germany, and 10th largest in the world.

So how did we get here? Gas dependence and poor home insulation aren’t inevitable facts of life, but the result of years of bad decision-making.

Almost as soon as it was established in 2008, the Climate Change Committee – the government’s official climate advisers – warned about the importance of tackling the country’s carbon-belching boilers and has since said they should be banned by 2033. The 2010s was to be a watershed moment when the government got serious about fixing Britain’s old and draughty homes. Instead, it became a lost decade.

Two years into his premiership, husky-hugging David Cameron launched a new efficiency scheme, the Green Deal, with an ambitious target of insulating 14mn homes. It was an unmitigated fiasco. The scheme was wound up a few years later after less than 2,000 householders signed up at a cost of £240mn to the taxpayer.

That same year, Cameron also hinted at where his real priorities lay by rejecting plans requiring homeowners to make their properties more efficient before building extensions. Then in 2013 the infamous ‘cut the green crap’ moment when Cameron shed his green persona like an old T-shirt and axed various environmental initiatives, including on home efficiency.

The results were immediate and catastrophic. Rates of loft insulation fell off a cliff, from a healthy 1.6mn a year to less than 200,000. According to analysis by the Energy and Climate Intelligence Unit, this move will cost each household £170 when energy bills go up this spring. Cutting the green crap has left many homeowners up the proverbial creek.

But Cameron’s government wasn’t yet done with the nation’s homes. His chancellor, George Osborne, who had already tried to increase our dependency on gas with his infamous “dash for gas”, quietly slipped through a policy change that was to have long-lasting consequences.

Without any consultation and following lobbying from developers, he scrapped the zero-carbon homes target a year before it was supposed to kick in. This move was so regressive that, five years later, Boris Johnson’s government brought in a new, much weaker target to cut just 30% of CO2 from new-build homes -– a far cry from zero-carbon homes.

Not to be outdone by his predecessors, Johnson also needed his very own efficiency scheme to bungle. Last year he rolled out a £1.5bn new scheme, the green homes grant, as part of his Build Back Better plan. It collapsed six months later thanks to unrealistic timetables, botched design and the fact that the government did not listen to industry warnings. Plus ça change.

How to make homes more efficient and reduce energy bills

Just as well then that the prime minister is about to unveil a new energy security strategy. So wide-ranging is this plan supposed to be that’s been dubbed the ‘everything strategy’ [paywall]. Government briefings have touched on wind and solar, new nuclear, more oil and gas from the North Sea… even fracking.

It’s staggering then that as far as we can tell right now, this ‘everything strategy’ has virtually nothing to say about fixing our homes. It’s even more staggering when you consider the avalanche of benefits warmer homes can bring, such as lower bills and less reliance on gas imports (including from Russia).

It will also lower carbon emissions, and improving energy efficiency also happens to be the cheapest way to cut planet-roasting carbon. Cutting energy waste from homes will have a bigger, quicker impact on bills and energy security than new gas fields in the North Sea. 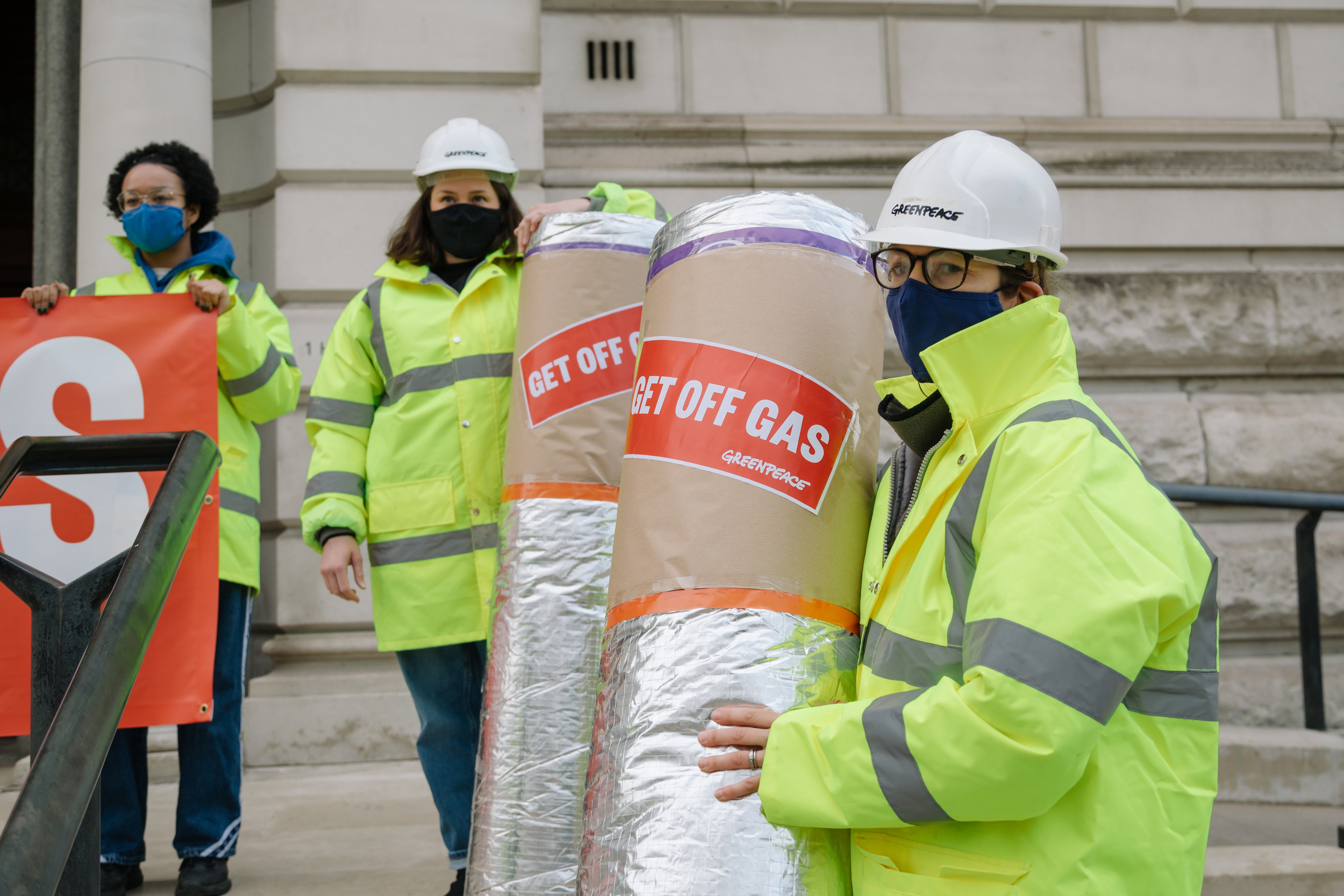 Greenpeace activists outside the Treasury, showing the chancellor that getting off gas means better energy efficiency measures such as loft insulation © Marie Jacquemin / Greenpeace

The road to our gas dependence has been paved with wrong-headed policies, bungled schemes and an ideological bias in favour of gas. But the road out is clear. Ministers have to learn from previous mistakes and design an ambitious, well-funded warm homes programme that works for both industry and homeowners.

This is why Greenpeace is urging the chancellor and the prime minister to use the spring statement to roll out a £10bn emergency energy package. This will fund heat pump installation, better home insulation targeted on low-income households. They also need to set ambitious targets, upgrading seven million homes by 2025 and training tens of thousands of engineers and energy experts to do the job.

And of course, we need to stop using gas. The government needs to remove all barriers to clean energy like solar and wind power so they can replace fossil fuels. Finally, they should bring our power grid into the 21st century so we can better share energy between European countries and store it to balance supply when the wind doesn’t blow and the sun doesn’t shine.

How we get out of the mess we’re in is no riddle – we just need our politicians to have the will to make it happen.