THE UK government will be up in court tomorrow [WEDS 1] as Greenpeace challenges its decision to grant BP a permit to drill for 30 million barrels of oil without taking climate impacts into account.

In a landmark case that will cause much embarrassment for the government just two months before it hosts global climate talks in Glasgow, Greenpeace will call for the government’s decision to be overturned, and for BP’s permit to be revoked.

It is the first time an offshore oil permit has ever been challenged in court. If Greenpeace wins, the ruling from the Court of Session, Scotland’s highest civil court, could have huge ramifications for how the UK government makes future oil permit decisions. For example, it could have implications for the imminent decision on controversial proposals to open new wells in the Cambo oil field.

BP’s permit must be revoked, and Cambo must be stopped

Mel Evans, head of oil and gas transition at Greenpeace UK, said: “It’s outrageous that the UK government routinely rubber stamps oil permits – like this one and the proposed permit for Cambo – while completely ignoring the climate impact, which causes extreme weather and deaths.

“We hope the judge will agree that legally this cannot be allowed to happen. It makes no sense  for the government to overlook the most harmful consequences of oil and gas when making these decisions.

“We are two months away from hosting global climate talks, and we’re at code red for humanity. BP’s permit must be revoked, and Cambo must be stopped. By setting a clear path to phasedown oil and gas the UK government must then properly support workers and communities through the energy transition.”

If the BP permit is revoked, the case could set a precedent requiring the government to assess emissions that come from burning fossil fuels, before granting future oil drilling permits. This could mean that no future permits could be approved, because experts at the International Energy Agency and conclusions from the latest IPCC report indicate that governments must rapidly phase-down fossil fuels [1].

Tomorrow’s case comes after Greenpeace staged a major protest against BP in 2019, where activists blocked the company’s contracted rig for 12 days at sea on its way to the Vorlich field. 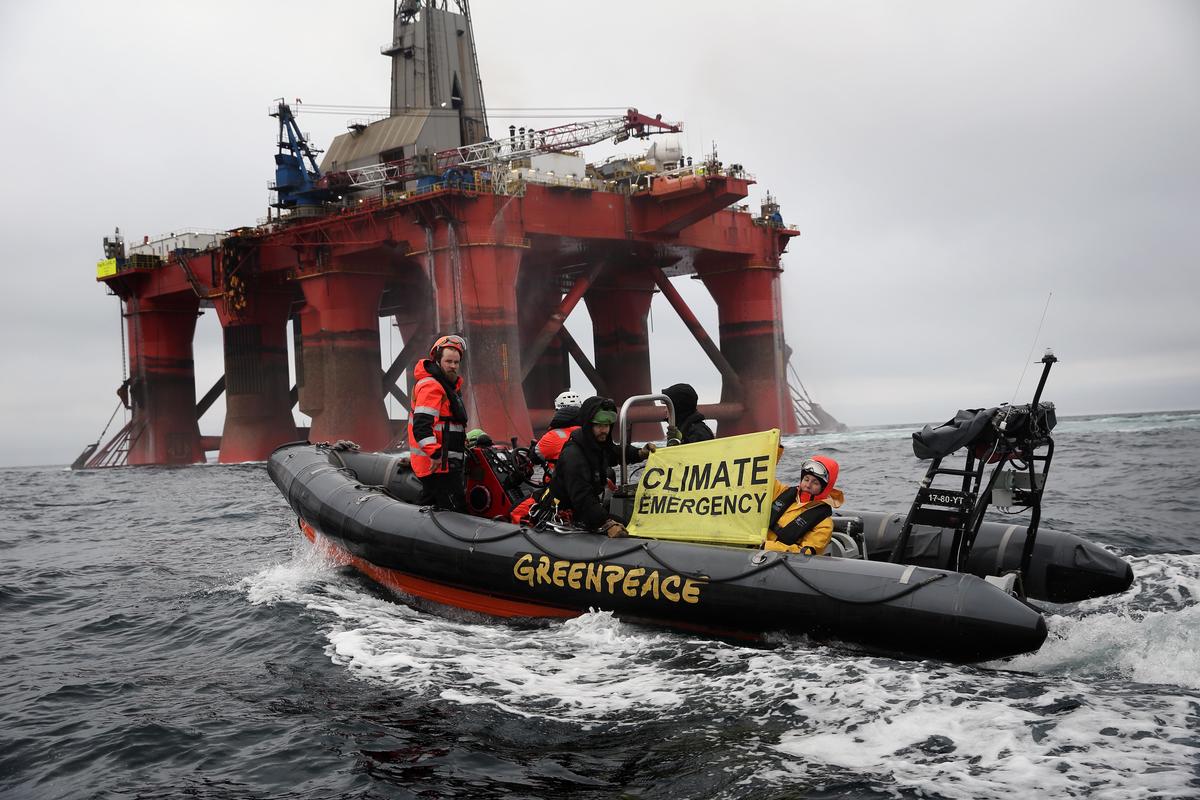 Greenpeace will argue that when the government granted BP’s drilling permit, it failed in its legal duty to check what impact that would have on the climate. As part of the permit process, the government is required to do an Environmental Impact Assessment, in which a company’s environmental statement is published and put out for public consultation. This process must consider the environmental impacts of a proposed oil or gas project, in the context of other projects with similar, cumulative environmental impacts – including emissions resulting from burning the fossil fuels extracted.

In March, the government promised to undertake “climate compatibility checks” for future licences, but these would not apply to permits – like Vorlich or Cambo. And the government hasn’t yet launched any kind of consultation on what these checks should entail. If these proposed checks do not extend to emissions resulting from burning the oil extracted, then they will go no further than the inadequately implemented processes already in place.

The licence for the Vorlich field was granted in 1981, when no obligations or legislation existed to regulate climate impacts. Therefore unless these emissions are considered in the permitting process, it will not be considered by the government at all – which in today’s context is an abhorrent failure of duty.

Another element of Greenpeace’s argument is that the government failed to assess how much flaring would take place as a result of this permit being granted. BP mis-stated its expected flaring in its initial application, and underestimated the flaring by 10 times, in what appears to be a clerical error [3]. The government failed to notice this mistake as part of its permit process.

This week’s court case is the latest in a string of legal battles where campaigners are holding governments and oil companies to account for their policies on fossil fuels in the face of climate destruction.

The UK government is facing a second legal challenge from campaigners at Paid to Pollute, over its policy of granting state aid to oil companies. And in May, a Dutch court ordered Shell to cut its oil production by 45% by 2030.

Greenpeace has written to the government warning that if it decides to approve an oil permit at Cambo, it will launch a legal bid to overturn the decision.

The hearing will take place via weblink over two days from the Edinburgh Court of Session, before the Lord President, Lord Menzies and Lord Pentland.

The Business, Energy and Industrial Strategy department and the Oil and Gas Authority will have to defend their actions. Greenpeace’s legal arguments will be made by Ruth Crawford QC.

The UK Government will be represented by Roddy Dunlop QC and John MacGregor QC.

BP and Ithaca Energy will be represented by Jim Cormack QC of Pinsent Masons.

[1]  The IEA has said there can be no new oil or gas investments beyond projects already underway in 2021 if we hope to meet the goals of the Paris Climate Agreement. And Antonio Guterres, UN secretary-general has said the latest climate report from the IPCC “must sound a death knell” for fossil fuels.

[2] Burning 30m barrels of oil would create approximately 12.7m tonnes of CO2, the equivalent of 3.2 coal plants running for one year.

[3]  In BP’s environmental statement (table 5-6) they said they would flare for the equivalent of four days per year, and said that equated to 1,572 tonnes of oil and 690 tonnes of gas.

But over the lifetime of the project (10 years) they gave the exact same figures (when really that should be times by 10).

Why is the case being held in Scotland, if the permit decision was made by the UK government?

Decisions about oil permits are taken by the Oil and Gas Authority, part of the Business, Energy and Industrial Strategy Department of the UK government.

Although Westminster ultimately holds the power on these decisions, the oil well (subject of the permit) is in Scottish jurisdiction, and Regulation 16 of the Offshore Petroleum Production and Pipelines (Assessment of Environmental Effects) Regulations 1999 says the case must be taken in Scotland.